Representatives of the Governments of Central Asian countries, the European Union and EU Member States responsible for environmental, climate change and water policy, international, regional and non-governmental organizations will hold the Seventh EU–Central Asia High-level Conference in Rome on 23-24 February 2023.

The Head of Cooperation of the EU Delegation to Kazakhstan Johannes Baur told DW about the issues to be considered during the conference and about the EU agenda in the Central Asian region in the field of alternative energy.

The full text of the interview can be found here: EU Representative – Our focus in Central Asia is energy efficiency and renewable energy

The EU supports the initiatives of the Central Asian countries to adapt to climate change and reduce greenhouse gas emissions. And according to the diplomat, the EU can share good practices that can be replicated in Central Asia. 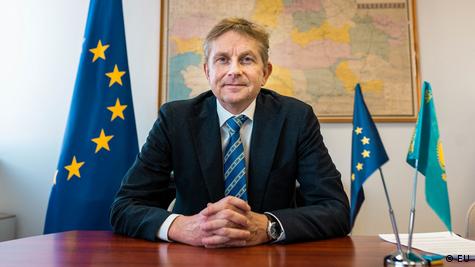 He recalled that EU member states such as France, Italy and Germany, as well as the European Commission, are already implementing a number of projects in the field of water, energy and climate change in Central Asia. A number of them are financed by the EBRD (European Bank for Reconstruction and Development) and the EIB (European Investment Bank).

Last November, the Team Europe initiative on water, energy and climate change was launched, which will link all existing initiatives to achieve a better effect.

“The initial total contribution of the EU to this initiative is 50 million Euros. Contributions from EU member states will add another 150 million Euros. These funds will increase due to new projects that will appear in the coming years. From the EU side, we will have additional funds for investment guarantees,” Baur said.

The EU representative also mentioned the need to develop a legal framework for cooperation between the Central Asian countries in the field of water and energy resources.

“According to European experts, in principle, there are enough water resources in the region, but there may be situations of water scarcity. A more efficient water distribution system is needed. We are certain that broad cooperation on joint water resource management is the only option. This also true for energy resources,” he stressed.

In general, the main focus of the EU in the Central Asian region remains the support of renewable energy and the promotion of energy efficiency.

He went on to add that, unlike Europe, there are vast areas in Central Asia suitable for the development of renewable energy power plants, but this potential has yet to be realized.

Answering a question about Europe’s willingness to invest in the development of alternative energy in Central Asia, Johannes Baur explained that the governments of EU member states and EU institutions are ready to aid, including through technical assistance. European banks and corporations are also interested in investing in regional projects. ///nCa, 25 January 2023