This is Part Four of the chapter on Turkmenistan of the recently issued CAREC Energy Outlook 2030 report.

The complete report is available at this link: https://www.adb.org/sites/default/files/publication/850111/carec-energy-outlook-2030.pdf

Priority technologies in Turkmenistan were selected based on the country’s targets and its commitment to including more renewable energy sources in the mix. Priorities also include the modernization of the natural gas-based power system, as it has a critical role in electricity generation.

Turkmenistan has tremendous potential for harnessing solar energy. With more than 300 sunny days annually and with average annual intensity of solar radiation ranging between 700–800 watts per square meter (W/m2), the total technical potential of solar energy amounts to 655 GW (Seitgeldiev 2018; UNDP 2014). The overall economic potential of solar energy is strengthened by the fact that the gas sector suffers from significant losses because of gas leakages; hence, diversifying the energy system to include more renewables would be a partial solution to this problem. Although the country has not yet developed any large-scale solar photovoltaic (PV) projects, companies specializing in off-grid systems are present in the market, and some remote regions are using solar installations as a substitute for diesel generators.

Moreover, the government’s focus on the further development of renewable energy projects, as well as the high silicon content in the sands of the Karakum Desert, might enable the country to position itself as a production center for solar PV panels. Overall, the development of solar PV represents a significant technology transfer opportunity. Because the introduction of solar PV would mitigate the country’s reliance on natural gas-powered generation, it would also have a large impact on decarbonization efforts.

The technical potential of wind power in Turkmenistan is estimated at 10 GW of capacity. This potential remains unexploited as the country has no large-scale wind power projects to date. Together with solar PV, wind power can help the government to achieve its aim of diversifying the power mix and partly transition to renewable energy sources. The coast of the Caspian Sea is known for its strong winds and is the region with the highest potential for wind farming in the country. Due to the country’s lack of a technological base, there is significant potential for technology transfer. Moreover, the decarbonization impact of this technology is significant given the absence of renewable energy generation in the country.

Turkmenistan’s electricity generation mix is made up only of natural gas-fired power plants. While the country is modernizing its existing plants and adding new high-efficiency units to decrease carbon emissions, it recognizes the need to further reduce its carbon footprint as a large part of the power generation infrastructure requires modernization. As the government strategy involves the gradual expansion of renewable energy sources, natural gas-fired power plants would help to ensure a stable supply during the transition period.

Turkmenistan’s T&D system is characterized by high losses and is in need for rehabilitation and increased preventive maintenance.

Turkmenistan’s electricity T&D losses are above 16%. Increasing efforts to maintain and rehabilitate the grid should be prioritized to decrease power outages, which would in turn allow for higher electricity exports. Moreover, significant expansion and modernization efforts are required to ensure the proper integration of intermittent power generation facilities, which are planned by the government. The country has already taken steps toward modernizing its current T&D infrastructure by introducing smart grids for public lighting systems in Ashgabat, and by introducing a SCADA system with the aid of international development partners. It should also consider modernizing its natural gas grid. Since natural gas is the country’s primary energy supply source, introducing advanced metering infrastructure would allow for proper data collection regarding losses, and overall rehabilitation efforts would decrease leakages into the atmosphere.

Given that energy efficiency measures in buildings would benefit both the residential and services sectors, the government as well as private investors should prioritize this area. The government has already taken an active role in launching several energy efficiency projects, including energy audits in Ashgabat, Turkmenbashi, Adaban, and other cities. These have prompted revisions to building standards and automatic temperature regulators in some homes. Moreover, modernization efforts that may be considered include basic construction elements, such as roofs, unheated cellars, and frame fillings.

Implementing building energy management systems and shifting toward smart metering are other known technologies that could significantly reduce energy consumption in Turkmenistan.

Turkmenistan demonstrated its commitment to tackling climate change in issuing the National Program on Climate Change in 2012. The country showed further commitment and solidarity with global efforts to reduce GHG emissions by submitting an intended nationally determined contribution (INDC) in 2016.

Turkmenistan has established both conditional and unconditional targets, with the key difference being the provision of technological and financial support from developed countries. In case such support will be provided, Turkmenistan has committed to ensuring that GHG levels will not grow beyond 2015 levels and may even be reduced by 2030 (UNFCCC 2016). However, the country has not identified a definite target. Without external support, the government foresees that the GHG emissions rate will lag behind GDP growth, and total GHG energy-related emissions will reach about 122 million tons of carbon dioxide (CO2) equivalent by 2030.16

The carbon emission outlook for Turkmenistan demonstrates that the government has set a reasonable, unconditional target. Its unconditional target is reached under all scenarios, even while assuming the steady growth of GHG emissions due to heavy use of natural gas in the primary energy supply. The Government Commitments scenario assumes an increase in renewable energy sources in the country’s power generation mix and, therefore, projects about 115 million tons of CO2 equivalent by 2030. The BAU scenario assumes that no changes in the power generation mix will occur, and that no renewable energy projects will be implemented; therefore, 117 million tons of CO2 equivalent are projected by 2030. The Green Growth scenario projects the lowest energy-related emissions growth rate because of additional investments in energy efficiency measures and the implementation of renewable energy projects, resulting in 113 million tons of CO2 equivalent by 2030 (Figure 96). 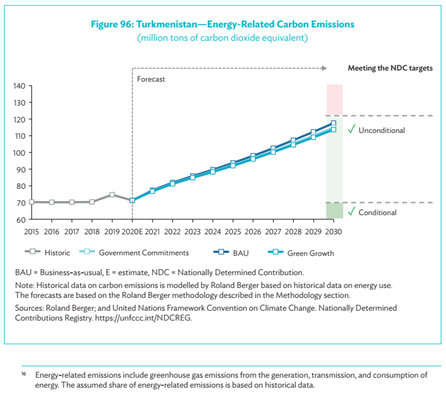 Infrastructure investment needs in the energy sector until 2030 vary across the three scenarios: the

Turkmenistan’s energy sector faces a variety of challenges that need to be addressed to ensure the efficient development of the energy market and the establishment of a favorable investment climate.

Sizeable subsidies had provided Turkmen citizens with free electricity, gas, and drinking water since the 1990s. More recently, the government has started implementing gradual tariff reforms. With a view to developing a free market economy, the President of Turkmenistan signed the Decree prescribing the abolition of free supply of electricity, gas, potable water, and table salt to citizens as of 1 January 2019 (Radio Free Europe/Radio Liberty 2018). This is expected to reduce the country’s high energy consumption per capita and can be considered as one of the first steps to increase recovery of costs related to energy infrastructure and services. Studies have shown that a share of major household appliances (including electrical bulbs, air conditioners, and other electrical devices) account for more than a quarter of total domestic electricity consumption, indicating a significant need for energy efficiency improvements.

Although the development of renewable energy was identified as a government priority in the National Program on Climate Change in 2012, private sector participation in energy generation has not reached sufficient maturity to fully implement this priority. The process of registering a business requires a set of formalities, which may, in some instances, consume dedicated times such as the evaluation and approval of a new business by the interministerial commission. However, the government is currently introducing more regulations regarding the digitalization of the procedures, which demonstrates its commitment to speeding up the process in the future. With almost 670 GW of potential technical capacity, renewable energy can lead the country’s climate change mitigation efforts and, in turn, increase both natural gas and electricity export capabilities.

Given the country’s significant natural gas reserves, the exploration and production sectors present an investment opportunity. However, with growing ambitions in global climate targets, additional gas capacity is expected to be subject to more stringent environmental criteria in its operation and as a condition to receive financing. 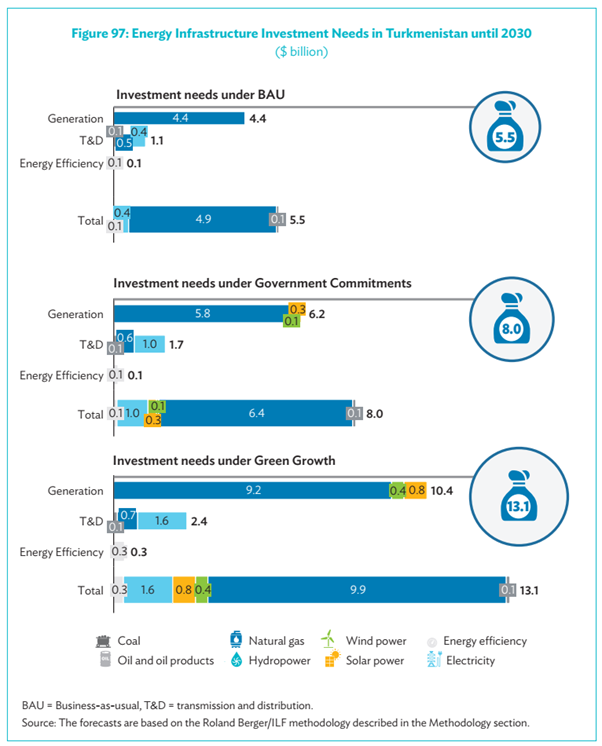 Turkmenistan has significant hydrogen production potential, given its large natural gas reserves and the existence of local demand centers for hydrogen fuel (e.g., gas-fired power plants, petrochemical plants, and other industrial plants). Recognizing the considerable potential of hydrogen, the country is taking initial steps in this direction. For instance, in 2021, during a high-level United Nations Global Roundtable, Turkmenistan’s leadership identified the development of an international road map for hydrogen energy as an energy sector priority and emphasized the country’s readiness to begin expert discussions on the methods and criteria for implementation. The government plans to continue exploring the possibility of hydrogen production in the country (Central Asia News 2021). While “green” hydrogen is often seen as more sustainable, the maturity of “blue” hydrogen technology is higher. The development of both blue and green hydrogen projects would result in substantial technological advancements for the country and would have positive impact on decarbonization. The success of such initiatives will largely depend on the participation of private sector players. /// nCa, 24 January 2023