On Wednesday, 9 November, President Serdar Berdimuhamedov led the commissioning ceremony of a complex of drainage facilities in the suburbs of Ashgabat.

Taking into account the geographical location of Ashgabat, which stretches at the foot of the northern slopes of Kopetdag, falls into the zone of influence of mudflows.

In this regard, commissioning a complex of mudflow structures will allow solving several tasks, including diverting the mudflow or passing through a protective object, protecting the channel of mudflow pipelines from erosion, and mitigating the flow’s impact on nearby territories.

Technical characteristics of the object

The project was implemented by the Russian company Vozrozhdenie and involved Russian and Turkmen design institutes – Sevkavgiprovodkhoz and Türkmensuwylymtaslama, as well as the Scientific Research Institute of Earthquake-Resistant Construction of Turkmenistan.

The total length of the complex is 49 kilometers. 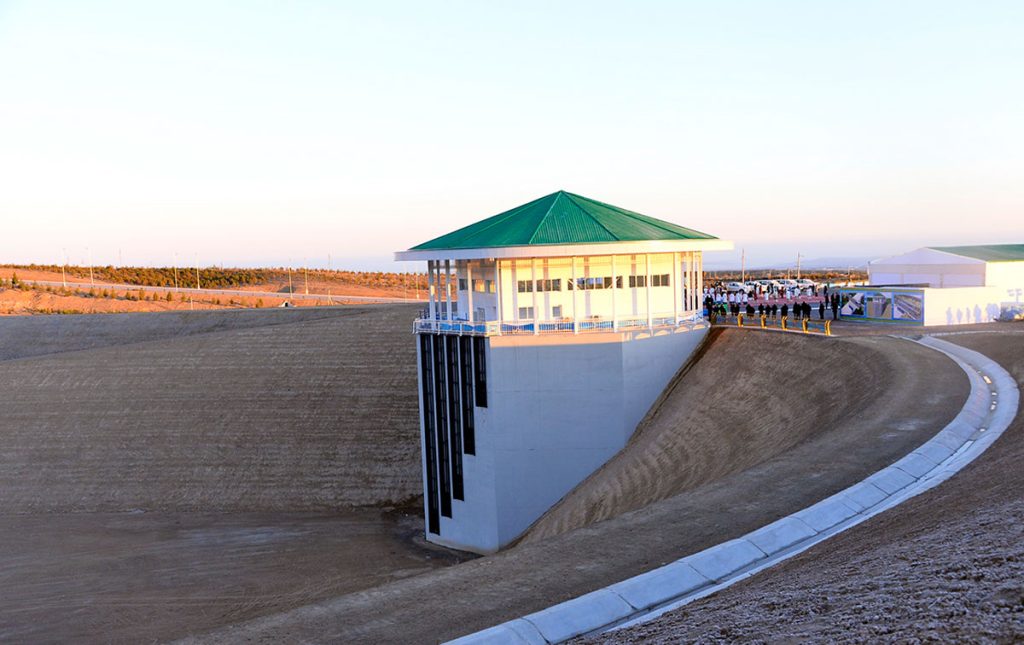 During the construction of the complex, 36 million cubic meters of natural sand and gravel were extracted, 9 water drains were built along the mudflow channels. Large-volume reservoirs designed for crushing impurities, filtration and obtaining clean water have been built along the drainage channels.

To ensure reliable waterproofing, more than 9 million meters of innovative composite reinforcement as well as more than 540 thousand square meters of reinforced geomembrane were used. 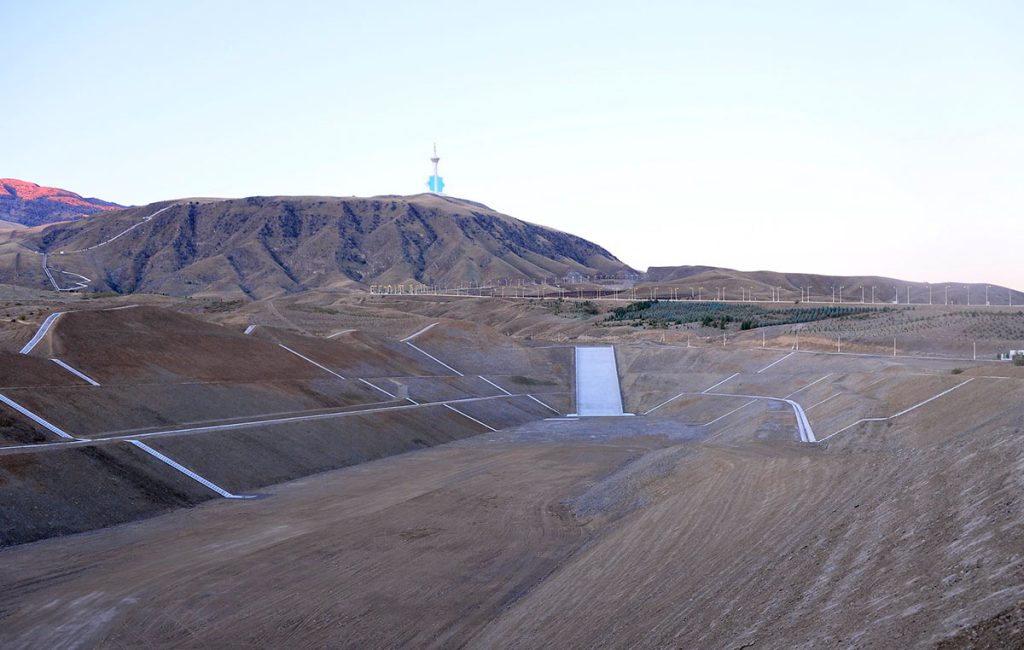 30 latest generation submersible water pumps from German manufacturer “Wilo” coated with a special innovative nanoceramic composition allow sand and small stones to pass through the pumps alongside water without affecting their stable operation.

9,100 meters of pipes with a diameter of 1 thousand millimeters were laid.

The operation of the catchment station consists of three stages. First, the water comes from the storage tanks to the first section. The second unit remains dry, valves are installed there that regulate the flow into the third chamber, from where it is pumped into concrete tanks. 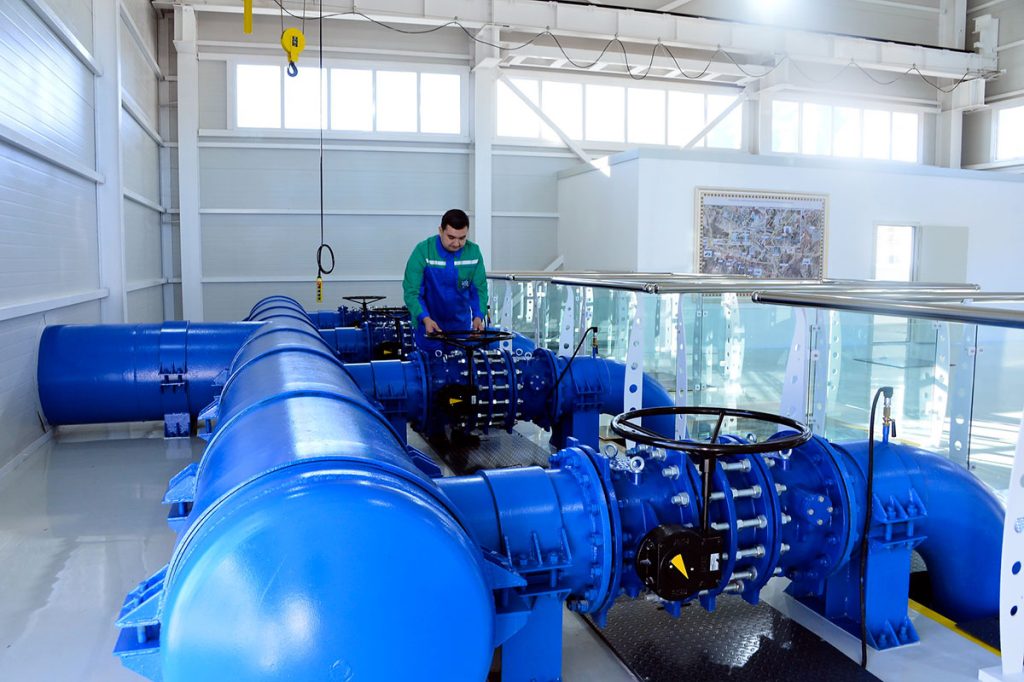 There are 3 working and one backup water pumps from the German company “Wilo” with a production capacity of 350 liters per second. The station also provides for the installation of a special crane with a lifting capacity of 5 tons.

Before starting the pumping station, the water in the channel of the second drain is cleaned according to the provided technology.

The water intake devices pressurize water to a height of 28 meters and send it to the water collector at a rate of one cubic meter per second via pipes with a diameter of 1000 millimeters. 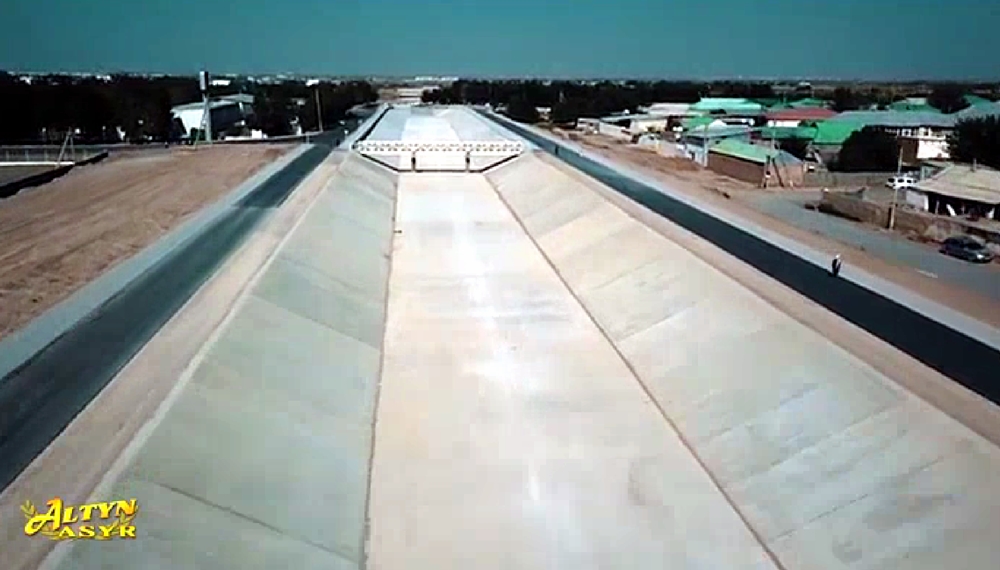 Flood waters from the northern and northeastern reaches of the Central Kopetdag flow into the second mudflow catchment. The mudflow accumulator with a volume of 1.029 million cubic meters is capable to collect water flows formed during winter landslides and storm drains. It is able to withstand the estimated seismic activity of 9 points without destruction.

Mudflow and precipitation waters can be led away along a single channel on the eastern side, outside of Ashgabat – into the canal and further to the Turkmen lake “Altyn asyr”. 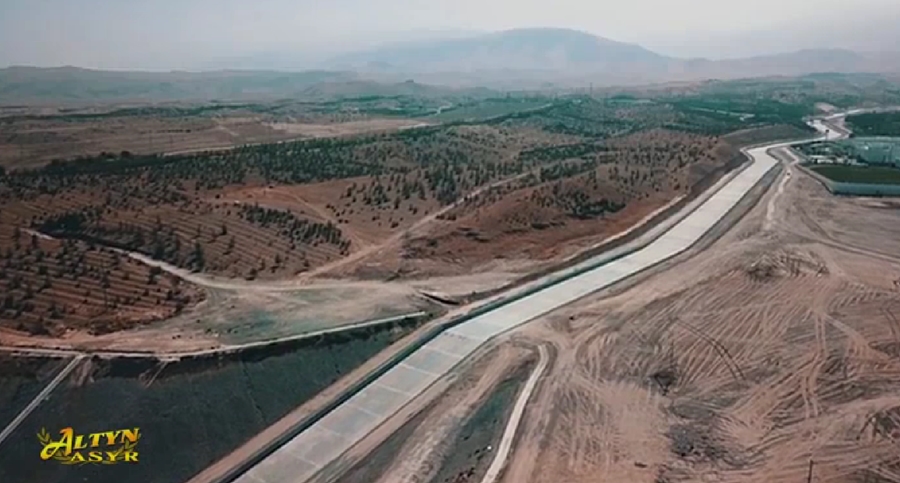 When the mudflow passes, a solid mass will remain in the water accumulator – clay, silt, sand, stones, and the filtered water will be diverted by a pump system. The hard mass of the mudflow can be easily cleaned and removed by dump trucks.

Innovations used in the construction of the system

The mudflow protection project concept provides for minimal interference with nature and low economic costs while adhering to all norms and standards in the construction of such structures.

Its uniqueness lies in its spatial location, taking into account the natural-climatic, structural-tectonic and engineering-geological conditions of the formation of mudflow basins of the Kopetdag mountains, accumulation of mudflow and stabilization of its channel.

The project is unique in that when laying mudflow channels, it was not necessary to rip up highways; instead, water will flow beneath them through pipes laid using directional boring technology. The natural mudflow channels, which are connected to the Karakum River, have been reconstructed as well.

The terrain and its natural and climatic features were taken into account during the construction of mudflows. The mud flowing down the mountain slopes has its own channel formed over the centuries, so the directions of the mudflow movement were studied in detail during the project’s implementation.

For the first time, basalt–plastic reinforcement was used at an object of this level – an innovative material that, due to its corrosion resistance, is ideal for hydraulic structures.

Due to the wide coverage of the territory, a special quadcopter drone was used for geodetic control, which significantly reduced the construction time.

Certification of a new facility

During the opening ceremony of the complex of anti-mudflow installations, the State Committee of Turkmenistan for Water Management was awarded the following quality certificates: 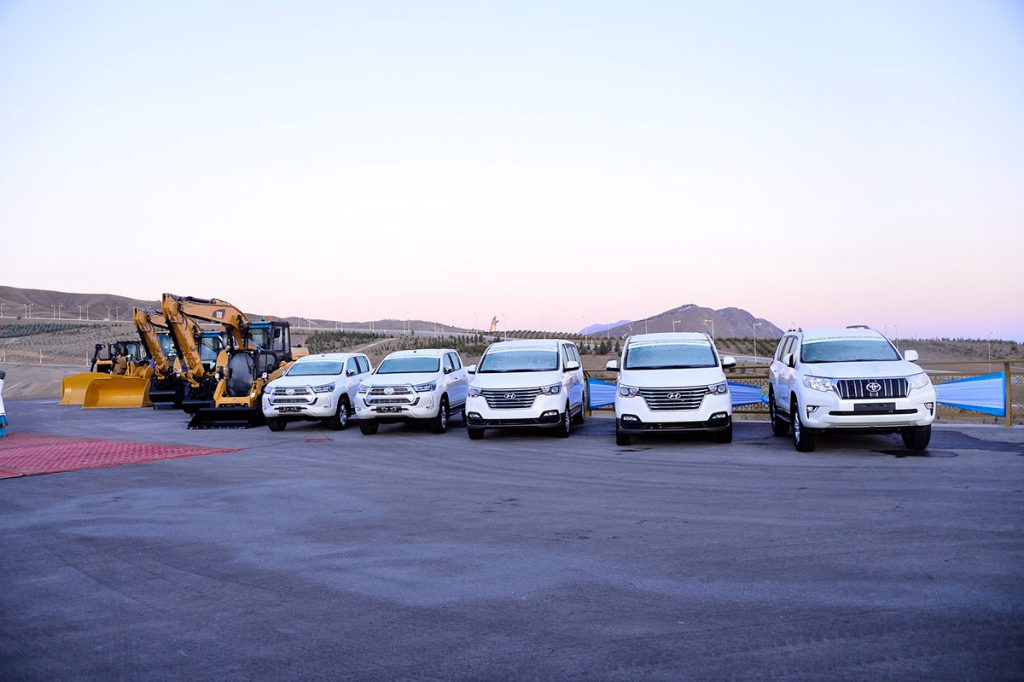