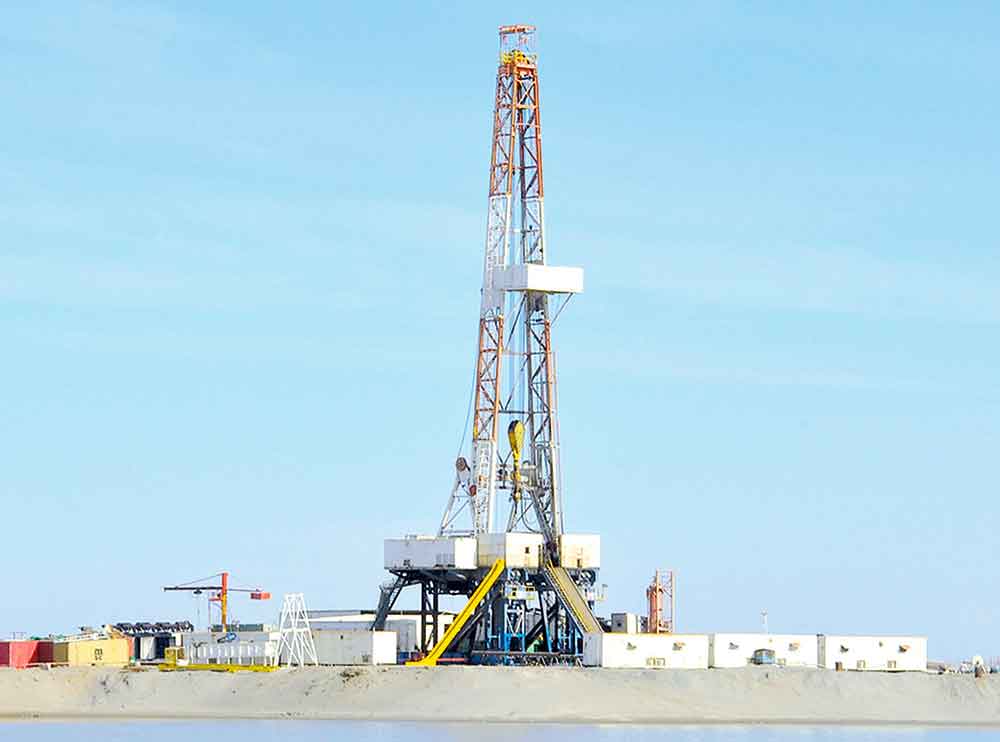 Turkmenistan implements the most recent advances in modern science and best practices in all sectors of the national economy, including the fuel and energy complex. The first appraisal well on the Cheleken Peninsula was drilled in a slant drilling method at the Eastern Cheleken field at the beginning of the year.

The volume of crude oil extracted from this onshore well, located in the shallow part of the Caspian Sea, reaches 10-12 tons per day, the newspaper “Turkmenistan” reports.

Currently, Turkmenoil Concern specialists are working with the Oil and Gas Research Institute on a project to drill another well with a total design depth of 2,650 meters. The well will be drilled vertically until a depth of 1600 meters, then slant-drilled until the design depth is reached.

This drilling method is not only economically cost-effective, but also technically and environmentally safe. This is explained by the fact that the main column of the drilling rig is located at a distance of 450-475 meters from the seashore, and after the specified limit the column will be directed towards shallow water. Another feature of this innovative drilling method is the possibility of extracting crude oil from the overlying layers after the development of the project horizons.

In January-October 2022, the volume of oil extracted from the wells of the Eastern Cheleken, run by the oil and gas producing management “Galkynyshnebit”, reached 48,638 tons. This indicator exceeds the targets set for this period by 2.6 thousand tons. The growth rate was 106.8% year-on-year.

In ten months, the company produced more than 425,000 cubic meters of associated gas, exceeding the plan by 213%.

Currently, the management runs totally 170 producing wells. The design depth of wells currently being operated in the continental part of the Cheleken Peninsula ranges from 1200 to 2750 meters.

According to geologists, there are considerable reserves of crude oil in the deeper layers of the peninsula. Their effective use will mark the launch of new developments in Cheleken.

The name of the Cheleken peninsula, derived from the words “char” and “kan“, means “four mines” or “four riches” (oil, ozokerite, salt, dye).

It is important to remember that Cheleken’s oil resources have a long history of industrial development. Although 1876 should be regarded as the beginning of oil production at the Cheleken field, black gold was first produced on Turkmenistan’s soil between 1742 and 1875. Historical records that Greek, Arab, and Russian travelers left at various periods fully confirm this fact.

In the 30s of the last century, Cheleken Island turned into a peninsula. The modern area of the peninsula, stretching from west to east for about forty kilometers, is five hundred square kilometers.

At the beginning of the 20th century, oil fountains literally shot out of wells drilled there from a depth of only two hundred meters. In 1949, drilling operations were started at the peninsula, and in 1950, an influx of oil was received from a depth of a thousand meters.

The Cheleken is geologically located in the Caspian lowland, its subsoil consists of Mesozoic and Quaternary sedimentary rocks. As a result of tectonic shifts, it was repeatedly subjected to horizontal and vertical faults, which caused the eruption of mud volcanoes from the deep layers and the accumulation of iodine-bromine waters.

For decades, the modern city of Khazar, located on the peninsula, has been mining iodine, bromine and iron.

The active exploitation of the mineral wealth of the Cheleken was continued in the years of independence. ///nCa, 8 November 2022