Home » How to save the Aral Sea? 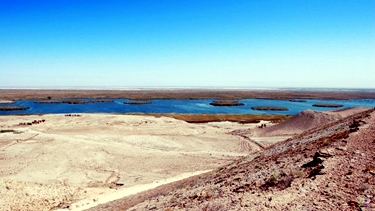 President of the Republic of Kazakhstan Kassym-Jomart Tokayev at the 4th consultative meeting of the heads of Central Asian states stressed the need to take decisive measures for the effective use of the water resources of the Aral Sea basin. As known, this meeting took place in the city of Cholpon-Ata, Kyrgyzstan, on 21 July 2022, and it was attended by President of Kyrgyzstan Sadyr Zhaparov, President of Tajikistan Emomali Rahmon, President of Turkmenistan Serdar Berdimuhamedov and President of Uzbekistan Shavkat Mirziyoyev.

In his speech at the meeting, the President of Kazakhstan stated the need to take concrete measures to ensure the efficient use of water resources in the Aral Sea basin against the background of current climate problems, increasing the need for water and energy resources. He also called on his counterparts to intensify cooperation between the countries within the framework of the International Fund for Saving the Aral Sea.

Nowadays, when the global climate change caused problems are acute, the discussion of the Aral topic at the 4th consultative meeting of the heads of Central Asian states was also relevant.

Unfortunately, the ecological catastrophe of the drying up of the Aral Sea, which the Central Asian countries inherited from the Soviet Union since the 1960s, continues to this day. Many other factors have a negative impact on the health and well-being of people in the region, including those related to desertification, changes in river cycles and global climate change.

Although the Aral Sea problem is located on the territory of Uzbekistan and Kazakhstan, it causes environmental damage to other countries of the region and even remote corners of the world. For this reason, neighboring countries, as well as the United Nations, conduct various studies on the improvement of the reservoir. International experts note the need for a constant open dialogue between the countries of the basin, the search for mutually acceptable solutions, mutual consideration of interests, and urge neighbors in the region to take joint action on the environmental problem of the Aral Sea.

The regional countries have set up two organizations to promote dialogue. One of them is the Central Asian Interstate Coordinating Water Management Commission (ICWC), established in 1992. This group celebrated its 30th anniversary at a meeting held in Turkestan, Kazakhstan, on 26 April 2022.

Secondly, in 1993 Turkmenistan, Kazakhstan, Kyrgyzstan, Tajikistan and Uzbekistan jointly established the International Fund for Saving the Aral Sea (IFAS). In March next year, the 30th anniversary of this Fund, which serves as a platform to solve common water management, environmental and socio-economic problems, will also be celebrated.

However, it is not without incidents from time to time. For example, Kyrgyzstan has decided to “freeze” its participation in the work of IFAS since 2016. However, it is pleasing that recently the “ice” has begun to melt. Since last year, official representatives of relevant ministries and departments of the Kyrgyz Republic have been actively participating in the activities of the Working Group on Improving the Organizational Structure and Regulatory Framework of IFAS and present official positions and recommendations of the country. It would be useful to move forward and have Bishkek take the next chairmanship of the Fund and coordinate the transformation process.

Another problem that environmentalists focus on for the Central Asian region is violations of international water law. All Central Asian countries have agreed to abide by the approved plans and established principles of water distribution, which more or less maintain the water balance of rivers and lakes. Despite this, some countries of the Syr Darya River basin continue to build new hydroelectric power plants independently without coordination.

This has a negative impact on efforts to save the Aral Sea. Because the water in the Northern Aral or the Small Aral comes only from the Syr Darya.

In addition, natural or man-made pollution, destruction or accidents at reservoirs in the upper and middle reaches of the Syr Darya directly affect the lower reaches. This creates an imminent threat of flooding or destruction for settlements and agricultural land in these areas.

In conclusion, it can be said that preventing major environmental problems and other disasters related to the Aral Sea is linked to the close cooperation of the countries of the region in this regard. Solving this problem requires coordination of joint actions and strict adherence to the strategic plans. Of course, this is the most necessary thing to save the Aral Sea. The fact that this issue was raised during the 4th Consultative Meeting of the Heads of Central Asian States is encouraging. /// Önce Vatan Gazetesi, July 29, 2022 (Link to the original article https://www.oncevatan.com.tr/aral-denizi-nasil-kurtarilacak-makale,54932.html )