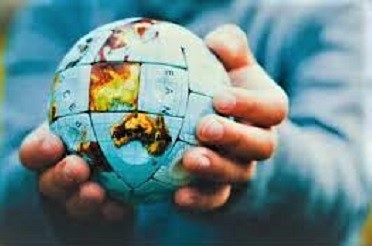 This pesky world order collided with the iceberg called 2021. As is the nature of such collisions, much of the damage is below the water line.

Water is rushing through the gaping holes. This world order is sinking. Here is the summary of the damage report:

It was a uniquely sobering year. It started with the memories of previous year of people fighting in the American shopping malls for pallets of toilet paper. And, it is ending with the total number of diagnosed Covid cases exceeding 51 million and the deaths in excess of 800000 in the same USA. Yes, we are talking about one of the richest, most advanced and presumably most civilized countries in the world.

It was a singularly humiliating year for some. It started with the Americans talking to the Taliban with an attitude of superiority and it is ending with the Americans trying clumsily to cook an assortment of alphabet soups such as B3W, Quad, AUKUS, etc. without knowing the recipe and without any usable ingredients in the pantry, all the while desperately hoping no one remembers how they fled the Bagram Base and how they left behind the Afghans and dogs who served them loyally.

It was an eye opening year. The western world refused to recognize some Covid vaccines that were equal or superior to some of their own vaccines in efficacy, and definitely much cheaper. Some call it vaccine patriotism though its actual name is hypocrisy.

It was a year of shifting balance. It started with China and Russia offering to talk to the USA on the basis of equality and mutual respect. Apparently, it was too much to ask of the Americans groaning under their weight of ‘exceptionalism.’ It is ending with China and Russia calling the bluff and the USA and its allies reluctant to show their hand.

It was a year of upsets. The year started with the US Dollar pretending to be able to bulldoze almost every other currency. It is ending with the predictions that within the foreseeable future the Chinese Yuan will be able to replace the Dollar. Even the Turkish Lira that the dollar managers were confident they can crush has gained 30% against the dollar within three days after a short speech by Erdogan.

It was a year that redefined globalization. With e-commerce tools in the reach of everyone, the teenage entrepreneurs in their homes are giving tough time to multinationals.

It was a year that broke the spell. The western media and the western politicians habitually buffed each other’s narrative; polished it, rebranded it and resold it until they became mirror images of each other. They gazed into each other’s eyes lovingly and saw their own image. This mechanism of perception management was used for decades to shape the minds of the world. The spell has been broke by the social media. The majority of the younger people now consume their news through the social media.

It was a year that forced the world to face a single question – do we want more wars or more peace? When all the fancy jargon is deleted, the naked truth is that the USA and some of its allies are looking for ways to wage more wars. On the other hand, the rest of the world is groping for peace. Some countries, most notably China, Russia, and Turkey are successfully streamlining the partnerships for peace. Every country is making choices – War or peace? Cooperation or confrontation? Inclusion or exclusion? Progress or regress? Forward or backward? Me or we? ——- Quite clearly, the herd around the USA is thinning out.

It was a year that accelerated the early demise of the unipolar world order. It took Uncle Sam less than 30 years to unravel itself.

Of course, this wretched world order carried the seed of its destruction withinin its core.

An essential ingredient was missing from the chemistry of this world order: Basic Human Decency.

This needs a bit of explanation.

Lord Robertson, the Secretary General of NATO from 1999 to 2004 was arguably the last thorough gentleman to head this global war machine. Of course, the Secretary General doesn’t make the decisions to go to war – this is the prerogative of the member countries. However, as the most visible face of the alliance, he bears the political brunt.

I asked him as to what was his opinion on these as the Secretary General of NATO and also as a human being.

He squirmed in his chair, looked down for a few seconds, and said apologetically, “This human being happens to be the Secretary General of NATO too, so please allow me to speak in that capacity only.”

I had another conversation with someone who was a senior diplomat in the USSR and later the ambassador of one of the countries that emerged from the debris of USSR.

I asked him as to why, despite the limited resources of his country, he tries to help out Afghanistan in whatever way possible.

He said, “We feel responsible for what happened to Afghanistan and I think it is our moral responsibility to do whatever we can to repair the damage.”

Lord Robertson and the senior diplomat from the former USSR both showed the basic human decency, without which we cannot claim to be civilized people. In their different capacities, in their position at opposite ends of the spectrum, both were human first.

Just around that time, the basic human decency eroded rather fast from the pool of politicians leading the western countries.

Take, for example, the carefree use of the term ‘collateral damage.’ What does collateral damage mean? It means in plain language: we will kill innocent civilians and we will not feel any remorse.

Another term is ‘scorched earth policy.’ Scorched earth? Earth that is no more capable of supporting any life? What kind of sick mind came up with this term?

Yet another term is ‘donor fatigue.’ The layman explanation of this term is that I am tired of paying for the damage I caused intentionally and arrogantly.

Another popular term is ‘at the time and place of our choosing.’ This term is undoubtedly the product of a barbarian mindset.

What is missing here is the basic human decency.

More of this can be seen in the distribution of refugees.

According to UNHCR data currently there are more than 84 million forcibly displaced persons in the world, of which 26.6 million are refugees.

About 85% of refugees are hosted in the developing countries.

These are the countries that did not participate in smashing Iraq, Syria, Libya, Afghanistan, etc. Yet they are paying the social and economic cost for no fault of their own. Germany was only partially, and very reluctantly, involved in Afghanistan but it has shouldered more than a fair share of the burden of the aftermath.

The countries that participated wholeheartedly in the destruction of Iraq, Syria, Libya, Afghanistan, etc. are most vocal against the refugees. For them, the basic human decency is an alien concept.

There are many more examples of why this world order is doomed such as the moronic desire to place missiles at the border of Russia, the irrational antagonism toward the BRI of China, and the knee jerk reaction of slapping sanctions right, left, and centre at the slightest of pretexts.

Because of the inertia, this world order will keep rolling for now but will disintegrate while still in motion. The cause of death would be the depletion of basic human decency.

In due course, the world would be a better place. The USA and anyone else who loves the ‘shoulder-to-shoulder’ mantra would be outsiders for that world. /// nCa, 27 December 2021