You are here: Home / Articles And Reports / Ashgabat hosted Turkmen-Turkish summit talks – the countries intend to increase trade to US $ 5 billion

The summit talks between President of Turkmenistan Gurbanguly Berdimuhamedov and President of the Republic of Turkey Recep Tayyip Erdogan were held in Ashgabat on Saturday, 27 November 2021. Turkish leader arrived in Turkmenistan on a two-day state visit. 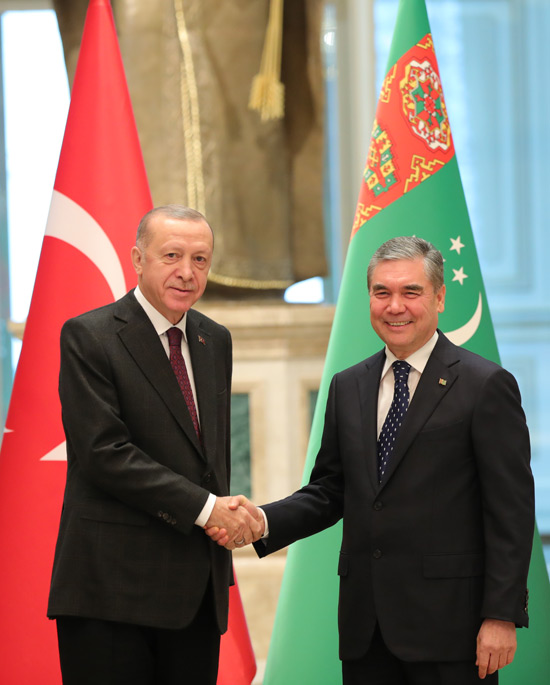 The parties held high-level talks in a one-on-one format and signed a package of documents. Then the heads of state briefed on talks a joint press conference.

Our country attaches great importance to the development of comprehensive ties with the Republic of Turkey, the head of Turkmenistan stressed, expressing confidence that the outcomes of the current summit are designed to strengthen interstate dialogue based on common historical roots and spiritual and cultural values of the two fraternal peoples. 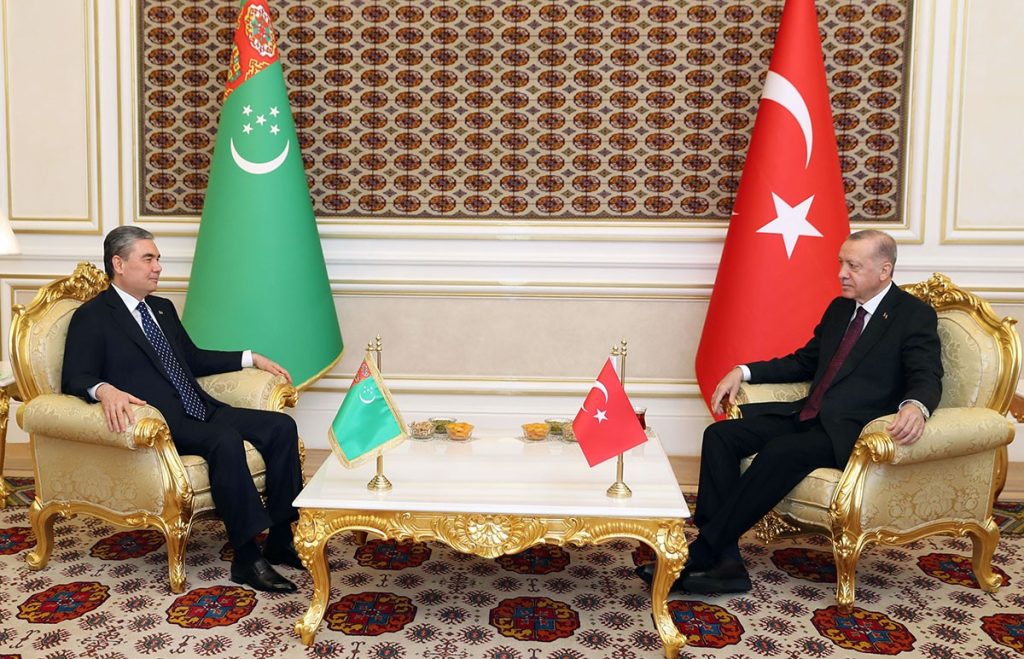 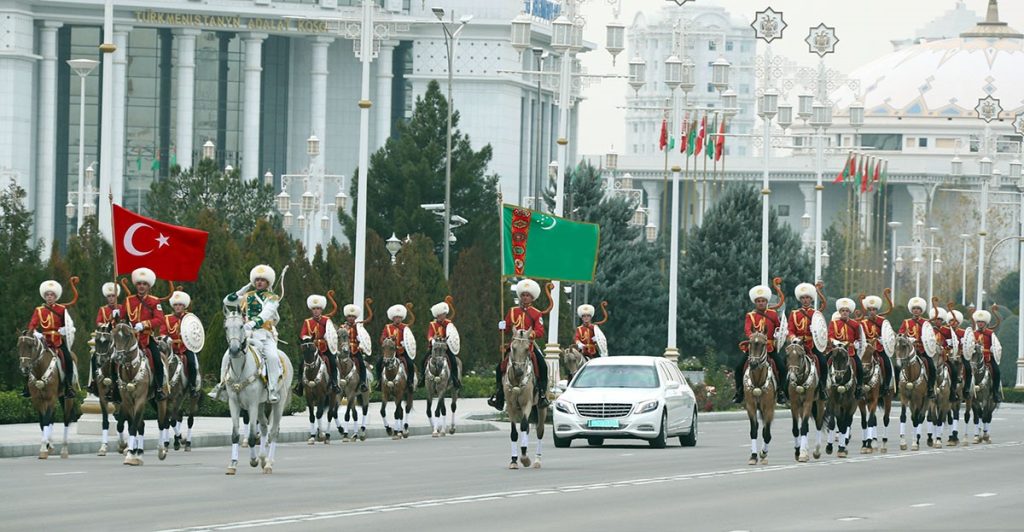 Presidents Berdimuhamedov and President Erdogan agreed that the current high level of cooperation between two countries has been achieved thanks to the steadily increasing mutual desire to deepen a sincere and trusting dialogue, enriching it with new content in the spirit of progressive changes.

The activities of the Intergovernmental Turkmen-Turkish Commission for Economic Cooperation were praised as well.

The following set of documents was signed after the tete-a-tete talks:

1.Cooperation Agreement between the State News Agency of Turkmenistan and the Anatolian Agency;

The presidents signed a Joint statement.

Speaking at a joint press conference, President Berdimuhamedov noted the coincidence or similarity of the views of Turkmenistan and Turkey on many issues of international politics, which is a clear confirmation of the successful interaction of the two countries on the world stage.

In order to effectively address the universal threats of our time – international terrorism, drug trafficking and transnational organized crime, our countries will continue to cooperate in specific areas. Such cooperation will be carried out on a bilateral basis and within the framework of international organizations, the Turkmen leader said.

Turkmenistan and Turkey will continue coordinated actions to stabilize the situation in Afghanistan, he added.

Referring to the economic partnership, President Berdimuhamedov said that an agreement had been reached on close cooperation and joint efforts in the creation of transport and transit corridors along the East-West route crossing the territories of the two countries.

In particular, we are talking about the Afghanistan-Turkmenistan-Azerbaijan-Georgia-Turkey corridor (Lapis Lazuli Corridor), the head of state said, stressing the importance of using the potential of the maritime infrastructure in the Caspian Sea, first of all, the Turkmenbashi International Seaport to establish transport links between the Caspian and Black Sea regions. 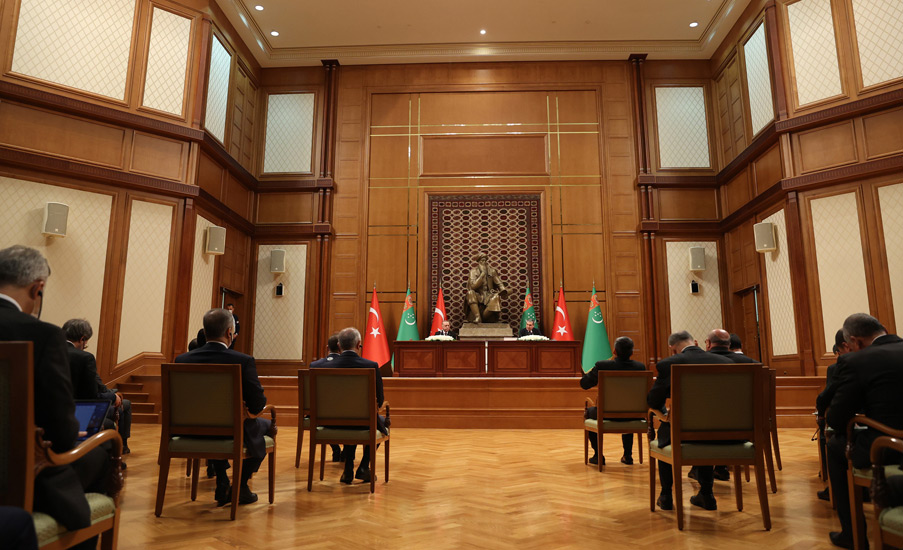 As for cooperation in the energy sector, an agreement was reached to intensify joint efforts to create a multi-vector system of energy supplies to international markets, he stressed.

In the cultural and humanitarian sphere, the countries agreed to hold Cultural Days annually alternately, and in the field of science and education to expand cooperation through higher educational institutions.

Turkmenistan and Turkey have once again confirmed their desire and commitment to long-term, promising and multilateral cooperation. This meets the fundamental interests of the peoples of our countries, serves their well-being and prosperity, makes a significant contribution to strengthening and maintaining peace, security and stability, President Berdimuhamedov concluded.

President Recep Tayyip Erdogan noted that the participation of President Gurbanguly Berdimuhamedov in the recent Summit of Heads of Turkic-speaking States in Istanbul and Turkmenistan’s accession as an observer to this Organization increased the importance of the forum.

Touching upon the trade and economic cooperation, Erdogan said: “We are determined to take the necessary steps to increase the volume of our bilateral trade to $ 5 billion at the first stage”.

As the Turkish leader noted, during the talks the sides exchanged views on further efforts to strengthen cooperation in the field of energy, as well as in the field of road and air transport.

“Also, within our strategic cooperation based on historical and cultural partnership, we have agreed on giving fresh momentum to our relations in such social areas as education, culture, youth and sports”, he added.

President of Turkey awarded the State Order of Turkmenistan

At the end of the press conference, ceremony of awarding the President of Turkey with the State Order of Turkmenistan took place. 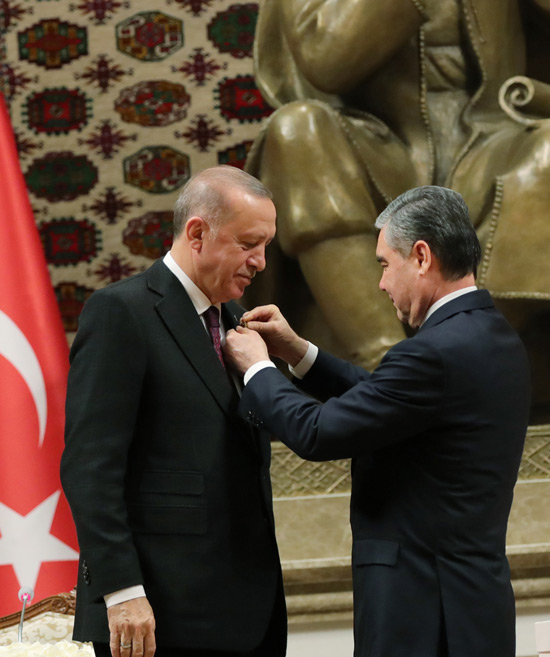 At the talks held in an atmosphere of friendship and mutual understanding, an exchange of views took place on a wide range of issues of bilateral cooperation, as well as on major international issues that meet common interests.

The heads of state noted with satisfaction the high level of bilateral relations of a strategic nature and based on the principles of inviolable friendship, mutual respect and trust. 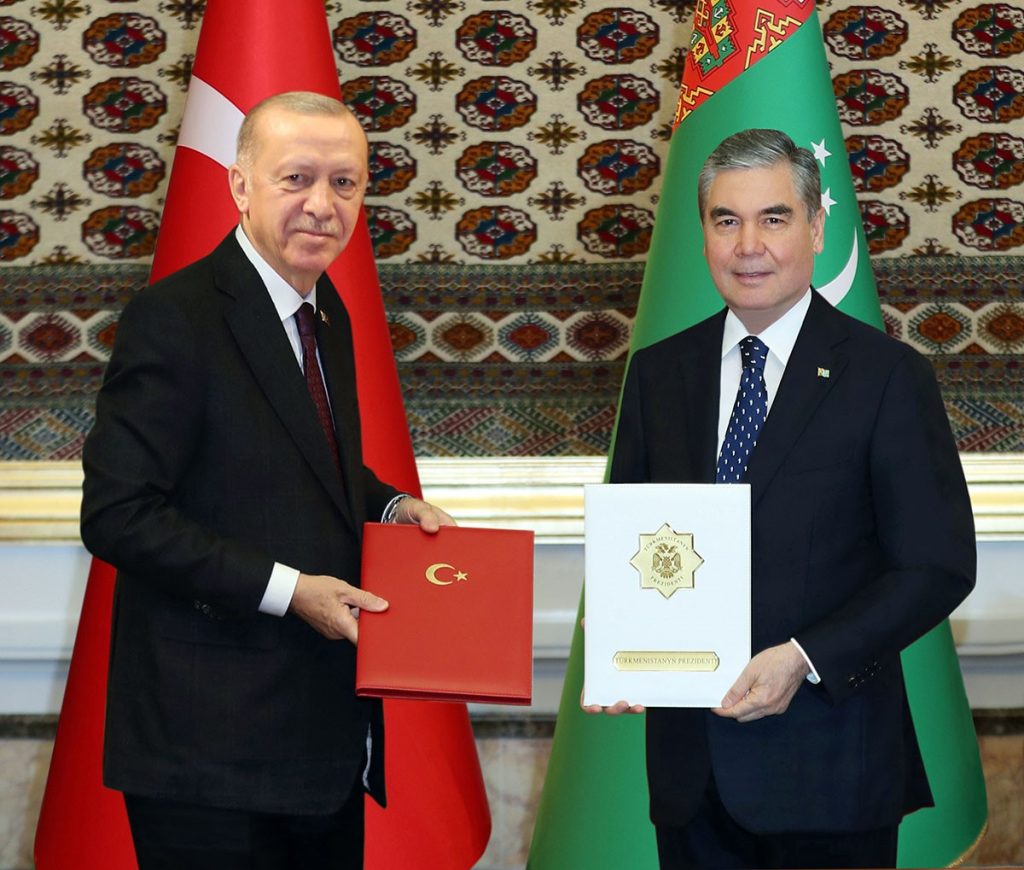 The presidents declared their desire and readiness to further comprehensively develop and strengthen the strategic partnership based on the historical and cultural community of the fraternal peoples of both states. A unanimous opinion was expressed that the further development of bilateral fruitful cooperation will serve to strengthen global peace, stability and economic prosperity of the two countries.

The Presidents noted with satisfaction the commonality of views on the main issues of international politics, confirming their desire to further develop mutually beneficial cooperation in the world space.

The Presidents stressed the usefulness of coordinating efforts within the framework of international and regional organizations, of which Turkmenistan and the Republic of Turkey are members. The Presidents noted the important role of the United Nations and its structures in addressing global issues, ensuring sustainable development, strengthening global security and stability.

Having noted with satisfaction the success of the VIII Summit of the Heads of the Turkic-speaking states held in Istanbul on November 12, 2021, in which Turkmenistan took part as an observer, the Presidents agreed to increase multilateral cooperation within the framework of the Organization of Turkic-speaking States.

The heads of state expressed confidence that a fruitful and mutually beneficial partnership between Turkmenistan and the Republic of Turkey serves the long-term interests of the peoples of both countries, as well as ensuring global and regional peace, stability and security.

The need to expand interaction in a bilateral format and within the framework of international organizations in the fight against terrorism, extremism, irregular migration, illegal drug and psychotropic drug trafficking, as well as against other global threats to international security was emphasized.

The Presidents noted the importance of building up mutually beneficial trade and economic cooperation between Turkmenistan and the Republic of Turkey.

In this regard, the Presidents confirmed the importance of a significant increase in the volume of mutual trade through the sale of products with high added value.

The heads of state noted the need to intensify the activities of the Intergovernmental Turkmen-Turkish Commission on Economic Cooperation, as a coordinator of the development of bilateral relations, and primarily in the trade, economic, transport and communication spheres.

The heads of state emphasized the importance of creating favorable economic, financial and legal conditions for entrepreneurs, increasing the possibilities of bringing their goods and services to world markets, and strengthening relations between the business circles of the two countries.

In this regard, the Presidents, emphasizing that investments are one of the main conditions for economic cooperation, stated that they will continue to provide mutual support to investments based on common interests and are ready to protect and stimulate them.

In order to increase the competitiveness and attractiveness of the international transport corridors running through the territories of the two countries, the Presidents, once again reaffirming their readiness to consistently promote mutually beneficial cooperation aimed at further favorable balance of price tariffs and the creation of favorable conditions for transit transportation of export goods, noted the need for the practical implementation of the Agreement on Transit and Transport Cooperation of November 15, 2017 (Agreement on the Lapis Lazuli Corridor).

The Presidents paid special attention to cooperation in the humanitarian sphere, noting the great importance of relations between relevant organizations, cultural and art workers, research centers, universities and the media. An agreement was reached on the development of cooperation in the field of science and technology, sports and tourism.

The Presidents emphasized the importance of increasing interaction between institutions in the field of prevention and treatment of infectious diseases, training of medical workers, production of vaccines, drugs and other medicines, as well as providing them to the population.

The Presidents noted the need to modernize and expand the legal framework of bilateral relations. In this regard, the heads of state noted the importance of the intergovernmental and intersectoral documents signed during the visit, which will serve to further build up relations between Turkmenistan and the Republic of Turkey.

President of the Republic of Turkey Recep Tayyip Erdogan