Home » Energy, investment and port cooperation are at the top of Turkmen–Emirati summit talks 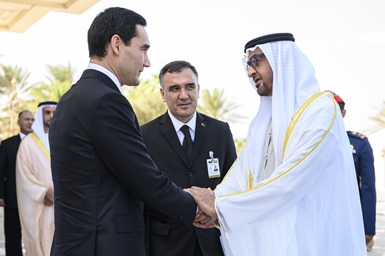 On 21-22 November 2022, President of Turkmenistan Serdar Berdimuhamedov is on an official visit to the United Arab Emirates.

The summit talks between the President of Turkmenistan Serdar Berdimuhamedov and the President  of the UAE Sheikh Mohamed bin Zayed Al Nahyan took place on the first day of the visit. The Turkmen leader also held meetings with other high-ranking officials.

The key topics of discussion were cooperation in the traditional fuel and energy sector, prospects for cooperation between the ports of Turkmenbashi and Abu Dhabi, investment partnership.

The parties signed a package of ten documents. In addition, a number of documents will be inked during the business forum today (22 Nov).

Talks in an expanded format

Welcoming the leader of Turkmenistan, UAE President Sheikh Mohamed bin Zayed Al Nahyan noted that the visit of the President of Turkmenistan and the current negotiations are given great importance in the context of further strengthening and development of interstate relations. As it was emphasized, the United Arab Emirates fully supports the constructive foreign policy course and creative initiatives of neutral Turkmenistan. 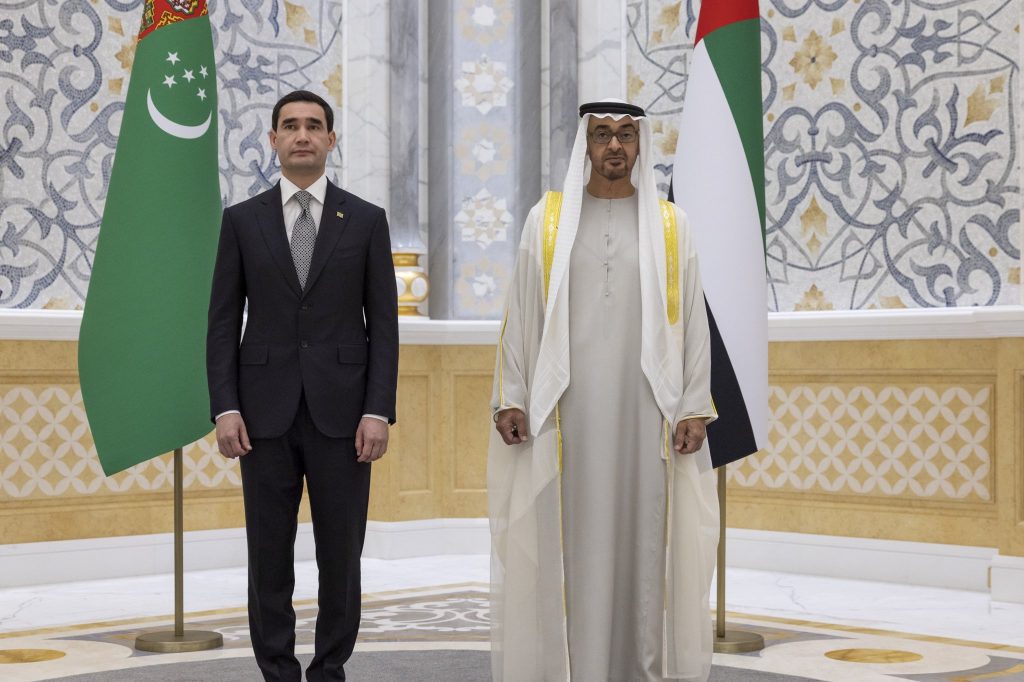 Noting that this is his first visit to the UAE as President of Turkmenistan, the head of state stressed that a wide range of issues of bilateral relations will be discussed at the current meeting and ideas will be shared on bringing them to a new level that satisfies common interests and modern realities.

Turkmenistan and the UAE are also developing a constructive dialogue in the international arena, providing mutual support at the UN and other international organizations. 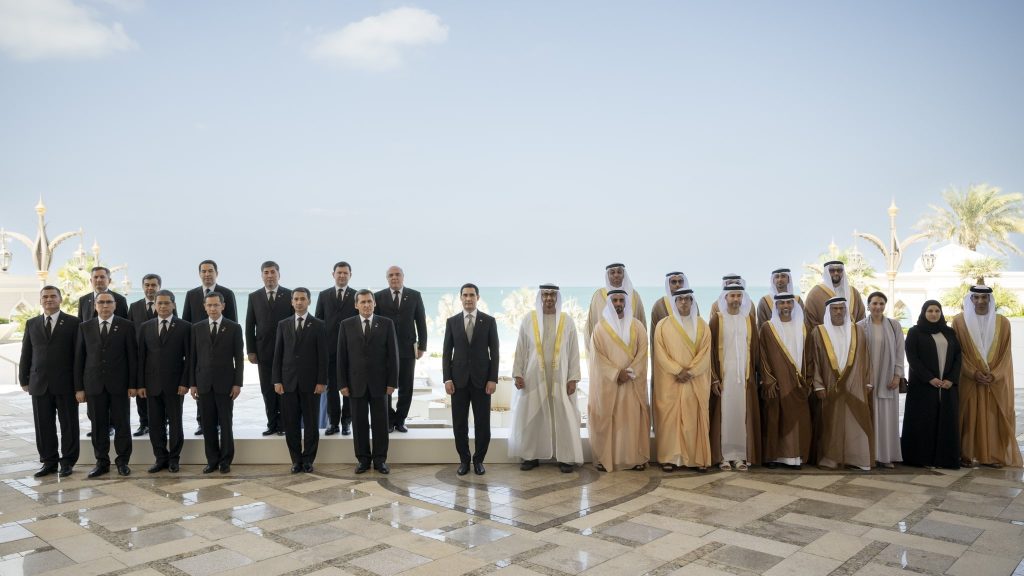 The President of Turkmenistan also stated his readiness to develop cooperation with the Emirati leading energy companies, since Turkmenistan is aimed at developing its gas chemical industry.

The partnership’s strategic vector is the transport and logistics sector, where there are numerous potential for the realization of initiatives on the establishment of joint transport corridors integrating both countries’ port infrastructure.

Touching upon the topic of transport cooperation, President Serdar Berdimuhamedov spoke about the International Port of Turkmenbashi, which has every opportunity to become the largest transport hub on the continent – in the East–West and North–South directions. In this context, the logistics “aggregation” of the International Seaport of Turkmenbashi and the ports of the UAE has great prospects.

Other relevant areas of cooperation include agriculture, communications, processing and chemical industries, and the introduction of advanced technologies.

The creation of smart cities is another promising area of cooperation. Currently, Turkmenistan is building a new administrative center of the Akhal province, which is currently in the final stage. This complex of facilities is unique in its technical and technological parameters and is an example of the innovative concept of a “smart city”. In addition, the implementation of another mega-project – “Ashgabat City” has been launched.

As for the humanitarian direction, the intensification of cooperation in science, education, culture, and sports is intended to become an important factor in bringing peoples closer together, strengthening the ties of friendship between them.

After the talks in an expanded format, in the presence of President of Turkmenistan Serdar Berdimuhamedov and President of the United Arab Emirates Sheikh Mohamed bin Zayed Al Nahyan, a ceremony of signing bilateral documents was held.

The following documents were inked:

Three more documents will be signed today (22 Nov) during the business forum. These are

The Presidents of Turkmenistan and the UAE discussed the implementation of the signed documents, as well as the entire range of bilateral cooperation. 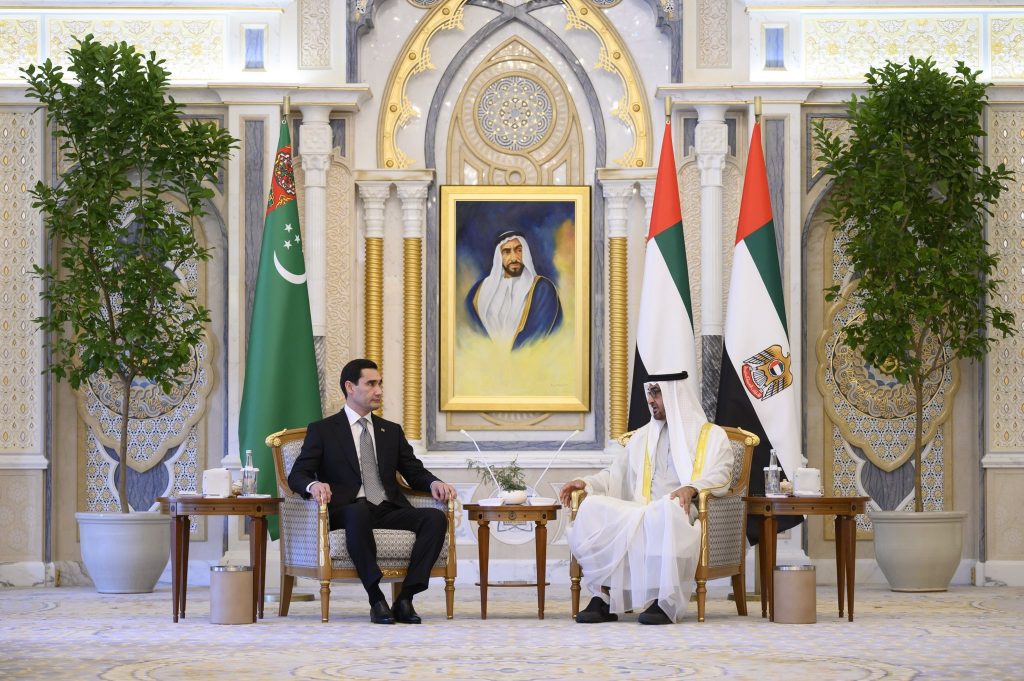 The sides also exchanged views on a number of topical aspects of the regional and global agenda of mutual interest, which, first of all, concerns ensuring universal peace, security and sustainable development.

President Serdar Berdimuhamedov invited Sheikh Mohamed bin Zayed Al Nahyan to pay an official visit to Turkmenistan. This invitation was gratefully accepted. The dates of the visit will be agreed through diplomatic channels.

The head of Turkmenistan met with the Ruler of Dubai 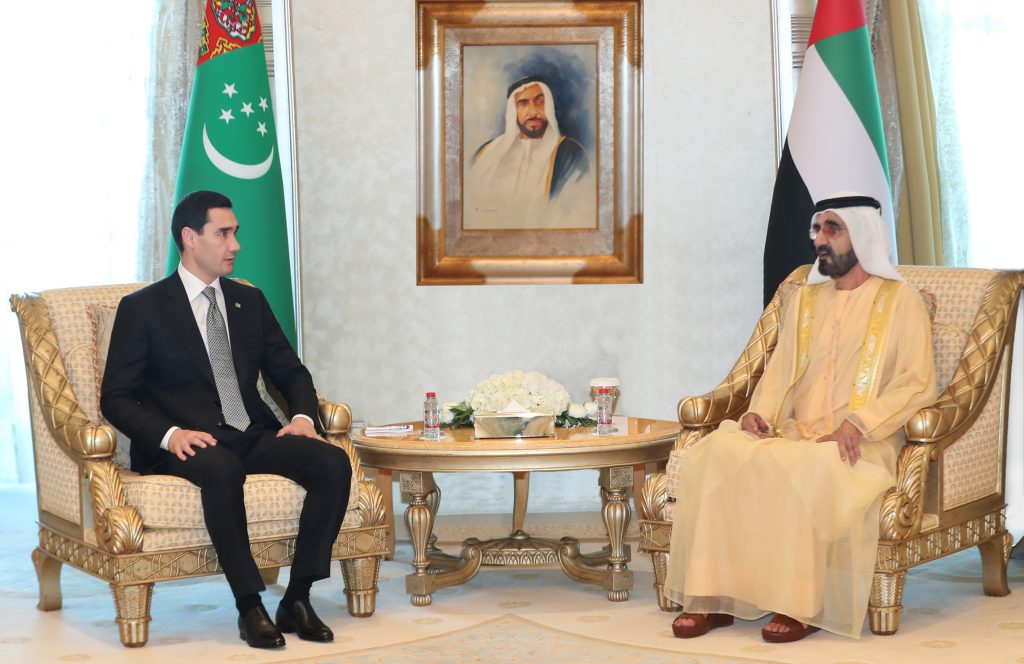 The parties noted that the agreements reached during the summit talks and the solid package of documents signed as a result of them laid a solid foundation for the further development of effective partnership on a long-term basis.

Taking this opportunity, President Serdar Berdimuhamedov invited Sheikh Mohammed bin Rashid Al Maktoum to pay an official visit to Ashgabat at a time convenient for him. This invitation was gratefully accepted.

During the meeting, after discussing the state and ways to expand productive partnership, the sides expressed a common desire to bring traditional cooperation to a qualitatively new level. In particular, emphasis was placed on the planned opening of a specialized store selling Turkmen carpets in Dubai (UAE).

As the President of Turkmenistan noted, another important tool in the development of trade and economic relations between the two countries is the establishment of ties between business circles. In this context, it was emphasized that a business forum on cooperation between the Chamber of Commerce and Industry of Turkmenistan and the UAE Federation of Chambers of Commerce and Industry will be held within the framework of the current visit.

The fuel and energy potential of our countries, their advantageous location at world trade and transport and communication intersections open up opportunities for further expansion of partnership, the head of state said.

Sheikh Mohammed bin Rashid Al Maktoum presented a book about his life and activities to the head of Turkmenistan.

At the end of the meeting, the sides confirmed their mutual readiness to further intensify bilateral cooperation.

Turkmenistan and the UAE may create a joint bank

During the meeting with the President of Turkmenistan, Sheikh Mansour bin Zayed Al Nahyan, Deputy Prime Minister and Minister of the Presidential Court, made a proposal to create a joint Turkmen-Emirati bank and open its representative office in both countries.

President Serdar Berdimuhamedov supported this idea, noting that Turkmenistan will create all opportunities for this. 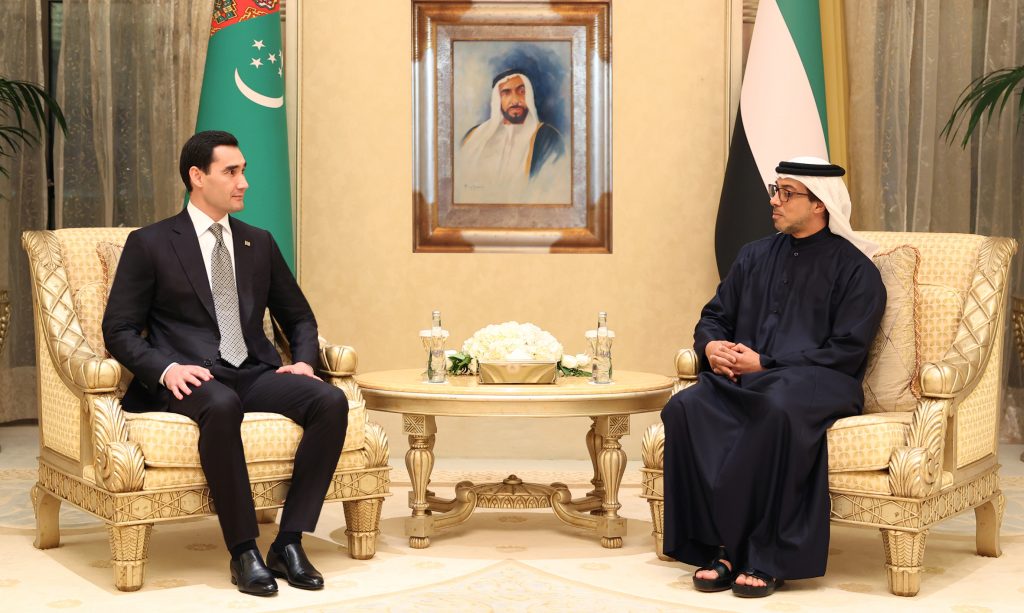 According to Mansour bin Zayed Al Nahyan, the UAE is interested in cooperation with Turkmenistan, which they see as a reliable and promising partner with huge resource and economic potential.

Touching upon the cooperation between the two countries in the investment sphere, the Turkmen leader spoke in favor of intensifying the dialogue with the Abu Dhabi Development Fund in the field of investment and attracting loans for the implementation of projects in the gas chemical industry, transport, logistics and financial fields.

During the meeting, issues of cooperation in a number of promising areas were discussed, including in the fuel and energy sector, as well as in such areas as oil refining, gas chemical industry and transport.

The parties also noted the importance of building up partnership in the transport sector, in particular, in the field of sea, rail and air communications. In this context, the Head of Turkmenistan stressed the urgency of establishing contacts with the International Port of Abu Dhabi in order to join the International Seaport of Turkmenbashi to the system of seaports of the world.

At the end of the meeting, President Serdar Berdimuhamedov invited Sheikh Mansour Bin Zayed Al Nahyan to visit Ashgabat at a convenient time for him.

The visit of the President of Turkmenistan to the UAE continues.

Joint Statement of Turkmenistan and the United Arab Emirates

During the visit, the Presidents of Turkmenistan and the United Arab Emirates exchanged views on expanding bilateral partnership in key areas of the economic, socio-cultural sphere, as well as on the regional and international agenda of mutual interest.

The parties, noting the importance of cooperation in the economic sphere, expressed their desire to strengthen economic cooperation taking into account mutual interests, discussed prospects in this areas, and also announced their intention to increase joint efforts in priority areas such as oil and gas, oil refining, chemical industry and renewable energy.

The parties will provide assistance to businessmen of the two states in the implementation of joint projects in order to strengthen investment partnership.

The sides noted the important role of transport links in enhancing bilateral economic cooperation and in this regard stressed the need for interaction between the international ports of Turkmenistan and the United Arab Emirates.

The leaders, recognizing the role of humanitarian partnership as the most important means of bringing peoples closer, deepening mutual understanding between them, enriching cultures, developing friendly relations, agreed to encourage and deepen cultural exchanges, as well as expand cooperation in tourism, sports, science and education.

The Presidents of Turkmenistan and the United Arab Emirates attach particular importance to enahcing the central role of the United Nations in addressing global issues of international security and sustainable development, conflict prevention. The leaders of the two countries stated that terrorism, transnational crime, narcotic drugs and psychotropic substances are among the main threats to peace and security on the planet and confirmed their readiness to develop cooperation in combating these challenges.

The leaders noted the importance of international cooperation in the interests of peace, security and progress as an approach that promotes cooperation in the fight against extremism in all its manifestations, mutual respect, understanding and tolerance.

In this regard, the leaders emphasized the two countries’ desire to establish and maintain a climate of trust and mutual understanding on a regional and international scale, as well as the importance of peaceful resolution of international issues solely through diplomatic means.

His Excellency President of Turkmenistan Serdar Berdimuhamedov expressed sincere gratitude to His Highness President of the United Arab Emirates Sheikh Mohammed bin Zayed Al Nahyan for the warm welcome and high-level hospitality and invited His Highness to pay an official visit to Turkmenistan. The invitation was accepted with gratitude.  ///nCa, 22 November 2022