You are here: Home / Articles And Reports / President of Turkmenistan launches construction of three new wells at Galkynysh gas field

Today, on August 23, with the participation of President of Turkmenistan Gurbanguly Berdimuhamedov, a solemn ceremony was held to mark the start of construction of new gas wells at the world’s largest gas field Galkynysh in the Iolotan etrap of Mary velayat.

In July 2021, the President of Turkmenistan signed a Resolution, according to which the State Concern Türkmengaz signed a contract with CNPC Chuanqing Drilling Engineering Company Limited (PRC) for the construction and commissioning of three gas wells of particular complexity. 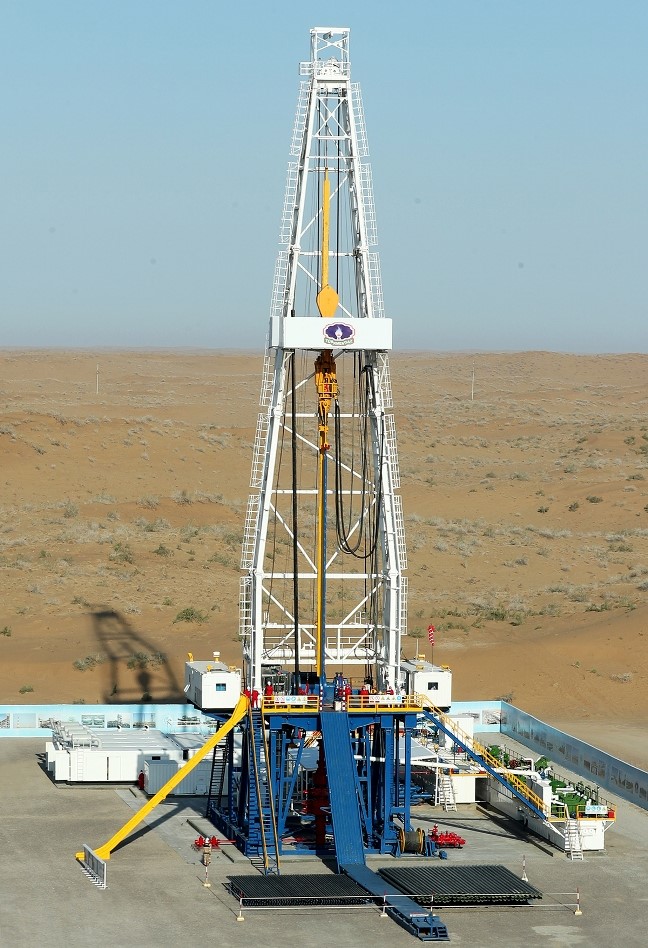 As expected, the flow rate of each of them, on average, will be equal to three million cubic meters of gas per day. The project is designed for 30 months, in accordance with the agreement signed in 2007, and payment for the company’s services will be carried out through the supply of natural gas to the PRC within three years.

Congratulating the ceremony participants on an important event for the country’s gas industry, President Gurbanguly Berdimuhamedov noted the successful development of strategic cooperation between Turkmenistan and the People’s Republic of China.

During the celebrations, the Ambassador Extraordinary and Plenipotentiary of the People’s Republic of China to Turkmenistan Qian Naicheng, as well as Director General of the National Branch of the China National Oil and Gas Corporation Chen Huailu, spoke to the participants of the event.

The ceremony participants watched with great interest a video introducing the high achievements of the oil and gas industry of our country.

Then, by teleconference, the President of Turkmenistan gave ceremonial start to the drilling of the gas wells at the Galkynysh field.

Possessing a huge energy potential, Turkmenistan is consistently forming a multi-vector infrastructure for the export of environmentally friendly fuel to world markets. The tasks of strengthening the raw material base of the industry, industrial development of new deposits, including in the Turkmen sector and the coastal zone of the Caspian Sea, in the Amu Darya basin, in the Central Karakum and other regions of the country, are being successfully solved.

One of the most ambitious projects in this area was the commissioning of the world’s largest gas field Galkynysh, the reserves of which, together with the Yashlar and Garakol fields, are estimated at almost 27 trillion cubic meters.

After the discovery of this gigantic storehouse of hydrocarbons, Turkmenistan confidently takes the fourth place in the world in terms of natural gas reserves.

Intensive prospecting and exploration work here was started by the State Corporation “Türkmengeologiýa” in the 2000s. At the same time, each of the wells, which gave industrial inflows of hydrocarbon raw materials, contained several productive horizons located at different depths.

To accelerate the pace of this work, loans were attracted – $ 8.1 billion, provided by the State Development Bank of China (CDB), in accordance with the Framework Agreement signed between the Government of Turkmenistan and the Government of the PRC. Separate loan agreements, for a period of 7 and 10 years, were concluded between the State Concern “Türkmengaz”, the CDB and the company “PetroChina”. Currently, these borrowed funds have been fully repaid.

As part of the first stage of the industrial development of Galkynysh, carried out by Türkmengaz Group of Companies together with foreign partners, 22 wells were built here, and two gas processing complexes with a total capacity of 30 billion cubic meters of commercial gas per year were erected.

At the moment, there are 45 wells in the operating fund of the field, the area of ​​which is more than 4 thousand square kilometers, the flow rate of each of them, on average, is equal to two million cubic meters of gas per day.

The Galkynysh field is one of the raw material sources of the Turkmenistan-China gas pipeline. Commissioned in December 2009 with the participation of the leaders of Turkmenistan, Uzbekistan, Kazakhstan and China, the pipeline is designed to supply 40 billion cubic meters of Turkmen gas per year, and the total throughput capacity of its three lines (A, B and C) is 55 billion cubic meters.

As a world energy power, Turkmenistan demonstrates a constructive approach to addressing issues of effective implementation of its colossal energy potential. Having established productive contacts with dozens of countries of the world, large foreign companies with solid experience and advanced technologies in various fields, our country has established itself as a responsible and reliable partner. The scale of the tasks being solved today in the oil and gas complex opens up the widest opportunities for broad international cooperation in this area on the basis of real economic benefits. [This part of the report is cross-post from Nebit-Gaz]

Here are some quotes from the speech of the president of Turkmenistan and his subsequent remarks to the speeches of the ambassador of China and the director general of CNPC Turkmenistan:

The total natural gas reserves of Turkmenistan are estimated to be about 50 trillion cubic meters.

During the eleven years of operation of the Turkmenistan-China gas pipeline, more than 300 billion cubic meters of gas has been supplied to China.

The Turkmenistan-China gas pipeline was built in just one year and 8 months. Its length is 7000 km with another 2000 km within the territory of China.

Currently 40 bcm (billion cubic meters) of gas is supplied annually to China through this pipeline. The volume will be raised to 65 bcm and subsequently to 100 bcm.

Excerpts from the speech of Ambassador Qian Naicheng of China:

Today’s start of construction of three wells in the Galkynyş field represents a new step in strengthening interstate cooperation in the energy sector. The Chinese side is ready to further develop productive interaction with the Turkmen side, covering such areas as investment, trade and other areas, as well as a comprehensive partnership in the fuel and energy complex, which meets mutual interests.

This year, Turkmenistan celebrates the 30th anniversary of state independence. Despite the difficult international situation, as a result of the far-sighted policy and wise leadership of its national leader, the country is dynamically developing, its international authority is growing, and the standard of living of the Turkmen people is increasing. As a friendly, fraternal state and partner, China is sincerely happy about these successes, the diplomat emphasized.

The same day the president led the groundbreaking ceremony of a building intended for mass ceremonies with seating capacity for 3000. It is located right next to the giant yurt Türkmeniň ak öýi in Mary. The local construction company Ak täjirçilik merkezi is doing the project.

The president visited the medical and diagnostic centre in Mary and presented 10 fully equipped ambulances to the administration of the hospital. The funding for these ambulances came from the Gurbanguly Berdimuhamedov Charitable Foundation for Assisting Children in Need of Care.

While the president was in Mary, the opening of a seven-storey apartment complex with capacity for 188 families took place. It has been built by the private company Ojar Aziýa.

A carpet factory was opened in the Bayramali district of Mary province. It belongs to the state association Turkmenhaly.