Home » International conference “Turkmenistan and the United Nations: Cooperation for Peace and Trust” coincides with 29th anniversary of Turkmenistan joining the UN

On March 2, 2021, the International Conference “Turkmenistan and the United Nations: Cooperation for Peace and Trust” on the occasion of the 29th anniversary of Turkmenistan’s UN membership, was held in the Ministry of Foreign Affairs of Turkmenistan. 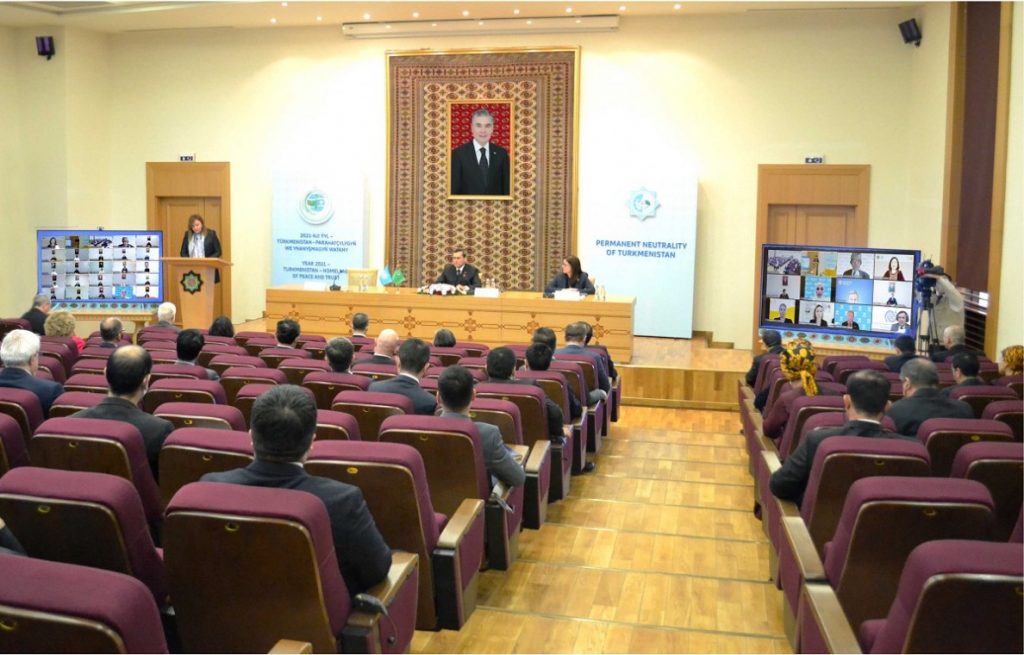 In his speech the Minister of Foreign Affairs of Turkmenistan Rashid Meredov noted that, 29 years ago, on the 2nd of March, 1992, United Nations General Assembly adopted historical Resolution, according to which Turkmenistan became a full-fledged member of the League of Nations. During this period Turkmenistan actively implementing the “policy of open doors”, dynamically develops cooperation with this largest international organization and its specialized agencies for the sake of peace, security and sustainable growth.

The main vectors of interaction between Turkmenistan and the United Nations have strategic character. So, on December 12, 1995, Turkmenistan gained permanent Neutrality, already twice enshrined in relevant Resolutions of the United Nations General Assembly. Based on its neutral status, Turkmenistan has repeatedly come up with initiatives, aimed at ensuring global peace, security and stable growth.

In this context especially significant is the fact that Ashgabat became the headquarters of the Regional Centre for Preventive Diplomacy for Central Asia. The Government of Turkmenistan intends to expand the presence of the UN system in the country. In February of the current year an agreement was reached to open in Ashgabat the representative office of the United Nations Office for Project Services (UNOPS). It is also important to mention that beginning from February 2021 program officer of the UN High Commission for Human Rights started his work in Turkmenistan. 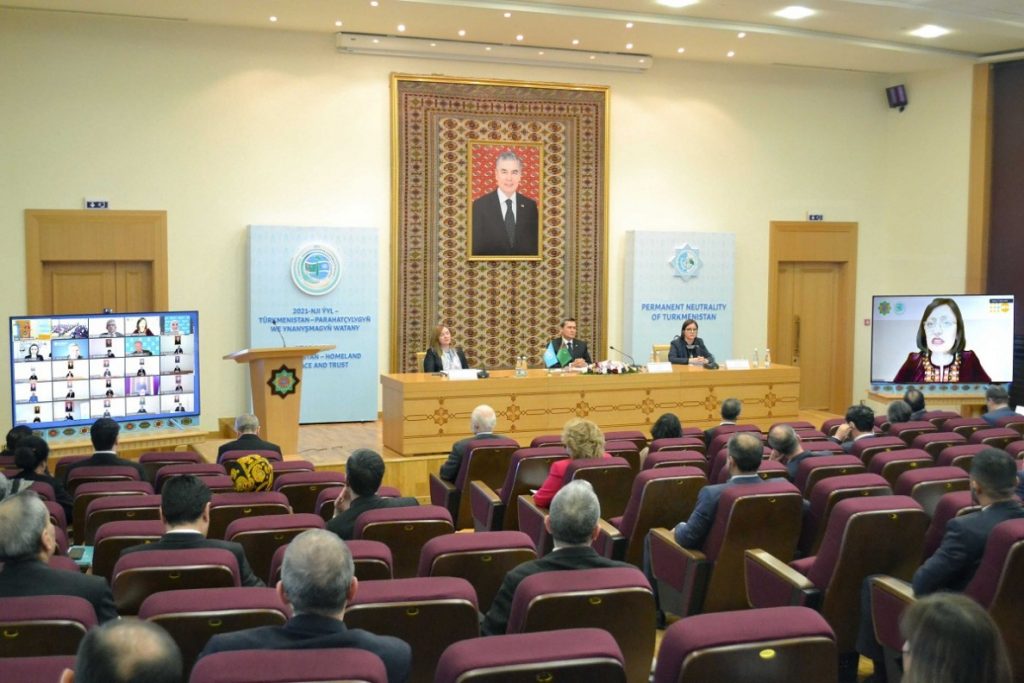 Currently the interaction of Turkmenistan on the UN platform covers various spheres of life of the country. It is due to membership of Turkmenistan in 11 councils, commissions and committees of the UN. The country promotes its candidacies to other structures of the Organization.

With the aim of all-round realization of the Framework Program of cooperation in the sphere of sustainable development between the Government of Turkmenistan the United Nations for the period of 2021-2025, which was adopted on March 14, 2020, Turkmenistan activates effective partnership with the UN Development Program, UN Population Fund (UNFPA), UNESCO, UNICEF, UNHCR, WHO and other structures of the UN system.

The Minister of Foreign Affairs of Turkmenistan also expressed special gratitude to the representation offices of the UN specialized agencies in Ashgabat for their vast contribution into the development of cooperation between Turkmenistan and the whole UN system, including work out and participation in implementation of national plans and programs. 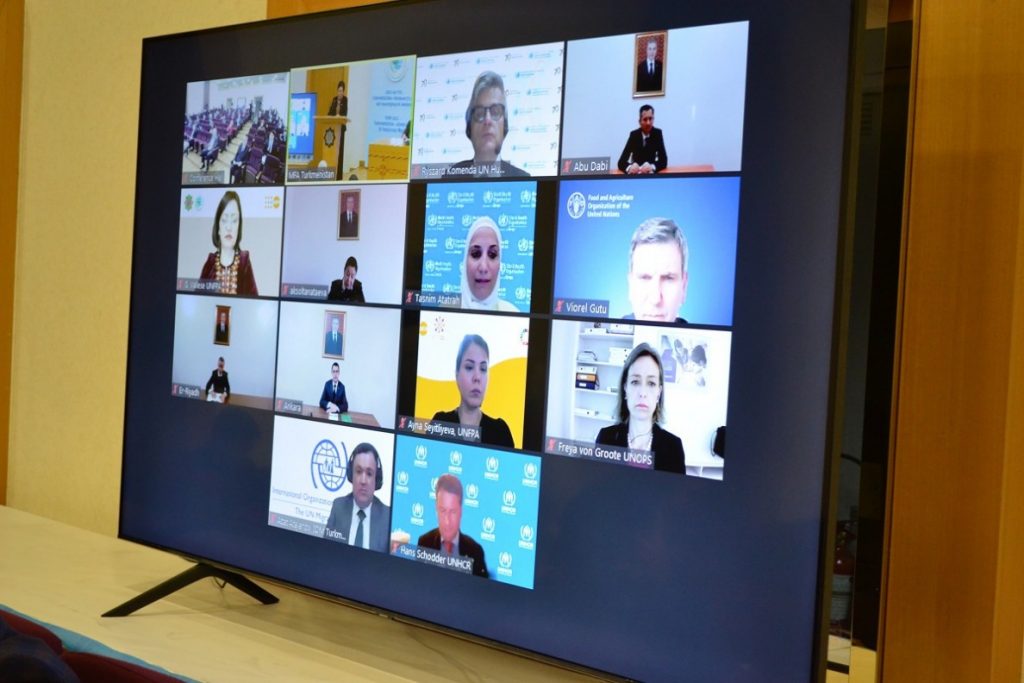 During the speeches the speakers noted commitment of Turkmenistan to the development of international cooperation in the name of peace, stability and sustainable development. Also the efforts of the Leadership of the country for the strengthening of the culture of peace, trust and mutual understanding in the relations among countries and peoples of the world had been stressed.

At the end of the Conference the Address on behalf of the participants of the International Conference “Turkmenistan and the United Nations: Cooperation for Peace and Trust” to the esteemed President of Turkmenistan Gurbanguly Berdimuhamedov had been adopted. /// MFA Turkmenistan, 2 Mar

A number of bilateral documents signed within the framework of international conference “Turkmenistan and the United Nations: Cooperation for Peace and Trust”

Within the framework of the event online ceremony of signing the bilateral documents was held. In particular, the following documents were signed: Agreement between the Government of Turkmenistan and the United Nations Population Fund on Co-Financing, as well as Work Plan between the Ministry of Sport and Youth Policy of Turkmenistan and United Nations Population Fund (UNFPA) within the framework of the project “Strengthening mechanisms of youth participation in the implementation of the national youth policy and advancement of gender equality” for 2021. 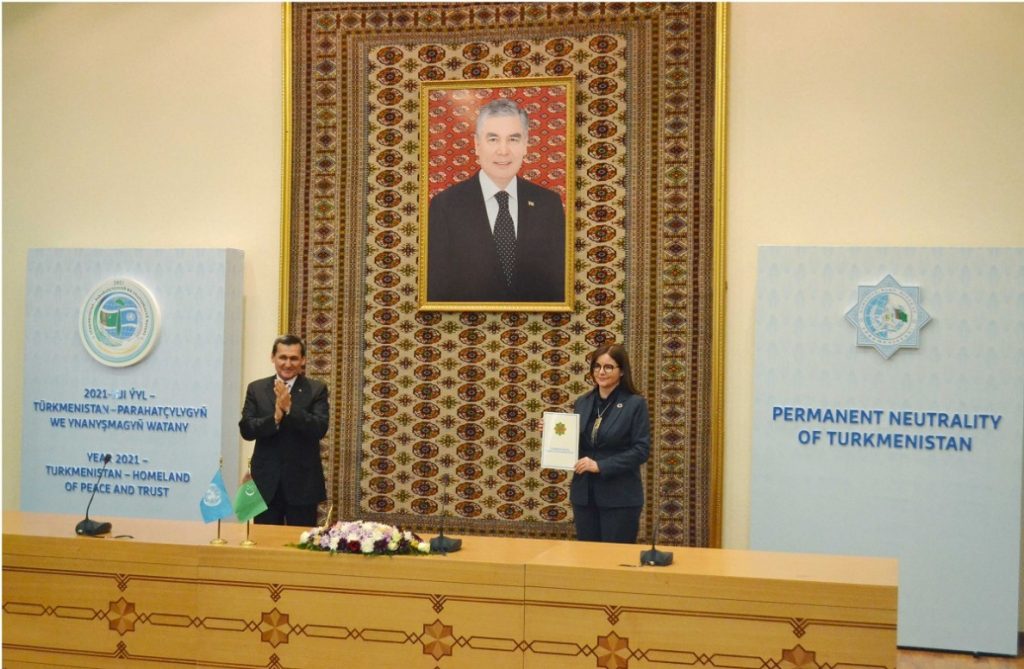 As is known, that Resolution had been signed by the President of Turkmenistan on the 28th of February 2021, according to which, starting from March 2 this year, foreign citizens holding UN passports are allowed to come to Turkmenistan, stay in the country, leave it, and cross the territory of Turkmenistan in transit without visa.

Besides that, the document prescribed those foreign citizens – officers of the UN or its specialized structures, accredited by the Ministry of Foreign Affairs of Turkmenistan, as well as their family members, are exempted from obtaining visa during the period of work in Turkmenistan.

The adoption of this Resolution is in line with the 1946 Convention on the Privileges and Immunities of the United Nations. /// MFA Turkmenistan, 2 Mar

Signing of documents, as reported by UNFPA

The Government of Turkmenistan will co-finance the 2021-2025 Country Programme between Turkmenistan and UNFPA.  The Co-Financing Agreement was signed today by Deputy Chairperson of the Cabinet of Ministers, Minister of Foreign Affairs of Turkmenistan Mr. Rashid Meredov and UNFPA Country Director for Turkmenistan Ms. Giulia Vallese, during the International Conference “Turkmenistan and the United Nations: cooperation for peace and trust”.

“Let me congratulate UNFPA on the signing of the Co-Financing Agreement for the 2021-2025 Country Programme, which opens up new opportunities for expanding our cooperation, which has been already well established,” said Mr. Rashid Meredov.  “Our main partnership roadmap is defined by the approved Country Programme Document. We stay committed to the priorities in the area of gender equality, universal access to reproductive health services, youth and data.”

“The Government co-financing of its programmes is a testimony of  Turkmenistan’s ownership and commitment to ensure the sustainability of its policies, development programmes and actions in the areas of reproductive health, gender equality, youth and population and development,” said Ms. Vallese.

“The acceleration in progress needed to achieve the 2030 Development Agenda, the International Conference on Population and Development and the commitments made by the Government during the Nairobi Summit at the end of 2019 will only happen with filling the required resources and stepping-up political commitment,” she added.

The new UNFPA Country Programme builds on the achieved results and aims to support the Government in providing expert support and policy advice to empower women, adolescents and youth enabled by population dynamics, human rights and gender equality, and creating conditions for the population to contribute to the development of the country.

The Country Programme will contribute to the achievement of the UNFPA transformative results: (a) ending unmet need for family planning; and (b) ending gender-based violence. It will also contribute to further ending preventable maternal deaths.

Nearly 30 years of partnership between UNFPA and the Government has expanded strategically with the Government now acting as the major funding partner.  More than $800,000 have already been committed by the Government for the first year of the Country Programme within the framework of the signed Work Plans for 2021 in support to crucial reproductive health and family planning programmes, as well as in support to the Population and Housing Census 2022.

Under the Co-financing Agreement, UNFPA with the Government will continue enabling a policy environment to ensure high quality, inclusive and affordable reproductive health services with increased investments in family planning to reach the furthest behind and strengthen accountability mechanisms for health governance.

As the leading UN agency on Census, UNFPA will also be the key government partner on Population and Housing Census 2022. UNFPA will support to ensure access and generation of quality population data to incorporate population and development analysis into planning and policy decisions to achieve SDGs.

Within the framework of the International Conference, UNFPA also signed the annual work plan for 2021 with the Ministry of Sport and Youth Policy of Turkmenistan.

Realizing the full potential of young people, including the adolescents, is a crosscutting priority of UNFPA’s work in Turkmenistan.  UNFPA continues to lead the UN Joint Task Force on Youth Policy and will expand partnership with the government Working Group on Youth Policy in the implementation and monitoring of the State Programme on Youth Policy.  UNFPA will also work with the partners in promoting the innovative mechanisms and platforms for youth and adolescents participation in decision-making and youth-adult dialogue, including through the digital-based initiatives.

UNFPA stands ready to continue enhancing its partnership with the Government, staying relevant, providing policy advice, technical expertise and support to empower women and girls, and young people in the country. /// UNFPA Turkmenistan