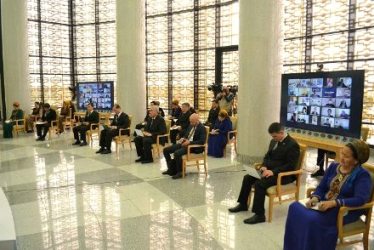 On March 24, 2021, a press-conference titled “Significance of peace and trust in modern world” was held in the Ministry of Foreign Affairs of Turkmenistan in a hybrid format. The event was dedicated to the 30th anniversary of Turkmenistan’s Independence, to the 25th anniversary of the permanent Neutrality of the country as well as to the announcement of the year 2021 as the Year of Peace and Trust.

The speakers from Turkmenistan and foreign countries set out their vision of the notions peace and trust, which today are very important as never before. They highlighted the role of mass media in promotion of these values on national, regional and international levels.

The participants of the press-conference highlighted timeliness of the proclamation by the UN General Assembly the year of 2021 as the International Year of Peace and Trust. In this context the participants expressed the success and efficiency of the foreign and domestic policy of Turkmenistan conducted under the wise leadership of President Gurbanguly Berdimuhamedov during independence years.

At the press-conference the speakers picked up Turkmenistan’s success during independent years in political, economic and cultural-humanitarian fields. It was underlined the important position of Turkmenistan in the sphere of promotion of peaceful and trustful relations in the region and beyond.

The participants expressed to the Turkmen side their gratitude for the organization of this event. Representatives of International media confirmed their interest to work in close contacts with Turkmen colleagues for further strengthening of bonds of friendship and mutual understanding among the countries and peoples. 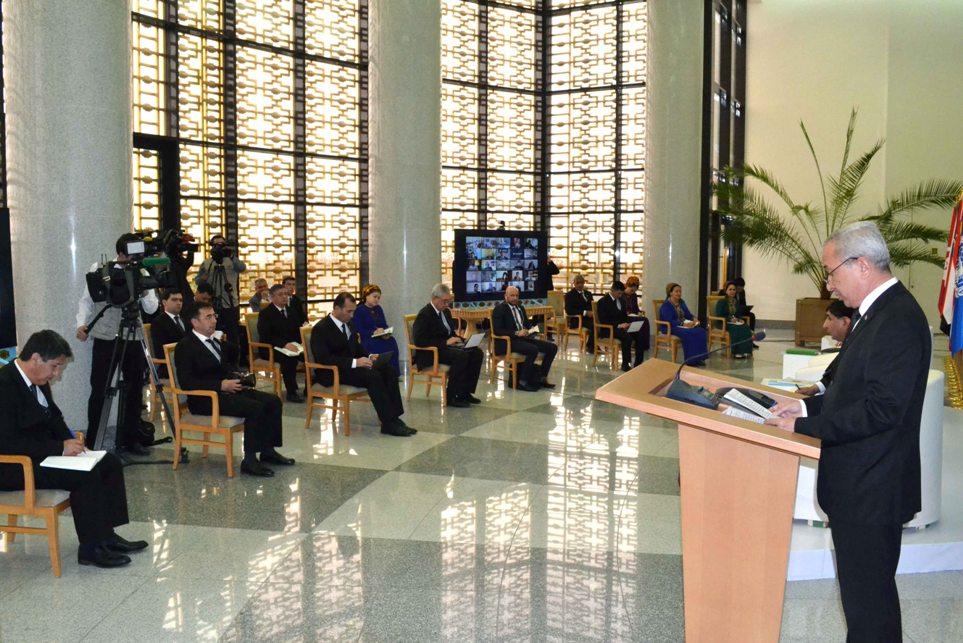 During today’s press-conference titled “Significance of peace and trust in modern world”, which was held in the MFA of Turkmenistan with the participation of the heads of the authoritative foreign broadcasting organizations, it was highlighted the timeliness of Turkmenistan’s initiative, as well as the Resolution of the UN General Assembly on proclamation of the year of 2021 as the International Year of Peace and Trust.

The Deputy Chairman of Interstate TV and Radio Broadcasting Company “Mir” B.Kozorezov during his speech stated that international initiatives and undertakings of Turkmenistan are fully targeted to promote global peace and mutual understanding.

Speaking at the press-conference, Programs Director of Turkish TV and Radio Broadcasting Company “TRT World” B.Bayraktar said that the country during the years of its independence achieved huge success in all spheres of national economy, which is confirmed by the development of the infrastructure and industry with high pace.

Director General of the Russian International Network of Information TV Channels “Russia Today” A.Nikolov stated that international initiatives of neutral Turkmenistan aimed at peaceful and trusting coexistence of the countries and peoples of the world, are in tune with the Goals of the Global Agenda.

In his video address, Javad Mottaghi, Secretary General of the Asian-Pacific Broadcasting Union (ABU) underlined the significance of the peacefulness and conflict-free interstate and interpersonal contacts in international relations.

Deputy Direcor of the Directorate of international relations of the Federal State Unitary Enterprise “All-Russian State Television and Radio Broadcasting Company” A.Perevoshchikov stated that Turkmenistan, being the neutral state invariably acts for the strengthening of peace and security on regional as well as on world scale, thereby actually proving the efficiency of the institution of the permanent neutrality.

Within the frame of his statement Chief Executive Officer of Prasar Bharati Broadcasting Corporation of India Shri Shashi Shekhar Vempati underlined that today the notions of peace and trust are important as never before. In this regard the work of media plays considerable role. By means of close cooperation we can convey to the listener the objective information and facilitate the friendly dialogue between the countries and peoples.

During the speech of the Chairman of National Television and Radio Broadcasting Company of Uzbekistan A.Hadjaev, he stated that this event confirms once again aspirations of Turkmenistan to further strengthen peace, stability and security in the region. In this context, the mass media plays important role in building confidence in the society, which is the driving force of the development.

Besides that, in their presentations the Director of Georgian TV channel “TV-24” B.Nachkebia, Director of the international radio programmes of “AZTV” F.Iskenderov, as well as the representatives of the State Information Agency of Azerbaijan “AZERTADJ” S,Ibragimov and Armenia’s Information Agency “ARMENPRESS” A.Djanpoladyan, it was underlined the significance and timeliness of the proclamation by the League of Nations of the “International Year of Peace and Trust”. They expressed especial need of strengthening trust and mutual understanding in international relations for full realization of Sustainable Development Goals and provision of peaceful coexistence of the states and peoples of the world.

The Chairman of the State Information Agency of Turkmenistan M.Gazakbaev, the Deputy Chairman of the State Committee for Television, Radiobroadcasting and Cinematography of Turkmenistan A.Kakaev and Editor-in-chief of the newspaper “Turkmen Dunyasi” B.Muradov also underlined the significance of proclamation by the UN General Assembly of 2021 as the International Year of Peace and Trust. Initiatives of the Leadership of the country are aimed at promotion of global peace, mutual understanding and solidarity, as well as preservation of unity and harmony in the world.

As is known, during Independence years the domestic and foreign policy of Turkmenistan was being developed in accordance with the principles of neutrality, aimed at strengthening of bonds of friendship and peace among the countries and peoples.