You are here: Home / Articles And Reports / Rumi commemorated on his 747th death anniversary at Seb-i Arus ceremonies in Konya

On December 7 and December 17 to commemorate Jalāl ad-Dīn Muhammad Rūmī on his 747th death anniversary Seb-i Arus Ceremonies were held in Konya, one of the major cities of Turkey.

Every year since 1937, Jalāl ad-Dīn Muhammad Rūmī is being commemorated on his death anniversary at Seb-i Arus (Night of Reunion with the Divine) commemoration ceremonies in Konya, the birthplace of the Mevlevi order in the 13th century and home to Rumi’s tomb.  Konya is a city known not only for Mevlâna, but also for its rich culture that blends significant historical heritage.

2020 marked the 747th death anniversary of the world-renowned Sufi mystic, poet, and scholar Jalāl ad-Dīn Muhammad Rūmī known to the world as Rumi. This year on December 7 and December 17, with the support of the T.R. Ministry of Culture and Tourism and Turkish Tourism Promotion and Development Agency, Sema ceremonies as part of Seb-i Arus ceremonies were held at Rumi Cultural Center, in Konya. Due to the pandemic and no participation, the ceremonies were livestreamed on GoTurkey’s Twitter and Facebook accounts and real time stories will be shared from GoTurkey’s Instagram account. (www.goturkey.com)

With the participation of Speaker of the Turkish Grand National Assembly Prof. Dr. Mustafa Şentop and Turkish Minister of Culture and Tourism Mehmet Nuri Ersoy to the celebrations, Vice President of International Mevlâna (Rūmī) Foundation Esin Çelebi Bayru who is also Rumi’s 22nd generation granddaughter and sociologist, writer and Rumi expert Ali Bektaş got together with journalists coming from all around the world. 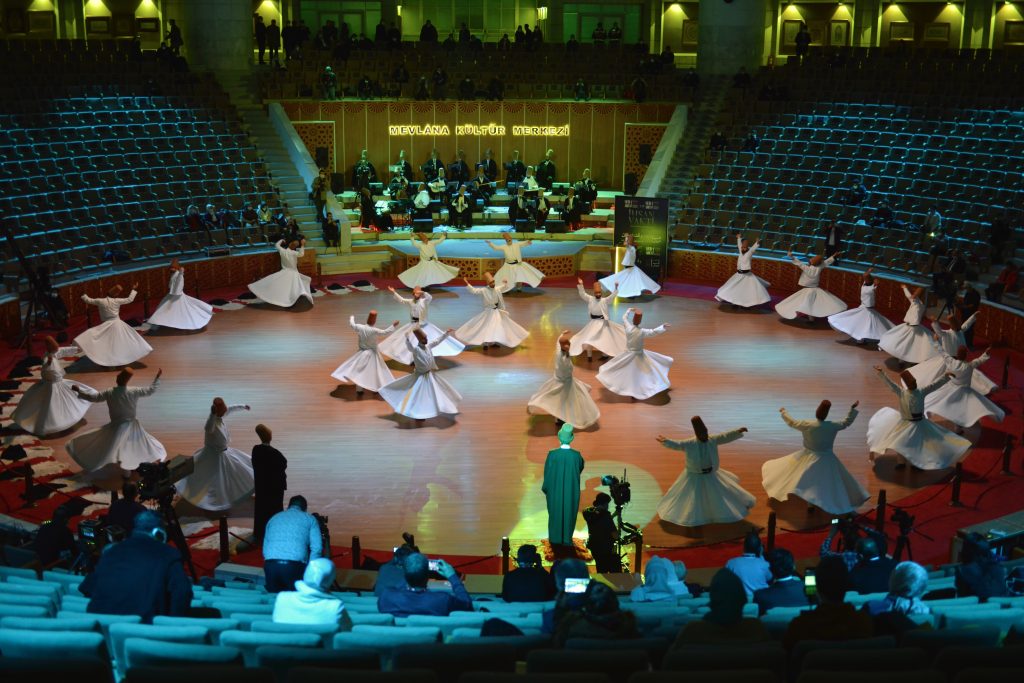 Seb-i Arus ceremonies, which are held every year on December 17, means ‘wedding night’ in Turkish. The wedding night is known in the Mevlevi order as the night Jalāl ad-Dīn Muhammad Rūmī died. Since Jalāl ad-Dīn Muhammad Rūmī considered his death not as an end but as a reunion with his beloved God, his death anniversary is called the ‘Wedding Night’ also referred as ‘The Night of Reunion’. Rumi interprets death as a return to one’s origin, a “return to Allah” due to the fact that its source is a divine ore; according to him death is not the disappearance of the body, but the flight towards Allah. Rumi expresses his philosophy about death with these words: “Everyone refers to it as departing, I, however, refer to it as a reunion.”

The sema ceremony, performed at ceremonies where Rumi is commemorated, contains important symbols reflecting the basic philosophy of Mevlevi Order. Sema generally expresses the formation of the universe, the resurrection of man in the world, the man acting with his love for God and his journey towards becoming the perfect human being. Sema ceremony represents a mystical journey of a man’s spiritual ascent through mind and love to perfection.  The symbolic costumes of whirling dervishes (semazens) performing the sema ceremony are also significant. While the conical felt hats (sikke) represent the ego’s tombstone, the white long skirts represent the ego’s shroud. Over the robes, the whirling dervishes wear long dark cloaks (hırka), which represent their worldly tombs.

At the beginning of the performance, the semazens open both arms to their sides as if they are embracing the universe and start whirling counterclockwise. The right hand, palm upwards directed to the sky, represents being ready to receive God’s benevolence. The left-hand palm looking downwards toward the earth, represent the willingness of the semazens to convey God’s message to those who are witnessing the Sema and the others. During the whirl, the semazens remove their dark cloaks representing being reborn to the truth symbolically, and by crossing their arms across their chests, they represent the number “one”. Thus, semazens bear witness to the belief that “there is but one God”.

The Sufi who embraces all of humanity 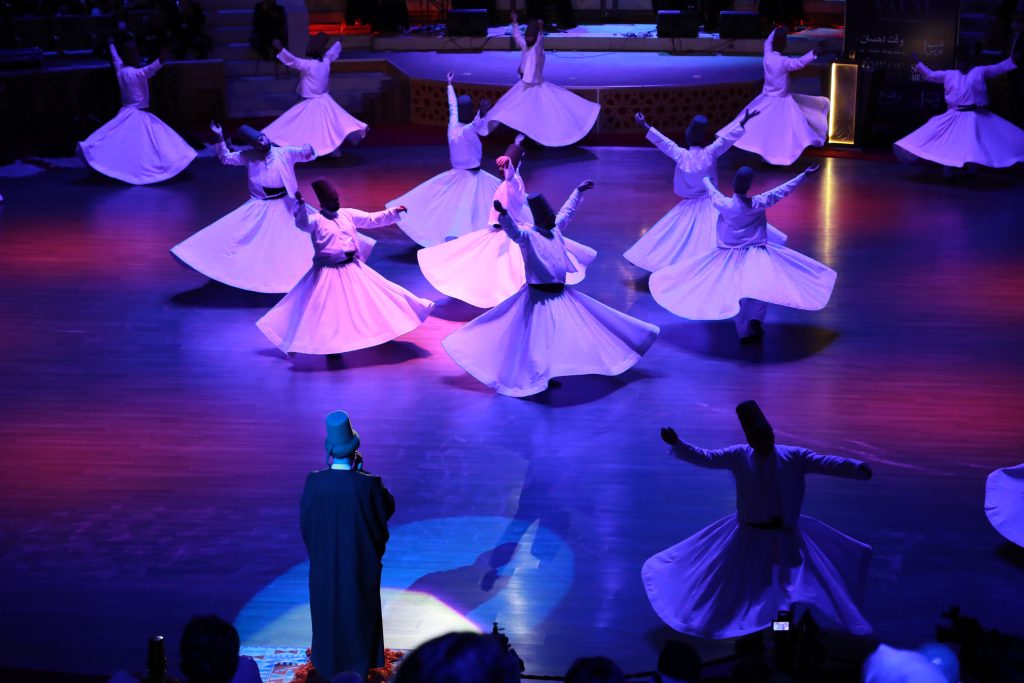 Rumi, the 13th century Sufi poet, known for his famous quote “Come, come whoever you are”, is considered one of the world’s greatest Sufi philosophers. He was loved and respected by all religions for his poems and religious writings that embrace all humanity. Rumi had many attributes such as a Muslim poet, jurist, Islamic scholar, theologian, and Sufi mystic, but he was much more than that. He represents a life order in itself as he believed in the “true essence”. He said the rest was nothing but an image.

Rumi, whose door was open to everyone, no matter what race or religion, has become a symbol of equality in the world in every sense. Every year, visitors from all over the world who believe in Rumi’s philosophy participate in the ceremonies held in Konya to commemorate and celebrate Jalāl ad-Dīn Muhammad Rūmī, who spread this loving, humanistic view to all of humanity.