Ashgabat, 17 July 2017 (nCa) — The Turkish embassy in Ashgabat arranged hosted an event on Saturday (15 July 2017) to mark the first anniversary of the failed coup attempt – it is called the Great Victory of Democracy. 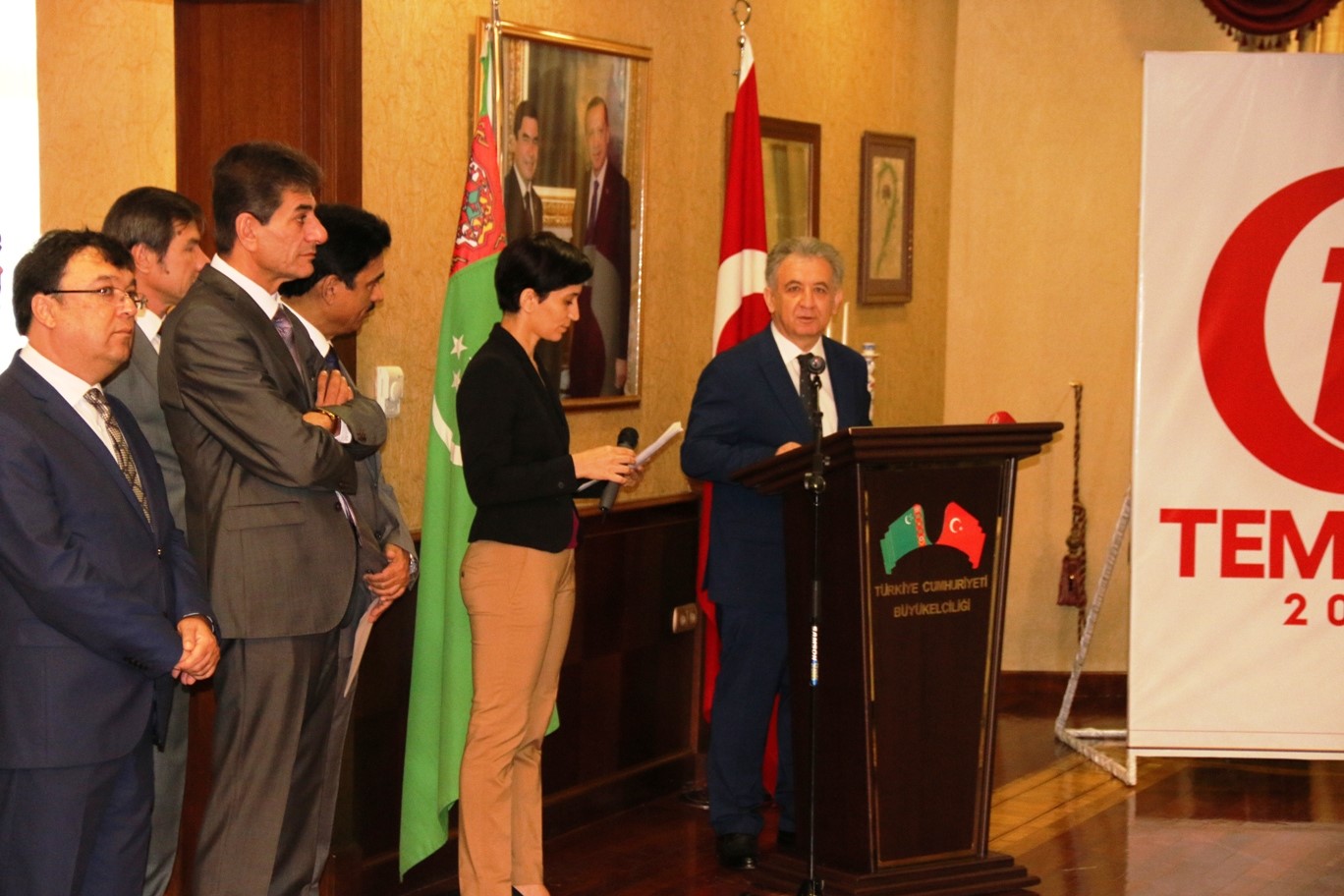 Because of its importance, the speech of Ambassador Mustafa Kapucu is quoted here in full:

Dear Guests, Today, we gather here to remember the coup attempt that Turkey faced a year ago and to commemorate 250 Turkish citizens who lost their lives in thwarting the coup attempt.

In order to understand who fought on the streets to defend democracy on that night, I would like to underline that the youngest of those citizens, remembered as democracy martyrs, was 15 years old and the oldest of them was 82.

We see this structure that has organized in over 160 countries and perpetrated such a bloody act as an international terrorist organization like DEASH and Al-Nusra. It constitutes a serious threat to the countries where they operate.

In this vein, I would like to emphasize that the international dimension of the fight against this terrorist organization is of utmost importance.

We extend once again our sincere thanks to, first and foremost, His Excellency Gurbanguly Berdimuhamedov, the President of Turkmenistan, the Ministry of Foreign Affairs and the Government of Turkmenistan for their solidarity, support and cooperation in this period. Favorably, Turkmenistan stands apart from many friendly countries and allies with its rapid reaction and the statement of support on the night of coup attempt.

Distinguished guests, We have just watched a short video of what happened on that night. In fact, the chain of events started on 15th July at 9.30 pm and lasted until noon on 16 July.

People from the all corners of Turkey took to the streets and resisted the tanks, armored vehicles, F-16 jets and helicopters that bombarded the parliament building, the Presidential Compound and police headquarters. Tanks opened fired on civilians.

The citizens representing the all sections of Turkish nation and the martyrs who lost their lives for this cause may have put up the most important democracy fight ever seen in the world.

We wish Allah’s mercy upon those who lost their lives.

Dear guests, In brief, this attack has shown that

– Turkish people’s courage and determination are hereafter the most important weapons against such possible threats.

– All the political parties united at the Parliament on that night and issued a joint declaration. Thus, it shows that different political ideologies of Turkish politics come together on the least common denominator when it comes to the national interest.

– The media, especially TVs played a very significant role in foiling the coup attempt. It is the consequence of pluralist culture, established in Turkey.

– The judiciary launched a legal investigation against the coup attempt on the same night and emphasized the illegality of the attempt.

– Majority of the Turkish army, apart from terrorist ones, joined the fight and compelled the putschists to surrender.

These are the values that will prevent Turkey to face such attacks in the future.

As a result of administrative, criminal and legal inquires launched right after the coup attempt, comprehensive findings have been obtained. It has become clear that we are faced with a global enterprise, with global aspirations of power and dominance and a perverted entity who does not hesitate to commit crimes. Currently, legal process has been initiated against around 170 thousand people, around 50 thousand people have been arrested, approximately 45 thousand people have been released and the rest has been freed on condition of judicial control. The measures that have been taken so far collapsed the backbone of the terrorist organization.

One year after the coup attempt we can say at this point, regarding the fight against FETO that

– It has become definite in legal terms who was behind the coup attempt, which we know from the first night.

– Many concrete evidences have been obtained such as the testimonies of the putschists, whatsapp messages, the footages of the coup attempt night and the coup plans of the terrorist member who had gone to US on 11 July to get Fetullah Gülen, the ringleader of the terrorist organization, to approve the coup plans, returned back to Turkey on 13 July, and was captured on 15 July nearby Akıncılar Air Force Base in Ankara, which was used as the headquarter of the coup attempt.

– The encrypted communication program of the terrorist organization, Bylock, used by around 150 thousand people was decoded.

Dear guests, After overcoming the 15th July attack, Turkey is on one hand fighting against this terrorist organization and on the other hand tries to turn back to normal daily life and minimize the adverse economic effects of the coup attempt.

Turkish economy has been displaying a successful performance with regard to its macroeconomic indicators despite the global economic recession. In view of growth rates, Turkey has grown by 6, 1% in 2015.

In 2016,  in spite of the failed coup attempt, shrinking global trade, declining global investment desire and the decrease in our tourism income, Turkey experienced a growth rate of 2,9%, which is much higher than the average growth of the Euro zone (1,7%) and the EU (1,9%).

In the first quarter of 2017, Turkish economy has maintained its pace and achieved a growth of over 5%.

Distinguished guests, We will continue to exert maximum efforts toward conducting this tough process in respect of rule of law and democracy and fighting FETÖ through democracy.

Before I end my speech, I would like to commemorate once again our martyrs who lost their lives on 15th July night and express our gratitude to our veterans.