Home » Europe Should Finally Wake Up From Its Long Sleep 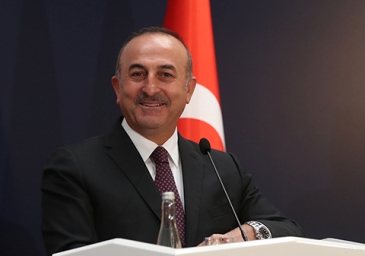 As Turkey, we are conducting a major fight at Europe’s doorstep. The Syrian crisis – which has been raging for nine years and has constantly brought new disasters for humanity – threatens us all once more. But this time, something is different. It is no longer possible for us to defend Europe, in spite of Europe itself, and all alone. Millions of people have been displaced in Syria and are on their way to our borders. The Middle East is in your immediate vicinity as well – it is not as far away as you might think. What happens there inevitably affects you too. There are those who think they have the right to constantly criticise Turkey, although it is an actor that bears the burden alone. Now is the time for them to understand that they need to strive for a solution. Because Syria is a test for all humanity – and for Europe as well.

As you read these lines, an EU country, Greece, is suspending its obligations under international law and EU law and carrying out inhumane acts against asylum seekers – shooting at those seeking refuge at its border on land and in the sea. It sinks their boats, attacks them with tear gas bombs, and has already killed three people and injured many more. It has vetoed a diplomatic statement referring to international law. While the EU’s common values are being trampled underfoot, the EU institutions are supporting Greece – even though they should uphold these values. The UN, however, says that these acts are illegal.

Greece is trying to close off the Aegean and the Mediterranean, to cut off Turkey’s access from those seas. On the other hand, the mechanism called the European Union, in its narrow-minded logic, is generating supporting explanations for these policies.

The problem is not just about one of our neighbours, who suddenly changed overnight its thesis from the cradle of democracy into a nest of horrible images.

The problem is more general. Saying that no asylum-seekers should come to their country and Turkey should look after them is irresponsible, and we will not accept this any longer. However, in any case, Turkey is once again the driving force behind all efforts to find solutions on the field and at the negotiating table. Criticising, instead of cooperating and displaying solidarity, will not solve the problem. On the contrary, it renders efforts in this respect more difficult. Let’s remember together how we got up to this point, what we have experienced in recent months and what we are still experiencing nowadays.

When demonstrations began as a result of legitimate demands from the Syrian people, the Assad regime rolled its tanks against its people, instead of standing by them. To date, at least half a million people have lost their lives and nearly ten million have been displaced.  Cities have been destroyed; people are worn down. 3.6 million of the asylum seekers -meaning two-thirds of all Syrian asylum seekers in the world- have come to Turkey.

Among many terrorist organisations, including PKK/YPG, that have taken up residence in Syria, the only one that the international community has fought against jointly was DAESH. Even so, the real turning point in the fight against DAESH was Turkey’s military operation “Euphrates Shield”, launched in 2016. DAESH was wiped out from a large area. And after that, it could not recover itself anymore. Since 2014, the Assad regime, with the support of Russia and Iran, has started a total, destructive offensive against the opposition, ignoring civilians. Even if we had differences of opinion with them, Turkey tried to contribute to the search for a solution with Russia and Iran, rather than seeking a solution with actors who had no effect on the field or at the negotiating table. It was also necessary to revitalise and save the UN process, protect the lives of thousands of people and prevent them from becoming refugees. With the formula of “Astana Mechanism”, ways to protect people against the mass destruction strategy of the Assad regime were developed. And finally, such a mechanism was established in Idlib. There are also radical elements there, and Turkey has taken the initiative to separate moderates from the radicals. During that, on the pretext of fighting terrorism, the Assad regime attacked, without making any distinction, the civilian population and most recently, Turkish soldiers who were deployed as observers of the ceasefire. Now, the regime has seen what it means to attack Turkish soldiers and it will continue to do so.

When all this was happening and especially in the phase after 2014 -during which the Assad regime focused on the strategy to destroy its own cities and citizens with outside support- the influx of people escaping from Syria to other countries accelerated. All neighbouring countries became overcrowded with them. Turkey has become the country with the most asylum-seekers in the world. In 2015, chaos broke out in Europe when asylum-seekers turned towards Europe, leaving Turkey. On 18 March 2016, we reached an agreement with the EU. This agreement left the burden of the asylum-seekers mainly to Turkey yet again. Nevertheless, we welcomed the fact that the EU was prepared, albeit only partially, to share the burden. Mutual commitments were made and in the last four years, Turkey has fulfilled all its obligations under the 18 March Agreement. The EU, on the other hand, has still not kept its promise on the following chapters:

-A contribution of six billion euros was to be made, however only half of it has been delivered. And that contribution did not reach us or the asylum-seekers directly, but was passed on to various humanitarian aid agencies. That amount is not even worth mentioning, bearing in mind that we spent at least forty billion US Dollars from our own resources in that respect; however even this amount of six billion has not been delivered.

-A Voluntary Humanitarian Admission Scheme has not been launched.

-We were not supported in Implementing our proposal for the establishment of a secure zone in Syria.

In addition, their commitments regarding the upgrading of the Customs Union, Visa Liberalisation, revitalisation of the Accession negotiations, holding of Turkey-EU summits and cooperation in the fight against terrorism have also not been fulfilled.

We have said that “order in Idlib must be maintained, so that the population of four million people can be protected against a criminal regime and the outbreak of a flow of asylum-seekers can be prevented”. Unfortunately, voices supporting us were, once again, very weak. As a result, Idlib once again left its mark in human history with blood – turning into a tragedy in 2020. The area has been razed to the ground by aircrafts of the regime’s supporters. Since December 2019 alone, almost two thousand  civilians have lost their lives and at least one and a half million – 80% of them being  women and children – have been moving towards the Turkish border. We can no longer shoulder this burden alone. It should not be forgotten that almost four hundred million US Dollars is needed for the next six months alone to provide support to the people displaced from Idlib.

The attacks of the tyrannical Assad regime have not been limited to their own people. Most recently, in an airstrike by the Assad regime on our soldiers, who were protecting the de-escalation zone, thirty-six Turkish soldiers became martyrs.

I want to underline this once again: our country can no longer shoulder this heavy burden that it has assumed alone. It is indecent to regard this statement as a threat, blackmail or political manoeuvre. We are continuing to provide the necessary protection and support to approximately four million people in our country. We adhere to the principle of non-refoulement. There is no change in our refugee policy. On the other hand, we have no obligation to stop the asylum-seekers wishing to move on to safe countries. We will not stop asylum-seekers who prefer to leave our country and go to safe countries by their own free will. Actually, we do not have the right to do so either. However, according to international law and the EU law, the countries they are going to must accept them. Just as we have done so.

Nevertheless, there are still millions of people left in Turkey. For these desperate people to be able to return to Syria, Europe should wake up from its long sleep. We should, in cooperation with the UN, create conditions for their voluntary, regular, safe and dignified return. In addition, the EU should not generate irresponsibility, but responsibility. It also should cooperate, above all, with Turkey.

The main problem of our age is displaced persons. The most sensible thing to do is to solve this problem at its source. As regards Syria, our solution is as follows: together, we must prevent Assad’s military solution and revive the political process. We must work together to ensure that Syrians can return to and settle in the areas freed from terrorists by Turkey. Furthermore, without distinguishing between terrorist organisations, we must together strengthen our fight against terrorism. We must also work towards an order in the Middle East, based on territorial integrity and universal norms.

I hope that the German people, who have taken in many more asylum-seekers than any other European countries, will be aware of the choices that lie ahead, and will no longer listen to those wanting to foment hostility against Turkey. In this context, one of the EU leaders who understood us best has been  Chancellor Merkel. However, even the promised twenty-five million Euros – a symbolic amount in aid for the construction of building blocks to accommodate refugees – could not be transferred to us due to bureaucratic reasons. Basically, for the vast and challenging environment in which Europe finds itself, the best strategy is cooperation with Turkey and mutual respect. Turkey is a member of NATO and a candidate country to the EU. The problems of Europe or its vicinity will not be solved in one day. However, without Turkey’s help, they cannot be solved at all. This is clear as crystal and it is up to you to understand it or not. /// nCa, 9 March 2020