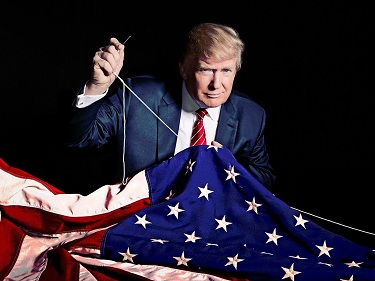 Central Asia is simultaneously blessed and cursed by its geography.

Except for the soviet period, Central Asia has traditionally seen endless streams of people and cargo moving in all directions. The transit potential has been a dependable source of its prosperity. The region is at the heart of the Eurasian landmass. — The location is central, and it is a blessing.

The United States, under the illusion that it is still a superpower, has created many stress points in countries surrounding Central Asia. They have started things that they don’t know how to stop. The feeble mindset that enticed them to start ill-planned adventures is also the mindset that encouraged them to come up with ‘Central Asia Strategy,’ a thinly veiled scheme to commandeer the region. — The location is central, and it is a curse.

There is admirable continuity in the policies of the United States.

They keep doing the same thing with the hope of getting different results. This is one of the definitions of madness.

For instance, they smashed Iraq under the pretext of weapons of mass destruction, then they disbanded the Iraqi army which was the largest group of well trained fighters in the Middle East, then they encouraged Kurds for autonomy thereby alienating them from the rest of the population, and then they sowed discord between Shias and Sunnis. The result: Everyone in Iraq hates Americans.

Even after 19 years of non-stop failure, the Americans have not understood the basic composition of the Iraqi society. Their policymakers and their media mention Shias, Sunnis, and Kurds as three components of the population.

This is sheer ignorance.

If the purpose is to divide the society along the sectarian lines, one can only mention Shias and Sunnis. Because Kurds are also Sunnis; they are not a sect.

If they want to split the society along the ethic lines, only Arabs and Kurds should be mentioned. Shias and Sunnis are both ethnic Arabs.

The picture is actually quite complicated.

There are several million ethnic Turkmens (Turcoman) in Iraq who were the traditional inhabitants of the areas that are rich in oil.

A sizeable portion of the population belongs to South Asia. They came to Iraq during various periods and for various reasons.

There are reasons to believe that the current American policy in Iraq is to fan the hatred among the Shias, Sunnis, and Kurds to the extent that they should declare autonomy.

With the meager insight the Americans have of the Iraqi society, this would be disastrous. The consequences will spread far and wide and will reach Central Asia.

In Afghanistan, the nuts and bolts of a deal between the Americans and the Taliban are almost in place. If all goes well, the deal could be announced near the end of this month. After that, the process of inter-Afghan dialogue will start.

This is the best case scenario.

However, there are people who would go out of their way to oppose, possibly defeat, this deal. Some of the interest groups in Afghanistan will not be happy with peace. Some of them are aligned with the American establishment.

The prospects for peace in Afghanistan are directly proportional to the desire for peace by the American side.

There is a single test to judge the sincerity of the Americans – Can they design a peace deal that will prevent civil war in Afghanistan?

If the Americans leave Afghanistan and their sole legacy is a nasty civil war, it will be a wholly troublesome outcome for Central Asia.

In case of Iran, the Americans will have to make up their mind: Do they want a lasting peace in the Middle East or do they want a dragging tussle with Iran? This is either/or situation.

Arguably, Iran is a difficult country to deal with, but it is also a fact that the Iranians are some of the most resilient people in the world. They can also be the friendliest people when the conditions are right.

The full economic potential of Central Asia is hostage to the American hostility toward Iran.

China and Russia are both part of the extended region. They are also strategic partners of Central Asia with widest possible areas of economic interaction.

The unnecessary goading of China and Russia by the United States is a source of concern for Central Asia. The region needs to brace itself against all kinds of uncertainties at all times. This is harmful distraction.

This is the case of the United States under team Trump.

Actually, part of the problem is that CIA is running the show from both ends and there is no Department of State in sight. Diplomacy and arm-twisting are perfectly interchangeable synonyms.

If the Nike logo – Just do it – is at the core of their philosophy, hardly any sophistication can be expected in the process of decision-making.

What should Central Asia do?

Next question – What should be the contours of neutrality to deal with the damaging consequences of the American policies?

For a model of neutrality to succeed in the given situation, it should be based on a clean, minimalist approach.

Neutrality is the ability to exercise total impartiality.

Neutrality is directly associated with peace.

There are several countries around the world that exercise some kind of neutrality. They are all different from each other. Neutrality is not monochrome; there is every colour from the palette in the different versions of neutrality.

What is relevant and useful for Central Asia is the model of neutrality systematically developed by Turkmenistan.

For the sake of coordination on the key issues, there is the need to institutionalize the council of the heads of state of Central Asia as a permanent body. Its permanent can logically be based in Ashgabat, where the UNRCCA is located.

Creation of a joint model of neutrality for Central Asia should be treated as a top priority task. /// nCa, 18 February 2020