You are here: Home / Articles And Reports / Turkmenistan – United Arab Emirates: a quarter-century of experience, milestones of the future

As in the life of every person, there are special dates and memorable events in the history of bilateral interstate relations.  And probably one of these events is the establishment of bilateral relations between the two countries. The establishment of diplomatic relations, symbolizing the official start of mutually beneficial bilateral cooperation, provides an opportunity to further enhance interstate relations based on the principles of friendship and mutual trust. Independent, permanently neutral Turkmenistan has established diplomatic relations with 149 countries of the world. These relations are progressively developing in accordance with mutual interests and aspirations.

The year of celebration of the 25th anniversary of permanent neutrality coincides with the 25th anniversary of the establishment of diplomatic relations between Turkmenistan and the United Arab Emirates. Remembering the significance of this remarkable date in the history of interstate relations, we had a conversation with the charge d’affaires of the Embassy of the United Arab Emirates to Turkmenistan, Mr. Abdul Aziz Abdullah Al-Hashemi.

-We cordially congratulate You on the 25th anniversary of the establishment of diplomatic relations between the two countries and wish you to further strengthen the foundations of mutually beneficial cooperation! This glorious date provides a great opportunity to review the achievements in bilateral relations.

– Thank you very much! Taking this opportunity, I would like to congratulate the President of Turkmenistan and the government of Turkmenistan on the 25th anniversary of the international recognition of the status of neutrality and the establishment of diplomatic relations between our countries! We are very confident that our relations will continue to develop successfully for the sake of peace and sustainable development. 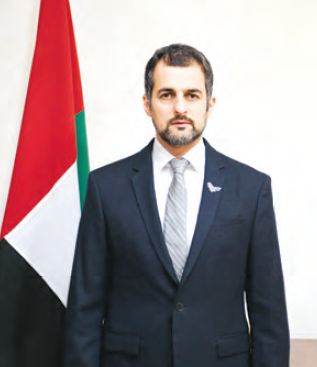 This significant date in the history of diplomatic relations really allows us to talk proudly about the success achieved in all areas of bilateral cooperation. Our countries are linked by centuries-old historical ties and commonalities. Being one of the first countries, recognized the independence of Turkmenistan, the United Arab Emirates attaches great importance to the development of mutually beneficial cooperation. The visits of the heads of state of the two countries and the current interaction in political and diplomatic areas contribute to bringing our cooperation to a qualitatively new level. 49 agreements signed in various fields since 10 October 1995 – the date of the official establishment of our diplomatic relations – have strengthened the legal framework of our interstate relations. This, first of all, creates favorable conditions for enriching the content of cooperation in the interests of the two countries with traditional and modern priority areas. It should be noted that the official visit of President of Turkmenistan Gurbanguly Berdimuhamedov to the United Arab Emirates on 15-16 March 2018 has opened a new page in the history of interstate relations. During the summit talks in Abu Dhabi, prospects for bilateral cooperation were discussed and specific tasks for their development were identified.

Despite the pandemic-caused ongoing emergencies in the world, I would like to say that the Turkmen-Emirati cooperation is proceeding steadily. This is evidenced by the fact that negotiations continued at various levels throughout the year. As known, on 25 July this year, the Turkmen Leader had a telephone conversation with the Vice-President, Prime Minister, Emir of Dubai Sheikh Mohammed bin Rashid Al Maktoum, as well as with the Crown Prince of Abu Dhabi, Deputy Supreme Commander of the United Arab Emirates Armed Forces Sheikh Mohammed bin Zayed Al Nahyan. Also on 22 July, the foreign minister of Turkmenistan had a telephone conversation with Sheikh Mansour bin Zayed Al Nahyan, Deputy Prime Minister and minister for presidential affairs. The parties also discussed in detail the topic of maintaining the dynamic development of interstate relations, as well as issues of political, trade, economic, cultural and humanitarian cooperation.

– Recently, a regular meeting of the Joint Commission on cooperation between Turkmenistan and the United Arab Emirates was held on a videoconference. How do you assess its outcomes?

– First of all, it should be noted that the Commission was created to expand trade, economic, scientific, technical, cultural and humanitarian ties between the two countries. Because these are the priority areas in interstate relations, as well as in the Turkmen-Emirati cooperation. The third session of the joint Commission, which was held online, defined important tasks related to the current state and prospects of bilateral relations. The main tasks are to increase mutual trade, activate trade and transport cooperation, attract the UAE business community to participate in major projects in Turkmenistan, expand cooperation in the field of investment and the “green” economy. In particular, the parties are interested in cooperation on the construction of the Turkmenistan-Afghanistan-Pakistan-India gas pipeline.

The Protocol signed after the meeting of the Joint Commission on cooperation also attaches great importance to the development of cultural and humanitarian cooperation. In this regard, I would like to highlight the books by President of Turkmenistan Gurbanguly Berdimuhamedov published in Arabic. The availability of such books of the Turkmen leader as “Horse has both loyalty and fun” and “Turkmen Alabai” is very meaningful for book lovers all over the Arab world, as they can now become more familiar with the national values of the Turkmen people and promote them. In the United Arab Emirates, these books are highly valued. As known, every year Sharjah, UAE, hosts an international book fair, which has been organized regularly since 1982. This event, which is well known in the publishing industry worldwide and in the Arab world, attracts millions of book lovers. At the same time, I would like to say that we fully support the participation of Arabic translations of the books “Horse has both loyalty and fun” and “Turkmen Alabai” written by Mr. President Gurbanguly Berdimuhamedov at the international book fair in Sharjah.

-The ongoing crisis in the world continues to have a negative impact on the economic cooperation. Could you share your opinion on the efforts to create new directions in bilateral relations?!

-Despite the difficult situation caused by the pandemic, it should be noted that the Turkmen-Emirati relations are developing dynamically in the most key areas. Our countries have huge reserves of hydrocarbon resources. At the same time, it is noteworthy that both Turkmenistan and the United Arab Emirates are making efforts to develop non-extractive sectors of the economy. It is about diversification of the economy and ensuring sustainable growth amid the global economic crisis. At the same time, it is important to maintain stable trade and economic relations between the two countries.

The indicators of trade turnover between our countries in previous years indicate that there are favorable preconditions for intensifying the pace of export-import operations. While Turkmenistan exports textiles, carpets and carpet products, dried fruits to the UAE, and cars, auto parts and food products are imported to the Turkmen market from the United Arab Emirates. By the way, in June 2019, a store of Turkmen carpets, textiles and souvenirs has opened in Dubai. This event was a significant step in the development of the Turkmen-Emirati trade cooperation. The opening of the Consulate General of Turkmenistan in Dubai, UAE, in accordance with the relevant decree of the President of Turkmenistan, is another clear example of the expansion of bilateral relations.

The United Arab Emirates has long attached great importance to the development of non-resource sectors of the economy. Our country, which places special emphasis on investing in major foreign projects, developing tourism and business, creating free economic zones, and developing areas such as real estate, aviation, and renewable energy sources, has managed to retain economic stability in the current complicated economic situation around the world.

The international renewable energy agency IRENA, established in 2009, is headquartered in Abu Dhabi. This, in turn, contributes to the expansion of cooperation on “green” energy sources. Given that Turkmenistan is also a member of the organization and actively participates in its projects, new opportunities emerge for enhancing Turkmen-Emirati relations in various sectors of the economy, not related to mineral resources.

– Turkmenistan’s permanent neutrality is a unique example of peace-building. Since the first years of independence, our friendly Turkmenistan has declared its commitment to the principles of positive neutrality in foreign policy, obtaining unanimous support of the United Nations member states. Today, Turkmenistan’s foreign policy, based on the principles of “open doors” and positive neutrality, is gaining great authority around the world. Over the past quarter-century, the Turkmen model of neutrality has steadily strengthened its role in maintaining peace and tranquility in the region and around the world.

In 2020, Turkmenistan marks the 25th anniversary of international recognition of the status of neutrality. The coming year-2021-was declared the “Year of international peace and trust” by the UN General Assembly on the initiative of the President of Turkmenistan. We consider this event as a kind of succession of events in honor of the 25th anniversary of the Turkmen model of neutrality. We are very confident that the United Arab Emirates and friendly Turkmenistan are supporting and will always support each other in their initiatives at the United Nations.

– Thank you very much for telling us about the achievements in the quarter-century history of relations between Turkmenistan and the United Arab Emirates. We wish you success in your responsible work for the benefit of the friendly peoples of the two countries!