Ashgabat, 22 March 2012 (nCa) — The countrywide celebration of Nowruz, the spring festival, started 21 March in Turkmenistan. The main event was held at the foothills of Kopetdag Mountain, some 45 km east of Ashgabat. It was a great privilege for the foreign diplomats and journalists to get invited to this unique national festivity.

Being there was an exercise in total immersion. Of the more than 400 photos, we have chosen just one to include here to give a feel of the day. 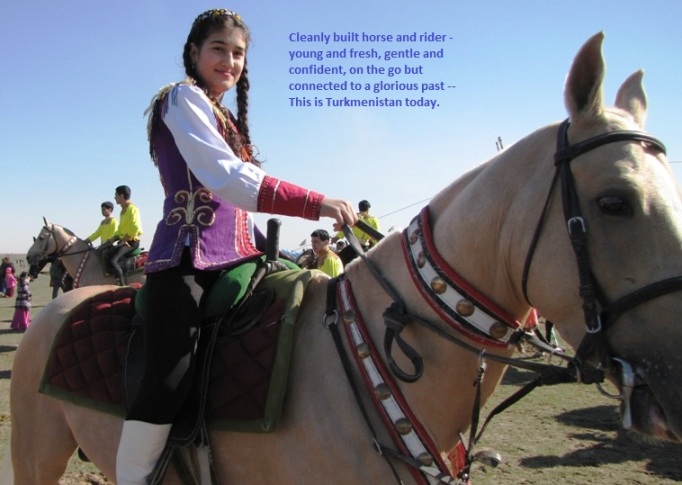 Spread across a vast expanse of gently rolling pastureland was everything that collectively forms the heart and soul of Turkmen culture and tradition.

One could see the process of carpetmaking right from start when the wool is handspun into yarn. Making of felt was also at display.

Chorba, the thin mutton soup, and Pilov, the rice and meat dish, were being cooked in huge open pots. Several kinds of barbecue was spreading its mouth watering aroma in the air.

National dresses and pottery were arranged in logical clusters so that anyone could understand the significance of why a particular region prefers certain colours and styles.

There was an open air concert where the nationally known artists not only performed but also mixed with the people.

The horse show competed with rope walkers and acrobats for attention of crowds, and won easily. After all, Ahalteke is not just a horse; it is a family member.

There were dog, rooster and ram rights – the judges ensured strictly that animals were not injured. Two dogfights were stopped within a few seconds of start when it appeared that the underdog will get injured. Victory in dogfights is on technical points rather that knockout. However, the dogs don’t care for rules; they were simply spoiling for a good fight.

In makeshift stalls one could see the prized camels and their newborn, the Sarja, Karakul and Merino sheep with their freshly born kids, the Swiss, Holstein and local cows, the Marco Polo sheep and the mountain goat. The mixed smell of hay and warm manure reminded of the days when the world was not such a complicated place.

Bringing all of it together must have been a logistical nightmare. The organizers left nothing to chance. It was evident everywhere that someone had paid attention to not only secondary but also tertiary details.

In the yurts where the guests were seated for lunch, there was a microwave oven and a food warmer so that nothing was served cold or even lukewarm. The elaborate menu and the wide choice of drinks rivaled that of any good restaurant.

Nowruz was put on the list of UNESCO list of cultural heritage on 30 September 2009. The 64th session of the UN General Assembly in February 2010 adopted 21 March as International Day of Nowruz.

[A related photo essay will be published later at our website]