You are here: Home / Articles And Reports / Tinkering with Islam in Central Asia

Ashgabat, 1 July 2011 (nCa) — Tajikistan is embarking on a flawed plan that will backfire with region-wide repercussions.

A legislative bill banning religious education and religious activities (except for funerals and mourning) for children and teens has passed the lower house of the Tajik parliament nearly unanimously; only two opposition MPs voted against the bill. It is on track to become law within the next few weeks or so.

This is actually a softened version of the original bill that proposed to ban all children from attending any religious worship at all.

The edition narrows the focus to religious education and religious activities, making the parents responsible for the actions of their children. The only exception is the students officially enrolled in the religious schools affiliated with approved mosques. 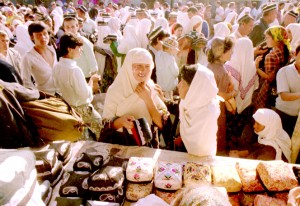 The problem is that currently there are more than 2.5 million Tajik children under the age of 15. The demographic profiling suggests that some 90% of them are Muslims.

There are only 13 mosques in the country with the permission to hold religious instruction classes. This number would increase 61 as more mosques get licensed to impart religious education. However, even if 5% children are sent for religious education (usually in the late afternoon, after regular school classes), it comes to more than 2000 potential students for each mosque school. There is neither the space nor the teaching capacity to take all the students.

What about the rest of the children?

More likely than not they would get absorbed in the backroom schools that exist, and would multiply as recoil effect after this law, in most towns and villages.

One can ask: Is religious education necessary? Are children atheists or deists by birth?

Looking at the situation in the region and the role of Islam in the Central Asian societies, there is no doubt that correct and balanced religious education is absolutely necessary.

As far as a child being atheist or deist by birth, one can support both sides of the question with equally convincing arguments. However, Tajikistan is predominantly a Muslim country and the Islamic belief is that all children are born on the nature of Islam.

It is important to understand the essence of this assertion: Being born on the nature of Islam means that all children, no matter where they are born, have the innate ability to understand and accept the concept of good and bad.

Being Muslim and being born on the nature of Islam can be two different things.

Being born on the nature of Islam is a simple and understandable concept but being a Muslim can mean different things to different people ——- The Tajik plan fails to acknowledge this distinction.

The chances are that once the Tajik law on Islamic education is in place, other Central Asian countries may have the itch to follow the suit. This would be a self-induced disaster.