You are here: Home / Articles And Reports / Strapping bomb to your daughter

Whose daughter is Sohana Jawed?

She is your daughter; she is my daughter. Yes, she is our daughter, only if we are still human.

Beware all parents! Americans are desperate now and they would stop at nothing. Americans and their handpicked future king of Afghanistan, Amrullah Saleh, are hell bent to start a massive civil war in Pakistan.

Sohana Jawed, a nine year old Pakistani girl, was kidnapped on Saturday when on her way to school in Peshawar. She says that two men and a woman grabbed her, put her in a car, knocked her unconscious by forcing her to breathe through a sedative-laced handkerchief and drove her to some unknown location.

The next day, she says, they made her wear a heavy jacket – which was actually a suicide jacket packed with 9 kg of explosives – and asked her to stand near a paramilitary post in lower Dir district. It is obvious that they were going to detonate the jacket through a remote control device in the vicinity of the paramilitary troops, blowing to bit the girl and the soldiers.

The girl, showing remarkable presence of mind, ran away from her captors, removed the jacket at the last moment and rushed to the soldiers, at which the kidnappers panicked and ran away.

The girl was still in school uniform when she told her story to the media in the presence of the lower Dir district police chief.

This story, told by little Sohana, may or may not be true. It is actually immaterial whether it is an entirely fabricated tale.

What is important is the act of using a little girl for this odious work and the location where it took place. Yes, the location is probably even more important because it has wider implications. That tells us who is trying to do what.

The place where Sohana was supposed to be smashed to a mass of sticky goblets of flesh and blood is Timergarah in lower Dir, a passageway for American-trained mercenaries who previously came through this route and played the drama of ‘imposing Sharia’ in Swat.

Lower Dir has common border with Afghanistan and is a convenient itinerary to Swat. The terrorist training schools run by Americans in Afghanistan, some of them under the supervision of Amrullah Saleh, the former head of Afghan security services, are now desperate to trigger civil war in Pakistan, pitching the people against the armed forces.

[Our forthcoming investigative-analytic series ‘Smashing Greater Central Asia’ will help explain the dynamics behind this and other related incidents. Ed.] 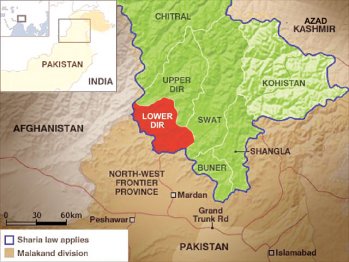