You are here: Home / Articles And Reports / Outcomes of SPIEF 2021 – Areas of direct relevance for Central Asia – Part Two 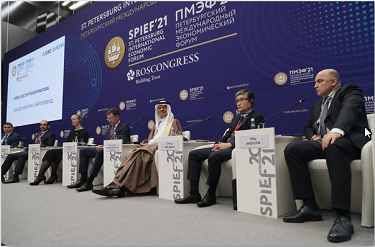 In addition to the plenary session, there were several panel discussions at the St. Petersburg International Economic Forum (SPIEF).

The theme of one of them was: Energy Sector Transformations

Here is the summary of the session, prepared by the forum organizers:

“Today, there is a demand among the world’s population for improving the climate situation and reducing emissions as well as demand for environmental protection and more eco-friendly fuels. Of course, this process is inevitable, but much depends on the pace of energy transition. […] More than 30 countries have already announced a transition to carbon neutrality,” Deputy Prime Minister of the Russian Federation Alexander Novak said.

“We need energy transition in the interests of people and the planet. […] We shouldn’t forget about all energy resources. We don’t need to change where we get energy from, but how we consume it. Our job is to humanize the use of energy and make it accessible to more people. […] The style of collaboration is changing; it no longer just takes place between the private sector and governments, but between industry and people,” World Energy Council Secretary General and CEO Angela Wilkinson said.

“In Russia, we are committed to both the development of traditional energy sources and diversification, while also taking into account the emergence of new markets, such as the liquefied natural gas markets, considering that in the future oil will also be actively used not as a fuel, but as a source to produce consumer goods,” Deputy Prime Minister of the Russian Federation Alexander Novak said.

“Natural gas will help the energy industry make this transition, while remaining the foundation of the energy sector. […] Today, methane is increasingly used as a fuel and this trend is on the rise,” said Oleg Aksyutin, Deputy Chairman of the Gazprom Management Committee, Head of Department 623.

“This scenario is appealing, but how are we going to make this transition? […] It would be great if we could take advantage of the potential that this transition period provides us so that we can make humanity happy regardless of where people live,” Minister of Energy of Saudi Arabia Abdulaziz bin Salman Al Saud said.

“A lot depends on technology. If it appears, it will develop in this direction. Storage and digital technologies, CO2 capture and disposal technologies, hydrogen utilization. We talk a lot about this, but, unfortunately, so far there are few technologies that can be commercialized. They are not yet competitive. We need to work on this,” Deputy Prime Minister of the Russian Federation Alexander Novak said.

Development of alternative energy sources is risky from a financial standpoint

“Everyone read the forecast of the International Energy Agency and the recommendations that funding for new investment projects in the oil, gas, and coal industries needs to stop starting from 2021. But I can’t imagine […] what will happen? Oil prices will probably be USD 200. […] We must take a more responsible approach to the proposals that are made in this regard,” Deputy Prime Minister of the Russian Federation Alexander Novak said.

“We are talking about huge amounts that are generated in the energy sector. […] It is important to consider what they can be spent on […] and understand what technologies need to be developed and improved in order to neutralize all fears,” Minister of Energy of Saudi Arabia Abdulaziz bin Salman Al Saud said.

“We need to calculate more accurately whether there will be sufficient new energy sources – sun, wind, hydrogen – to cover these needs. Obviously, their share will grow, but we shouldn’t abandon existing energy sources today. We need to make sure that these energy sources are also eco-friendly,” Deputy Prime Minister of the Russian Federation Alexander Novak said.

“If we use composite materials, it will also have a very strong impact on the environment from a positive point of view because less CO2 is emitted during their production,” Rosseti General Director and Chairman of the Management Board Andrey Ryumin said.

We need to unlock the unused potential of existing energy capacity

“To date, there is no alternative to hydro-accumulation on the planet. […] Russia has utilized 20% of its hydro potential. We were lagging two times behind a number of countries such as China and Brazil, and four times behind more developed economies. We have room to develop,” RusHydro Chairman of the Management Board and CEO Victor Khmarin said.

“The future is also in nuclear energy. […] Power generation from nuclear sources at nuclear power plants is the lowest based on its carbon footprint: 6 grams per 1 kilowatt per hour of CO2 equivalent, while solar is 80 grams and wind is 14 grams […] Russia will be working on developing small nuclear generation […] for the production of nuclear energy in small units – from 5 to 100 megawatts,” Deputy Prime Minister of the Russian Federation Alexander Novak said.

“The gas we have needs to be used more efficiently and more environmentally. […] Today, three-quarters of hydrogen is produced from methane around the world. Today these technologies […] are less expensive,” said Oleg Aksyutin, Deputy Chairman of the Gazprom Management Committee, Head of Department 623.

The summary of the panel discussion produced here has been taken from the SPIEF website: https://forumspb.com/en/news/news/buduschee-energetiki-energoperehod-1/

This panel voiced sensible, quite plausible ideas. However, Central Asia, because of its certain natural advantages, cannot consume it wholesale.

The speakers in this panel represented the countries significantly dependent on hydrocarbon revenues. Three countries in Central Asia – Kazakhstan and Turkmenistan, and to a lesser degree Uzbekistan – also draw considerable part of their revenues from the hydrocarbon resources. However, this similarity does not mean that they should reach the same conclusions.

The main point of difference is the contention of the panelists that investment in alternative energies is risky from the point of view of commercially competitive production.

Central Asia, with plenty of solar and wind potential, is in a position to produce electricity from alternative sources in large volumes. The technologies are already available to make the cost of power generation from these resources equal to or even less than the production of electricity from the hydrocarbon resources. Therefore, Central Asia can safely discard this part of opinion of the panelists.

As far as the point of view that oil, and at later stage gas, are too valuable to be just burnt away as fuel, is what we at nCa have advocated for long. Oil and gas are full of possibilities for highly valuable downstream products and the technology has still not reached the outer limit of those possibilities.

In this area we will agree with the panelists that while we pursue the alternative energy resources, we must also focus on technologies and methods for better refining of hydrocarbon resources and promote a culture of eco-responsibility among the consumers.

On the whole, the ideas expressed by the panelists are worth serious thought by decision makers in Central Asia. /// nCa, 8 June 2021