During the meeting, the participants exchanged views on two issues included in the agenda of the meeting, namely an overview of cooperation between the EU and Central Asia and its prospects, as well as regional and international issues. 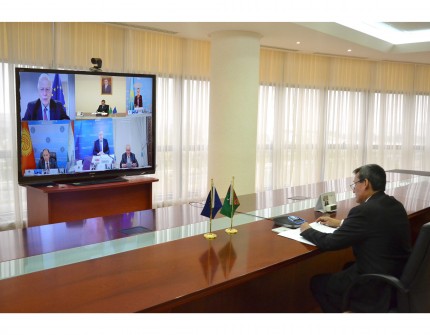 On each of the above issues, the heads of the foreign ministries expressed their views and exchanged views on the priority areas of interaction within the framework of the “Central Asia – European Union” format.

Based on the results of the meeting, a Joint Communiqué was adopted.

During the ministerial meeting, the Turkmen side called on to follow the principle of integrity and indivisibility of global security

At the meeting of the heads of the foreign affairs agencies of the European Union and Central Asian countries, Minister of Foreign Affairs of Turkmenistan Rashid Meredov announced national priorities on the most important issues of the regional and global agendas of multilateral cooperation.

In particular, the head of the Foreign Ministry once again confirmed the position previously announced by the President of Turkmenistan on considering security as a single, integral category, which is characterized by its indivisibility.

At the same time, the Turkmen side emphasized that one of the main ways to strengthen stability and security in the world is the use of a wide arsenal of political and diplomatic means and methods available to the international community today.

In this context, the importance of Turkmenistan’s initiatives on the practical application of the principles of positive neutrality, as an effective tool for solving various international issues, including the settlement of conflicts, was noted.

During the ministerial meeting in the format “Central Asia – European Union”, the delegation of Turkmenistan paid special attention to the need to jointly resolve crisis situations arising from political, economic, humanitarian, natural, man-made and other reasons.

It was emphasized that Turkmenistan intends to increase its participation in international programs, funds and related projects created to prevent crises, as well as minimize their negative consequences.

In particular, the efforts of the Turkmen side to address humanitarian and social issues through participation in the formation of the Central Emergency Response Fund (CERF), established by the United Nations General Assembly, were noted.

In this regard, it was reported that on December 8 of this year, during the upcoming high-level pledging event to CERF, convened by the UN Secretary General, Turkmenistan will officially announce its next financial contribution to this humanitarian fund.

In addition, the Turkmen side drew attention to the intensification of cooperation between the country and the UN Office for the Coordination of Humanitarian Affairs (UN OCHA), within which it is planned to launch joint implementation of new projects in 2021.

At the ministerial conference of the European Union and Central Asian countries, the Turkmen side urged the participants to pay serious attention to the problem of climate change.

In this context, the delegation of Turkmenistan stressed that each of the countries participating in the Central Asia-European Union format should make every effort to implement the provisions of the Paris Agreement.

In this regard, it was noted the intention of Turkmenistan to declare at the upcoming Climate Ambition Summit on December 12 about its obligations related to the implementation of the Paris Agreement at the national level.

The pursuit of zero greenhouse gas emissions was identified as one of the main elements of the complex of national efforts in this direction.

In addition, it was reported that in the very near future it is planned to adopt the Law of Turkmenistan “On Renewable Energy Sources” and the National Strategy for the Development of Renewable Energy, aimed at ensuring a gradual increase in the share of renewable energy in the country’s energy sector.

The large-scale national tree planting campaign, which has planted more than 90 million seedlings in the country over the past 20 years, was highlighted. It was reported that this year the number of trees planted will be 25 million.

The Joint Communiqué, adopted following the 16th Ministerial Meeting in the “Central Asia – European Union” format, underlined the importance of Turkmenistan’s initiatives aimed at enhancing the role of the policy of Neutrality as an important and effective instrument of peacemaking and reaching consensus decisions in international relations.

In particular, the heads of the foreign affairs agencies of the European Union and Central Asian countries welcomed the initiative of Turkmenistan to hold an international conference “Policy of neutrality and its role in ensuring international peace, security and sustainable development” in Ashgabat on December 12, 2020, dedicated to the 25th anniversary of the international recognition of the status of permanent neutrality of Turkmenistan.

The participants in the ministerial meeting also welcomed the creation at the UN platform of the Group of Friends of Neutrality for Peace, Security and Development, of which a number of Central Asian countries and the European Union are members. /// MFA Turkmenistan, 17 November 2020