You are here: Home / Articles And Reports / Covid-19: The midstream challenge and some good tactics from Turkmenistan

We are in the midstream – this strain of coronavirus is still wreaking havoc around the globe even  though there are some encouraging signs here and there.

No one is to blame if the world doesn’t have a coherent strategy, a reliable roadmap, or a truly global leadership. We are learning as we struggle with this amorphous challenge. Furthermore, any attempt to assign the blame would be like a round of racquetball – the ball will keep bouncing back from every wall.

We have still not reliably mapped the behavior pattern of this strain of coronavirus.

We thought that the incubation period of Covid-19 is 5-15 days but now we know that it can activate within 1.5 days.

We expected that anyone who recovered from the attack of this virus would become immune to its second strike. Now we are not sure.

We estimated that two meters is adequate social distance but some studies suggest that the virus could possibly be contracted from a distance of up to four meters.

We believed that the elderly, the people over the age of 65, are mainly the vulnerable group. Now we see that anyone can be a victim regardless of age or state of health.

We are also surprised by its ability to multiply and spread so very fast and its particular structure that attaches firmly to the human skin and tissues.

We have found three strands of this virus and we don’t know yet whether it can mutate further into deadlier versions.

We are suffering immediate losses in terms of human lives and we are accumulating potential losses in the shape of damage to the economy.

Theoretically speaking, Covid-19 could have been contained by a strict, total, uncompromising lockdown of about four weeks everywhere around the world.

However, we are on the horns of a dilemma.

A graph in the recently released World Bank Economic Update in the backdrop of Covid-19 illustrates the situation: 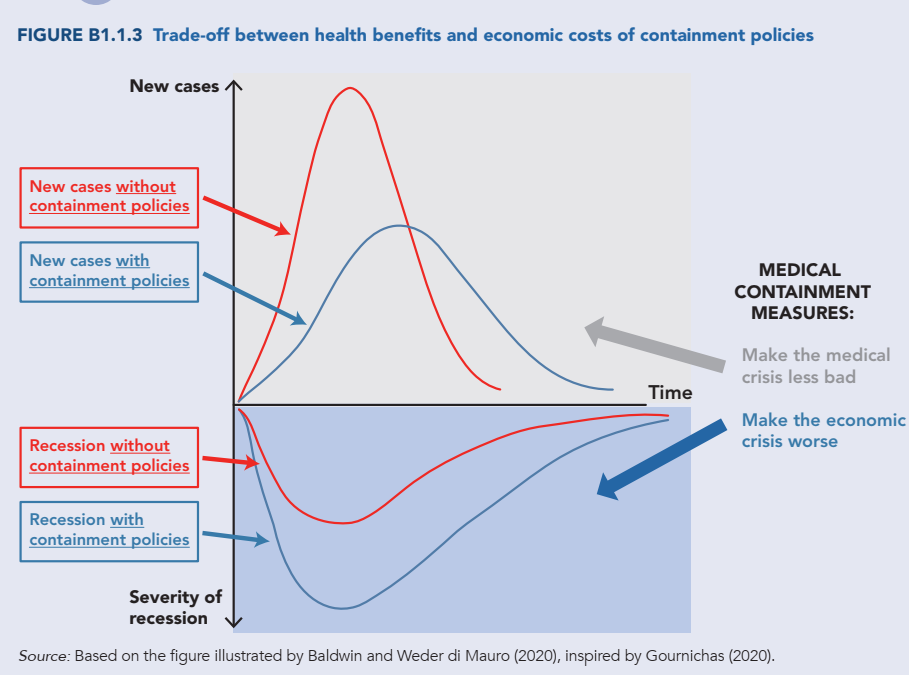 If we enforce stringent measures to contain the virus, it will worsen the economic recession.

If we stimulate the economy, it will give free rein to the virus.

It is an either/or situation. —– Which curve to flatten?

The world is in search of a balanced solution – how to come out of this crisis with minimum loss of human life and least damage to the economy.

Turkmenistan, in its attempt to prevent the virus from entering its territory, has used certain methods. Some of them could be of interest to the world.

Also, Turkmenistan has some natural advantages.

There is also no Conurbation (population three to ten million) or Metropolis (population one to three million) in Turkmenistan.

The chief city in Turkmenistan, the capital Ashgabat, can be classified as a ‘large city,’ which by definition is a city of less than one million but more than 300000.

Ashgabat is planned in such a way that the shopping areas are scattered throughout the city.

The shopping areas are separated from the residential blocks by parking lots or other open spaces.

The mechanism of social distancing is inherently woven into the spacing of objects of different purposes.

The golden lesson of town planning here is that the cities should not be allowed to grow beyond a certain size.

When the virus started flying from country to country, the government in Turkmenistan acted fast. In addition to the closing of borders, one of the first acts of the authorities was to assure the public that there would be no shortage of essential items.

It was a difficult promise considering that every country was locking down its borders and the movement of goods was in jeopardy.

Certain border points were designated from which the goods trucks could enter or leave Turkmenistan. At the border, the change of drivers takes places. The trucks can enter the territory of Turkmenistan after due fumigation measures but not the drivers. Within Turkmenistan the Turkmen drivers take over. In case of a container, the prime mover is changed.

The second step was to introduce a special algorithm to the database – identify the location of surplus stocks, and match them with the areas where those items are in high demand.

The third step was to source some necessary items from the neighbouring or regional countries.

The combined effect is that there was no panic buying, no emptying of shelves in the markets.

The federal, provincial, and city or town governments in Turkmenistan maintain their own shops. When required, certain items can be offered at subsidized prices from these outlets. It is a way of providing economic cushion to the population.

Special medical teams have been trained and mobilized to check the entire population for any threats to their health. The teams are making rounds and will complete their check up routine by the first week of May 2020.

The agricultural work, particularly at greenhouse farms, the dairy and poultry farms, and food processing facilities continues with due caution. The purpose is to retain the ability to provide the markets with the essential food items.

Most of the meetings are taking place through the video link. While the contact is not actively discouraged, the conditions are provided for working without physical meetings and visits.

The strategy of Turkmenistan is composed of a balanced approach. The purpose is to stay safe without disruption of life. /// nCa, 17 April 2020