On 3 May 2019, Tashkent hosted 11thministerial meeting of the States Parties to the Memorandum of Understanding on Sub-regional drug control cooperation in Central Asia.

A Memorandum of Understanding on Sub-regional drug control cooperation was signed in 1996 in Tashkent by Kazakhstan, Kyrgyzstan, Tajikistan, Turkmenistan and Uzbekistan. Russia joined the document in 1998 and Azerbaijan – in 2001.

In 2004, as a follow-up to the Memorandum, the Central Asian Regional Information Coordination Center (CARICC) was established in Almaty, which has become an effective platform for combating drug trafficking in the Central Asian region.

All participants in the Tashkent meeting reaffirmed commitments of their states and organizations to the implementation of the international obligations to combat terrorism and drug trafficking.

The event was opened by the foreign minister of Uzbekistan Kamilov.

“In today’s world, no state can alone confront the challenges associated with illicit trafficking in drugs and narcotic substances”, he said during welcoming remarks.

First, situation in Afghanistan is one of the main sources of the drug threat in Central Asia.

“Despite the measures taken in the Central Asian states to combat drug trafficking, transnational drug groups are trying to use the territory of the regional countries as a channel of drug trafficking along the so-called “Northern route”, he said.

The foreign minister of Uzbekistan urged to aim the regional efforts at helping to the cease of the Afghan conflict, the launch of the peace process, the immediate resolution of acute socio-economic issues in Afghanistan, which contribute to the growth of the drug threat.

Secondly, drug trafficking today is one of the main sources of financial support for extremist and terrorist, criminal groups, as well as one of the key elements of their transnational relationships.

Uzbekistan considers it important to give priority attention to the education of young people, the formation of an anti-drug environment, and the improvement of social prevention of drug addiction and radicalization.

Thirdly, the emergence and widespread use of new types of synthetic drugs and psychoactive substances is becoming a global problem.

“According to experts, the so-called “designer” drugs regularly appear on the market, while the international drug control system constantly faces the problem of their rapid production”,Kamilov said.

He also stressed the need for law enforcement agencies of Central Asian countries to elaborate new approaches to the organization of practical and legal activities to identify and suppress the drug dealers.

SCO Secretary General Vladimir Norov spoke on the plans of his organization to support Central Asia in addressing the illicit drug trafficking. Most of the Central Asian countries are SCO members.

“The international drug problem is becoming global and our common responsibility, which should be realized in the context of broad multilateral cooperation,” Norov said.

Last year, the SCO summit in Qingdao approved the SCO Anti-Drug strategy for 2018-2023, its Action Programme and the SCO Concept for the prevention of drug abuse.

A working plan for the implementation of this Programme will be submitted for approval by the Council of heads of SCO member states in June this year in Bishkek.

On the basis of these documents, a comprehensive interaction of the SCO member countries is being unfolded to strengthen drug control measures and combat drug crime, as well as activities for the prevention and treatment of drug addicts.

According to Norov, in the second half of this year, on the initiative of Kazakhstan, it is planned to conduct operation “Web”, providing for joint measures to combat the drug threat.

SCO also studies the opportunities for trilateral cooperation in such formats as SCO – UNODC – ASEAN and SCO – UNODC – OSCE in the areas of security and drug control.

Tajikistan to host the High-level Anti-terrorism Conference in Dushanbe

Foreign Minister of Tajikistan Sirojiddin Muhriddin invited the participants of the Tashkent meeting to participate in the High-level Conference “International and regional cooperation in the fight against terrorism and its financing sources, including drug trafficking and organized crime”, which will be held on 16-17 May 2019 in Dushanbe.

The 11th meeting of the Parties to the Memorandum of Understanding on Sub-regional drug control cooperation resulted in adoption of a Declaration on strengthening cooperation in the field of combating illicit trafficking in drugs and precursors, prevention of drug abuse and psychotropic substances. 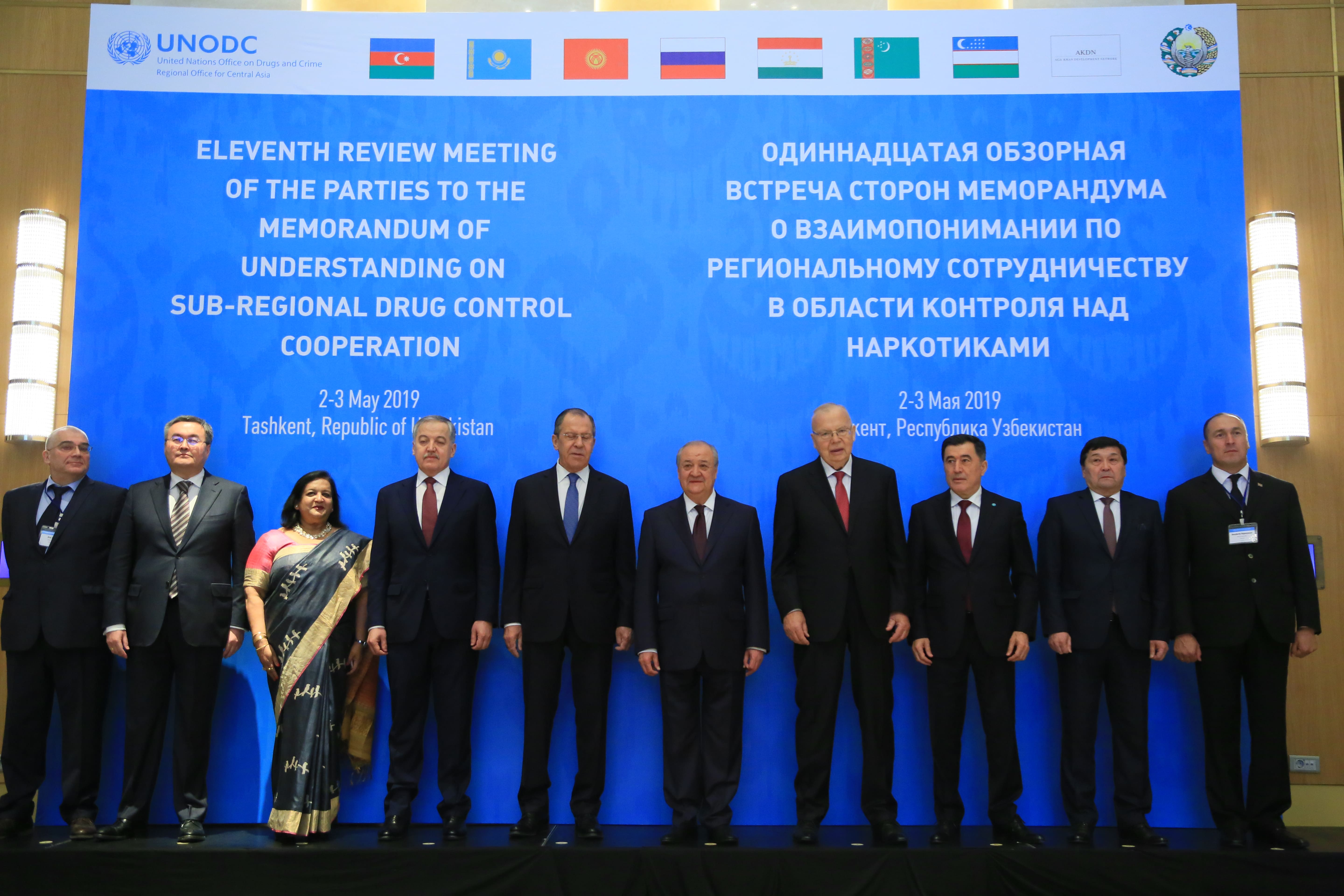 Drug transit running through Central Asia from Afghanistan is one of the main security challenges for the region.

Today, according to estimates from various organizations and agencies, Afghan land is the source of up to 90% of the world’s gross drug production.

The salient surge in the cultivation of opiates took place after the intervention of the NATO contingent to Afghanistan in the aftermath of 9/11 events. Although, then hoped that the coalition forces will put an end to the drug scourge, the reverse happened.

During the Taliban government, from 1996 to 2001, the area of poppy crops from 57,000 hectares declined to 7,000 hectares. However, following USA/NATO invasion in the next 16-17 years, the poppy crops area neared the mark of 328,000 hectares. The figure was provedin August-2018 edition of the quarterly report of the US Special Inspector General on Afghanistan reconstruction. Moreover, the same report denied the statements of American officials that opium poppy is cultivated mainly in the territories controlled by the Taliban.

Mechanisms such as the strengthening of borders, real-time exchange of information, the building up technical/human capacities can eventually decrease drug trafficking, but not drain it all. As the saying goes, if you do not smash the snake’s head, no sense to break its tail.

The eradication of the drug problem requires painstaking and comprehensive effortson improving internal situation, in order to ensure socio-economic well-being at the national level, creating healthy environment for the development of society and preventing its radicalization/marginalization. /// nCa, 6 May 2019