On 16 July 2021, Tashkent hosted the fourth meeting of the foreign ministers of Russia, Kazakhstan, Kyrgyzstan, Tajikistan, Turkmenistan and Uzbekistan.

The key line of the discussions was the security issues in the region amid the deteriorating situation in Afghanistan and the possibilities of an inter-Afghan settlement in the emerging geopolitical realities after the US-NATO troops withdrawal. 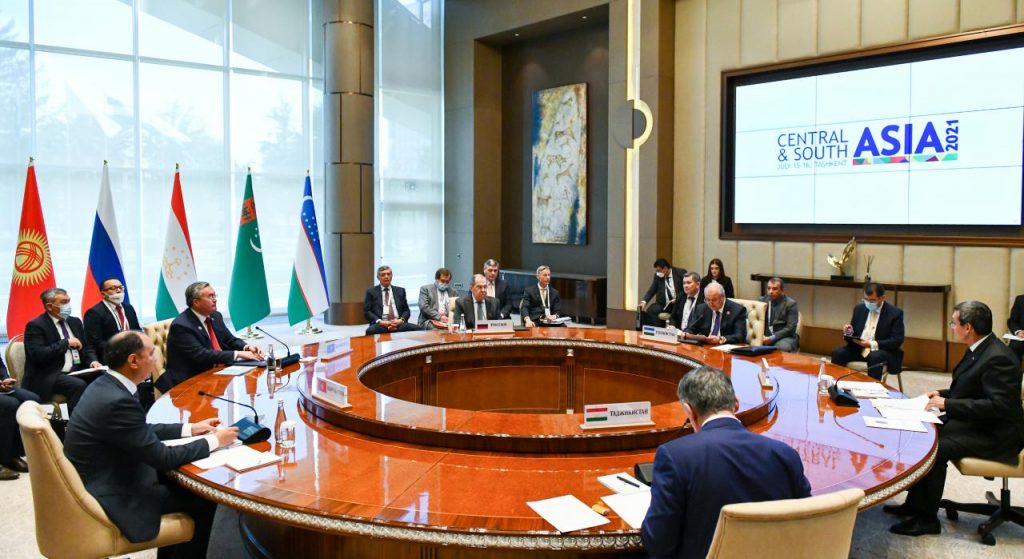 The minister of foreign affairs of Turkmenistan Rashid Meredov noted that the establishment of peace in Afghanistan is one of the important components of the stable and progressive development of the Central Asian region.

The Turkmen side proposed to forge cooperation within the framework of the initiatives on Afghanistan put forward by the UN Regional Center for Preventive Diplomacy for Central Asia.

In general, the participants of the meeting confirmed their common approaches to terrorist threats, threats of drug trafficking and foreign terrorist fighters flows to Afghanistan from war zones in the Middle East and North Africa.

The foreign ministers of Russia and the five Central Asian countries touched upon other issues of the international and regional agenda including measures to ensure global strategic stability, the state of integration processes, environmental cooperation.

They also discussed the issues of increasing the resilience during the multi-wave COVID-19 pandemic.

Following the meeting, the foreign ministers adopted a joint statement.

The fourth foreign minister meeting of Kazakhstan, Kyrgyzstan, Russia, Tajikistan, Turkmenistan and Uzbekistan took place in Tashkent on July 16, 2021. The participants noted that the situation in Afghanistan is a source of deep concern due to the withdrawal of foreign troops from that country and the subsequent escalation of hostilities between government forces and the Taliban, especially in the northern provinces bordering on the Central Asian states. At the same time, the ministers believe that, given this new geopolitical reality, it is necessary to look for ways to stabilise the military-political situation and establish peace in the Islamic Republic of Afghanistan (IRA). In this context, they urge all parties involved in the conflict in Afghanistan to refrain from the use of force and destabilising actions with a view to creating favourable conditions for promoting peace.

We are convinced that it is only possible to establish a comprehensive and durable peace in Afghanistan with direct, inclusive talks on a political settlement between the Afghans, under the leadership of the Afghan people, and with the more active assistance of states and international agencies to Afghanistan’s recovery in the post-conflict period.

We hope for constructive talks between official Kabul and the Taliban with the aim of drafting coordinated approaches to the cessation of a lengthy war and development of Afghanistan as a peaceful, independent and sovereign state.

In this context, we welcome efforts to achieve national reconciliation in Afghanistan at all dialogue venues, including the Istanbul process, with consideration for the results of the 9th Heart of Asia – Istanbul Process ministerial conference held in Dushanbe on March 30, 2021, the extended Troika (Russia, the US, China and Pakistan) and the Moscow format consultations on Afghanistan.

We emphasize the practical importance and efficiency of the results of the Seventh Regional Economic Cooperation Conference on Afghanistan (RECCA VII), held in Ashgabat on November 14-15, 2017. It was designed to integrate Afghanistan into the world’s economic system.

We recognize the importance of continuing the initiatives aimed at restoring Afghanistan’s socio-economic structure and integrating it into the regional economic processes under the common approaches that were developed at the Tashkent conference on Afghanistan entitled, “Peace process, cooperation in security and regional interaction, that took place on March 27, 2018.

We resolutely denounce terrorist attacks in Afghanistan, which lead to more civilian deaths. The continued presence and activity of the Islamic State of Iraq and Levante (ISIS), al-Qaeda and other international terrorist groups is one of the key factors that foment instability in Afghanistan, in some of its northern regions.

We are concerned about the expansion of drug crops and the high level of drug production and illegal arms trade. These are some of the main sources of income for terrorist groups and illegal arms turnover and we expect Afghanistan’s authorities to increase efforts on countering these threats.

We note that the UN is trying to help the government and the people of Afghanistan, and we declare our support for the UN Assistance Mission in Afghanistan and the Regional Centre of Preventive Diplomacy for Central Asia.

We welcome the first foreign minister meeting of the SCO countries and Afghanistan in the SCO-Afghanistan format in Dushanbe on July 14, 2021. We will continue the consistent implementation of the roadmap for the Contact Group’s further actions, which was signed in Bishkek following the SCO summit on June 14, 2019. /// nCa, 19 July 2021