Ashgabat, 30 May 2011 (nCa) — It is expected that the British audit firm Gaffney, Cline and Associates will certify that the Osman-Yoloton gas field of Turkmenistan has 23 trillion cubic meters (tcm) of in place gas reserves.

This information is from a reliable source but there is no way to confirm it until the GCA releases its audit report, probably by the middle or end of June 2011.

A GCA representative said during the second Gas Congress of Turkmenistan in Avaza last week that Osman-Yoloton was easily the second largest field in the world but stopped short of declaring the volume of reserves. 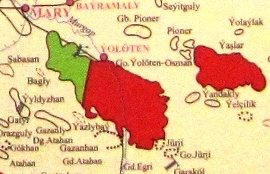 Osman-Yolotn, previously treated as two separate fields – Osman and South Yologon – is a huge sea of gas near the Turkmen border with Iran and not very far from Afghanistan.

Turkmenistan is developing the field without awarding PSAs to any foreign companies. The preferred method is to engage foreign operators for service contracts, giving them specific targets.

The first phase contracts have gone to Chinese, Emirates and Korean companies, with some sub-contracts to western producers.

If Osman-Yologn holds 23 tcm of gas, it would be second only to North Dome (also known as North Field) the giant offshore field of Qatar that hass an estimated 37 tcm of in place gas.

North Dome and South Pars are two portions of the same field shared by Qatar and Iran. The Iranian side – South Pars – carries 14.2 tcm.