The event gathered Prime Ministers and Deputy Heads of Government of Central Asian countries, as well as ministers and senior officials from over 15 EU member-states, representatives of the private sector of the EU and Central Asia, international financial institutions, international organizations and civil society. 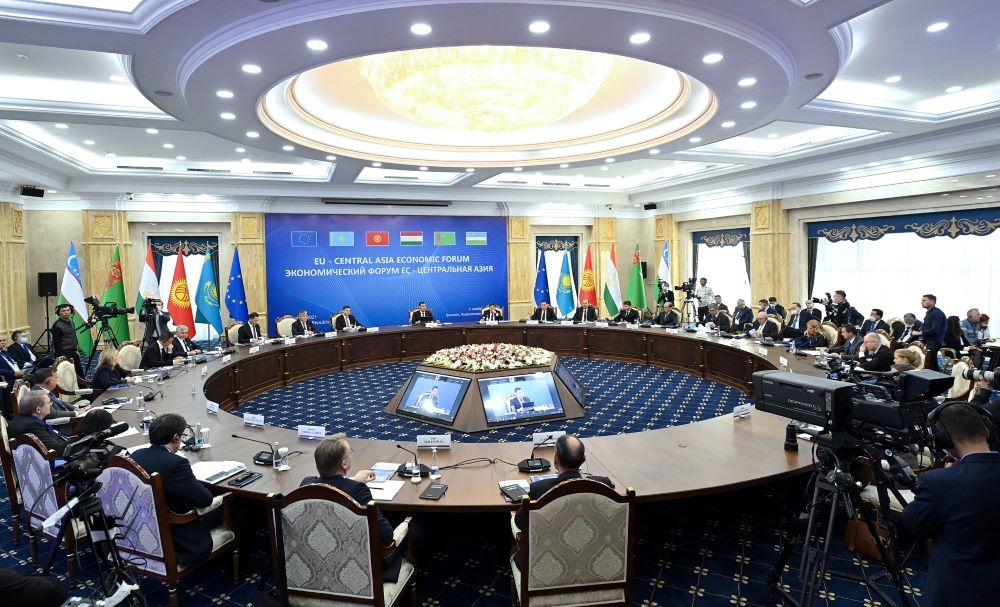 The European Union was represented by the Executive Vice-President of the European Commission and Commissioner for Trade Valdis Dombrovskis.

The President of the European Commission, Ursula von der Leyen, delivered a video message. She spoke about how cooperation between the EU and Central Asia can help the economic recovery, adding that “it can make Central Asian economies stronger, fairer and more sustainable in the long run. This is exactly what we are pushing for in Europe, too.”

The meeting was the first event within the framework of the EU Strategy for Central Asia, adopted in 2019. The forum’s discussions focused on three main areas – green economic recovery, digitalization, and improvement of the business environment.

Following the event, a joint press statement was published.

Kazakhstan will host the second economic forum “European Union-Central Asia”. The gathering will be held annually, alternately in each of the capitals of the participating countries.

President of Kyrgyzstan: we can state the beginning of a new stage of expanding cooperation between the EU and Central Asia

“The European Union Strategy for Central Asia, presented in Bishkek in 2019, allowed us to initiate the creation of a new platform for economic cooperation,” President Sadyr Zhaparov said, during his welcoming remarks.

Zhaparov pointed out that today’s significant transformations in the world open up the opportunity to build more creative relations through cooperation and harmonious partnership, mutual improvement of well-being, and the CA-EU forum has the potential to build such partnerships. 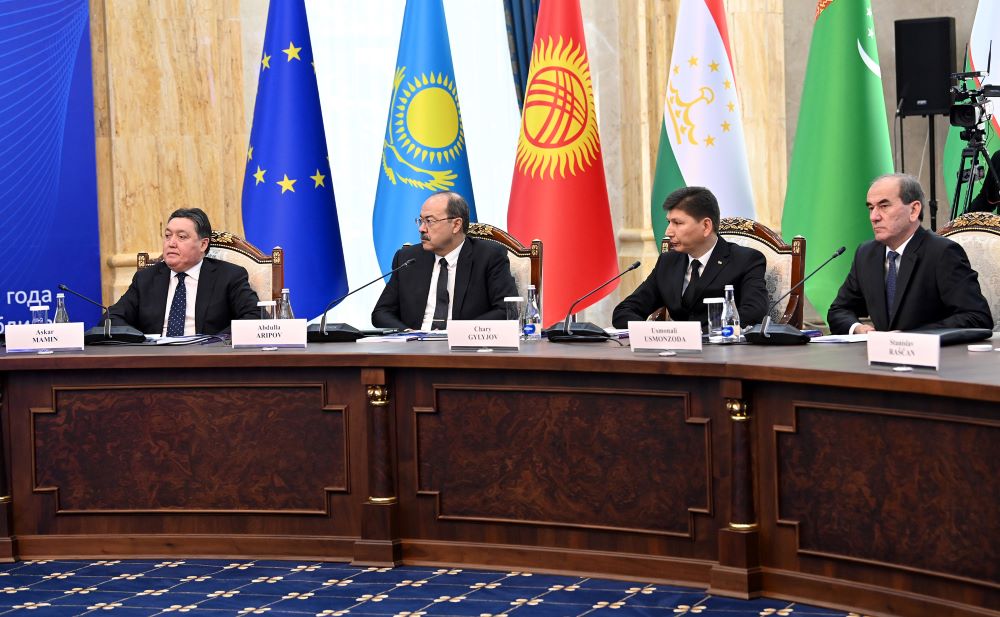 As he stressed, countries have all the necessary conditions to achieve this goal.  Both regions share the tasks of building more innovative, sustainable and inclusive national economies, have common values of freedom, justice and equality.

The President of Kyrgyzstan also underlined the growing attractiveness of the Central Asian region in terms of prospects for trade, economic and investment cooperation.

“Today we can witness the beginning of a new stage in the expansion of cooperation between the European Union and Central Asia, which inspires us with well-founded optimism. I am particularly pleased to note that this rapprochement meets the goals and objectives of the new European Union Strategy for Central Asia, approved in Bishkek in 2019,” President Zhaparov stressed.

In his speech, Dombrovskis confirmed the EU’s commitment to continue to support the efforts of the Central Asian region to overcome the socio-economic consequences of the pandemic.

He also touched upon the Afghan issue, assuring the Central Asian partners that the EU’s “aim is to work with the Central Asian countries to manage this very challenging situation.” Efforts already underway include support for displaced Afghans and host communities, migration management and measures to prevent terrorism, organized crime and human trafficking.

The European Commissioner walked through the three key topics on the forum’s agenda – green recovery, digitalization and improvement of the business environment. Here is a related excerpt from the text of his remarks:

«First, on the green recovery. The EU is convinced that the COVID-19 pandemic has opened a political window of opportunity for global climate action. Every region of the world is developing its plans for economic recovery, so we must use this opportunity to accelerate the climate-resilient transformation of our economies.

We want to work with our global partners to find the opportunities in the fight against climate change.

In this respect, we welcome the commitment of Central Asian governments to reduce emissions.

Our recovery efforts and investments need to pave the way to a more resilient and sustainable future. We owe this to the next generation.

We must avoid falling back into carbon- and resource-intensive models, and we need to ensure that alternatives to coal and fossil fuel are both attainable and affordable.

It is clear that the pattern of trade between the EU and Central Asia will evolve. Access to resources is a strategic question for Europe’s ambition to deliver our Green Deal targets. In order to reduce CO2 emissions, we will aim to import fewer carbon-intensive products, while strengthening cooperation with our partners on critical raw materials.

We know that proper financing is the key to climate action. The EU and member states’ overall contribution amounts to at least one third of total international climate finance.

I look forward to exploring possible areas of enhanced cooperation with all Central Asian countries in the transition to a greener economy. Our regional programmes and investment facilities will continue to support Central Asia’s shift to sustainable consumption and production.

We will continue to promote investment in renewable energy and solid waste management.

And we stand ready to leverage the full scope of Team Europe to help respond to water, energy and climate needs in the region.

Second, on digitalisation. We believe that further progress is imperative to increase the efficiency and transparency of the public sector and the competitiveness of the private sector.

We welcome the adoption of national digital strategies by all Central Asian states, and we urge you to continue reforms, particularly in e-governance.

Digitalisation offers not only better connectivity opportunities; it is also crucial for ensuring education for all and facilitating new job creation, especially among women and youth, and for reducing regional disparities.

Through Team Europe, we intend to support ambitious people-centred digitalisation in Central Asia.

Finally, on a better business environment.

A healthy business climate is essential for diversifying production, employment and exports. This in turn helps to make growth more robust, sustainable and inclusive.

An improved business climate can open the way for new domestic and international investors. But to be legitimate, this requires the sustained commitment of political players at the highest level.

During this visit I have met political leaders and I have heard from business stakeholders, and I am convinced there is strong potential for further cooperation in a business and investment context.

Direct financing of small and medium-sized enterprises, in combination with business advice, trade facilitation and e-commerce, will contribute to diversifying economic activity. By increasing SMEs’ access to regional and global markets, we increase their capacity to expand, become more competitive, and create jobs.

The EU has committed significant resources to Central Asia, and we will continue to do so. At the same time, let me stress that only private, market-driven investment will ensure that new initiatives are financially sustainable.”

Dombrovskis invited the Central Asian countries to benefit from the EU’s extensive experience in the field of legal regulation of exports of goods and services. The main condition for attracting private capital is stable, safe and predictable business climate. And this, in turn, requires putting in place right incentives and legal certainty.

On the occasion of the first in-person European Union-Central Asia Economic Forum with particular attention to green recovery, digitalisation and better business environment and in line with the  EU strategy on Central Asia, which focuses on promoting resilience, prosperity, and regional cooperation, the participants reaffirmed their firm commitment to strengthen the EU-Central Asia cooperation to support transformation of the economies of Central Asia into diversified and competitive private-sector driven economies that can create jobs, integrate in regional and global value chains, and provide opportunities and a level-playing field for all economic actors, as well as help Central Asian states build back better.

To that end, and taking into account the three priority areas of the Forum, participants:

On transition to a green recovery

On creation of a sound business environment

A look into the future

Participants agreed that the Forum gives an impetus for a regular follow-up and review of progress in each of the three priority areas and that close intra-regional co-operation will be imperative in the successful implementation thereof.

Recognized that the Forum created the conditions for the development of a common innovative economic response to COVID-19, as well as allowed for facilitating the implementation of the EU Strategy for Central Asia and contributed to transformation to green economy.

The report, which will be prepared following the Forum, will take note of the discussions for future occasions.

President of the Kyrgyz Republic Sadyr Zhaparov met with heads of delegations of Central Asian countries and Executive Vice-President of the European Commission Valdis Dombrovskis on the sidelines of the First Economic Forum “European Union – Central Asia”.

“It is very symbolic that the Forum has been launched this year, when all the Central Asian countries celebrated the 30th anniversary of their independence, and the European Union actively cooperated with all of us, providing support for democratic and market reforms,” he said. 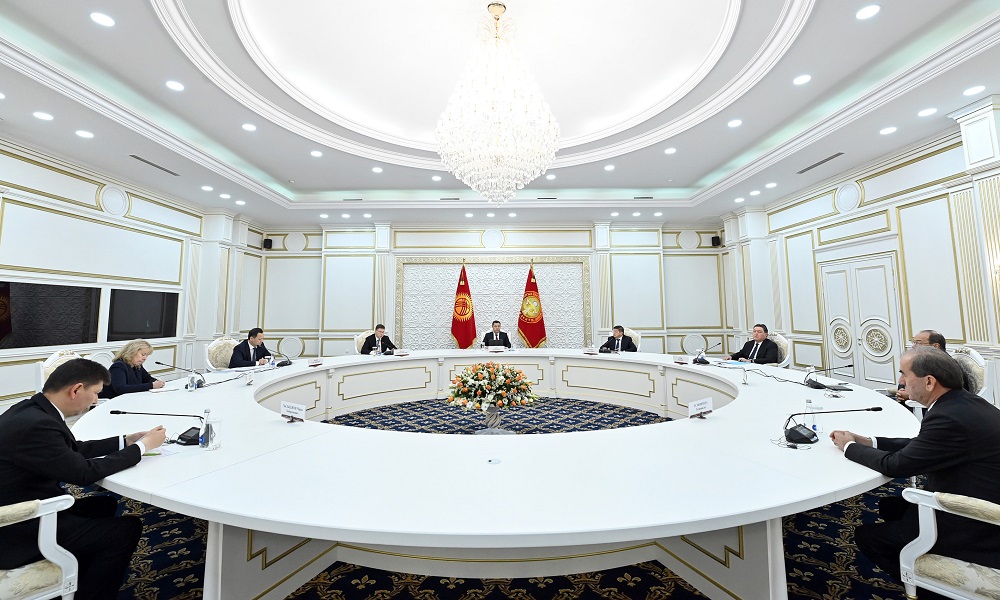 President Sadyr Zhaparov expressed hope that the forum will become an effective communication bridge between governments, the private sector, and international financial institutions and will contribute to the comprehensive development of relations in trade, investment, innovation and other areas of mutual interest.

In addition to the three topics of the forum, Zhaparov proposed for consideration another area related to strengthening human potential, especially for young people, by creating access to high-quality and affordable education.

Prime Minister of Kazakhstan Askar Mamin stressed that the Central Asian region is developing dynamically. According to him, the economic forum will be a good signal to identify the opportunities of the region.

Prime Minister of the Republic of Uzbekistan Abdulla Aripov told that the meeting will create new cooperation opportunities for business and government agencies of Central Asian countries and the European Union.

Deputy Prime Minister of Tajikistan Usmonali Usmonzoda said that the countries of Central Asia need the support of the European Union.

Deputy Chairman of the Cabinet of Ministers of Turkmenistan Chary Gylydjov expressed confidence that the economic forum will encourage the cooperation both in the regional format and with the European Union.