You are here: Home / Articles And Reports / Soleimani Assassination – View from Central Asia 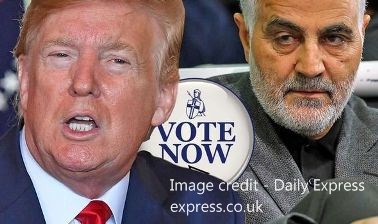 Before trying to look at some of the implications arising from the assassination of the Iranian General Soleimani, there is the need to notice something that cannot be a mere coincidence: Impeachment of an American president and strikes on Iraq.

From 16 to 19 December 1998, the USA and the UK carried out a massive bombing campaign against targets in Baghdad. The decision to bomb came just two days before the House of Representatives was to vote on the articles of impeachment against President Clinton. The impeachment fizzled out soon after.

On 3 January 2020, President Trump ordered the assassination of Soleimani when his impeachment papers were ready to be sent to the senate.

Obviously, it is a reliable method to avoid impeachment. —– Impeachment? No problems. Let’s bomb Baghdad.

Together with this, it would be interesting to look at the grooves in the brain of Trump that compel him to think in a certain way.

Here are some quotes from Trump when he was trying to prevent the reelection of Obama:

No doubt, Trump is fully convinced that attacking Iran is a surefire way to get reelected as the president of the United States. — Just happenstance, this is the election year.

Lieutenant General Qasem Soleimani was the head of the Quds Force, the wing of the IRGC (Islamic Revolutionary Guards of Iran) responsible for operations abroad. Rising quickly through the ranks, he served in this position for nearly 21 years.

He was arguably the second most powerful man in Iran, answering directly to the Supreme Leader Ayatollah Khamenei. It is the sign of his importance that Iran declared three days of official mourning on his assassination. Ayatollah Khamenei himself chaired the meeting of the national security council that was called to ponder the response on Soleimani assassination – this was the first time ever that Khamenei personally chaired a meeting of the national security council.

Soleimani was also hugely popular in Iran. A survey published in 2018 by IranPoll and the University of Maryland – one of the few considered reliable by analysts – found Soleimani had a popularity rating of 83 percent, beating President Hassan Rouhani and Foreign Minister Mohammad Javad Zarif.

Depending on their side of the dividing line, people either loved him or hated him.

For those who loved him, he was the symbol of resistance against the western imperialism, and voice of the oppressed.

For those who hated him, he was the man stirring trouble in Iraq, Yemen, Syria, Lebanon and many other parts of the world.

If, for a second, we ignore the possibility that Trump ordered the strike on Soleimani to distract the attention from his own impeachment process and increase the chance of his reelection, there is no valid argument to support the assassination of Soleimani at the time and in the manner it happened.

In targeting Soleimani, Trump has breached the unwritten law of escalation – you escalate gradually, leaving room for negotiation at every step.

He went for the highest possible target (you cannot strike the Supreme Leader or the President of Iran without attracting the wrath and hatred of the entire world). In doing so he has created plenty of room for Iran to react.

In a world where we allow for ‘proportionate retaliation,’ what would be the equivalent of Soleimani? An equally immense target or a thousand small targets?

The early indications are that the Iranian response could be geographically scattered.

For the next phase, which may start unfolding pretty soon, the terms would possibly be decided by Iran and not the USA.

This could actually be the moment to consolidate the accumulated resentment against the United States. The blood of Soleimani has already restored the unity in the Iranian nation and it has the potential to cement a viable coalition of countries to set in motion the measures to encourage the US military to leave the region.

The Iranian leadership has probably sketched the set of retaliatory measures already but some words of caution must be offered anyway.

There is anger, justifiable anger. This anger is beyond red hot; it is raging white anger. Therefore, when planning and executing the response, the decisions should come from the calm that is born of extreme anger.

The Iranian leadership would be well advised to set in motion two separate processes.

There is the need to consult with the countries that are outraged by the action of Trump and sympathetic to Iran – this is being done already. There are many countries including Russia, China, Turkey etc. that agree with the position of Iran. A joint plan should be prepared to accelerate the departure of American and other foreign armed forces from the region.

Simultaneously with planning for the departure of the American forces from the region, Iran should take steps to keep the Soleimanin Assassination in the limelight at home and abroad. There should be well-planned small steps to keep the matter simmering without letting it boil over.

Above all, Iran should take every precaution to prevent the outbreak of a conventional war.

The options with Trump are rather few unless he decides to starts a full scale war.

The options for Iranians are various.

There are direct or indirect networks of Iranian influence, a combination of ideological and military outfits, in many countries including Iraq, Syria, Yemen, Lebanon, Bahrain, and Afghanistan.

The first preference from all sides could possibly be to use the proxies. – To keep the action in someone else’s territory.

Since we are looking at the situation from Central Asia, this region is our main concern.

Whatever response may be forthcoming from Iran, some of it will quite possibly take place in Afghanistan.

Here is why and how:

Fatemiyoun Brigade (Liwa Fatemiyoun, literally Fatimid Banner) is an Afghan Shia militia. It was created in 2014 with the patronage and support of Soleimani.

The stated purpose of Fatemiyoun was to guard some holy shrines in Iraq but they fought in Syria on the side of the Assad government. They also fought in Iraq. Their exact numbers are not known but they are believed to be 10000-20000 trained fighters.

Most of them have since returned to Afghanistan. Their sympathies are, logically, with Soleimani. Because of the kind of action they have seen in Syria, they can engage in the shape of large groups for conventional battle or as small groups for guerilla warfare.

The majority of the Fatemiyoun belongs to the Bamiyan, Jowzjan, Balkh, Badakhshan, Panjshir, and Herat provinces.

We should also keep in mind that Soleimani had very good relations with the Taliban.

It is important to recall here that Soleimani played a key role in establishing contacts between the Americans and the former chief of the Taliban, Mulla Akhtar Mansour, who was also assassinated by the American drone strike on 21 May 2016 when he crossed the land border from Iran to Pakistan.

A Taliban delegation led by Mulla Abdul Salam Hanafi visited Iran in October 2019 and had a meeting with Soleimani. The delegation also met the Supreme Leader Ayatollah Khameini.

Soleimani helped patch the difference between the Taliban and the Northern Alliance to some extent.

The Fatemiyoun can be an absolute nuisance on their own and they can be the game changer if they join hands with the Taliban. Iran has the ability to make this happen.

The implications for Central Asia will depend on the shape and extent of response from Iran. The actions and reactions of the Trump administration will also determine the consequences for Central Asia.

Regardless of how the situation unfolds, there are certain steps that must be taken immediately by Central Asia:

Peace is a canvas on which one can paint stability, prosperity, happiness and everything else that the mankind desires.

Without the canvas of peace, we have nothing on which to paint our dreams. /// nCa, 6 January 2020