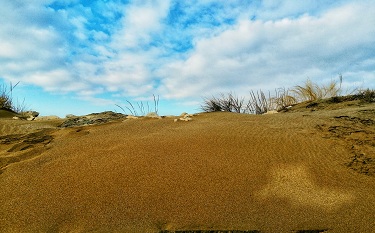 Begench Karayev, Institute of International Relations of the Ministry of Foreign Affairs of Turkmenistan

The two-week UN Global Forum on Climate Change (COP-27) with the participation of delegations from 170 countries of the world took place in the Egyptian city of Sharm el-Sheikh. One of the urgent issues on the agenda is the ways to realize the production of “clean” energy using various renewable sources.

Within the framework of the forum, 11 November was declared as Decarbonization Day, which highlights the growing urgency of containing and minimizing carbon dioxide emissions into the atmosphere. In this regard, the main attention of the forum participants was focused on the problems of technological renewal of the most energy-intensive industries, especially the oil and gas complex, metallurgy and the production of building materials, primarily cement. The report of Secretary General Antonio Guterres, sent to the delegates of the UN Second Committee on the eve of COP-27, stressed that today humanity faces the task of providing every inhabitant of the planet with access to clean energy and curbing rapid global warming. At the same time, it is believed that in order to solve this problem, it is necessary to adopt renewable energy sources. The UN Secretary-General has proposed to developed and developing countries to conclude a “Climate Solidarity Pact” that will help curb rapid global warming.

To date, 122 countries have joined the global initiative to reduce methane leakage into the atmosphere to at least 30 percent by 2030. The “Global Methane Commitment” was put forward during the 26th session of the UN Climate Conference in November 2021, held in Glasgow. President of Turkmenistan Serdar Berdimuhamedov, in his speech as the head of the delegation, expressed high interest and readiness to study the project in detail in order to consider the possibility of Turkmenistan’s participation in its implementation. It was also noted that our country plans to achieve zero growth in greenhouse gas emissions in the medium term starting from 2030, and in the long term – a significant annual reduction.

Chairman of the Halk Maslahaty of Milli Gengesh of Turkmenistan Gurbanguly Berdimuhamedov, as part of his visit to Japan on 27 September 2022, met with the heads of leading companies, as well as with the head of the Japanese sector of the Turkmen-Japanese Committee for Economic Cooperation. Speaking about the expediency of updating the Roadmap of cooperation in the field of infrastructure in Turkmenistan, Arkadag paid special attention to the relevance of studying the Japanese experience in green and hydrogen energy and the creation of modern high-tech industries focused on the production of competitive products. At the UN High-level Global Forum on Extractive Industry, Turkmenistan proposed to start developing a UN Strategy aimed at implementing measures for the development of low-carbon energy. Another proposal concerned the creation, under the auspices of the UN, of an international Roadmap for the development of hydrogen energy as one of the priority and promising areas in the global fuel and energy sector.

As stated during our delegation’s speech at the 77th session of the United Nations General Assembly, Turkmenistan is preparing to establish a Regional Center for Climate Technologies for Central Asian countries in Ashgabat. Turkmenistan’s positions on climate change adaptation and mitigation, as presented at COP-26 and considered during multilateral consultations within the framework of the Climate Conference in Bonn in June 2022, are critical in this process. The key legislative platforms in this area are the National Strategy on Climate Change, the National Strategy for the Development of Renewable Energy until 2030 and the new Law of Turkmenistan “On Renewable Energy sources”.

Against the background of the growing concern of the international community about the increasing risks to the global climate, a number of leading scientific and experimental centers of the world are paying attention to the potential of the Karakum. According to some reports, the Karakums with their total area of more than 350 thousand square kilometers exceed the territory of such states as Great Britain, Italy or Norway.

At the same time, as discussions about reducing methane emissions from oil and gas fields and combating desertification heat up, some innovative ideas give hope in the Karakums’ positive potential for energy development.

For a time, the English traveler A. Burns wrote about the Karakums: “Other deserts are insignificant compared to this boundless ocean of sands.” The famous writer Andrey Platonov wrote in his essay “Hot Arctic” that “the Turkmen people have not yet mastered their homeland: they live only on the “shores” of the sandy ocean.”

So what is the attraction of the Karakums? We are talking primarily about ordinary sand. The paradox is that the same “boundless ocean of sands” turns out to be able to generate a powerful flow of “clean” energy, or rather electricity, without resorting to ultra–expensive technologies. In this regard, it is worth looking at the experience of a number of countries of the European Union, which show a high interest in expanding scientific, technological and innovative partnership with Turkmenistan.

One of the concrete examples for the exchange of experience can be an energy facility located in the west of circumpolar Finland. In Vatajankoski, 270 km northwest of the Finnish capital Helsinki, four young enthusiastic engineers designed and commissioned a power plant where the main energy accumulating and power generating element is ordinary sand.

The Vatajankoski power plant is home to the world’s first industrial-scale sand battery. Completely enclosed in a 7 m high steel container, the battery consists of 100 tons of low-grade construction sand, two centralized heating pipes and a fan. The sand becomes a battery after it is heated to 600°C using electricity generated by wind turbines and solar panels in Finland. Renewable energy drives a resistance heater that heats the air inside the sand. Inside the battery, this hot air is circulated by a fan around the sand through heat exchange pipes. 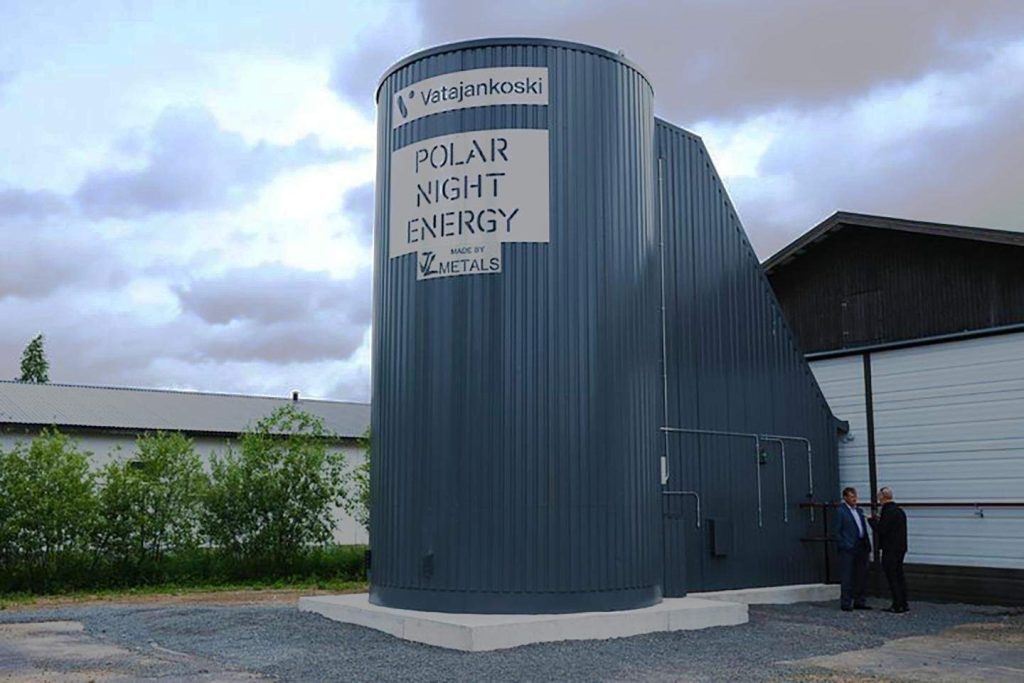 The sand is surrounded by thick insulation that keeps the temperature inside the battery at 600°C, even when it’s freezing outside. “We don’t want to lose heat – the average winter temperature in Cancaanpea is below 0°C,” says Ville Kivioja, a lead scientist at Polar Night Energy, who monitors the battery online.

The battery stores 8 MW/h of thermal energy when fully charged. When the energy demand increases, the battery discharges about 200 kW of power through heat exchange pipes: this is enough to provide heating and hot water to about 100 houses and a public swimming pool in Kankaanpää, supplementing the grid electricity. The battery is charged at night when electricity prices are lower.

According to Kivioja, this system does not require special maintenance. The company uses cheap low-quality sand, rejected by builders, instead of high-quality river sand, which is used in huge quantities for construction, leading to a global shortage. “Heat exchange pipes and sand do not wear out. The fan is the only moving part, and it is easy to replace it if necessary,” says Kivioja.

Sand is a very effective medium for keeping warm for a long period of time, conserving energy for several months. There are other advantages. Sand has a very long service life: it can heat up and cool down as many times as you want. “After a while, it will become more dense, so less space will be needed. At this point, we can add more sand,” emphasizes Kiwioja.

By studying and improving the Finnish experience, young Turkmen scientists and experimenters can go even further, using the heat of the Karakum sands to generate electricity. Publications of a number of Turkmen scientists testify to the prospects of this idea. In particular, it has been proved that Turkmenistan has not only enormous reserves of hydrocarbon raw materials, but also inexhaustible reserves of natural renewable energy. Some calculations indicate that the average annual intensity of solar radiation is 600 watts per square meter, which is comparable to about 14 billion kWh of performance from one solar photovoltaic plant with an active area of several tens of square kilometers.

According to research calculations, the territory of Turkmenistan has favorable climatic conditions for the use of solar energy. The technical potential of low-potential solar energy on the territory of our country, expressed in tons of conventional fuel, is equivalent to 1,4×109 tons of CF per year, or approximately 4×1015 kJ. The duration of solar radiation averages 2000-3000 hours per year. The amount of solar energy in the sunniest month of the year – July, per 1 square meter of horizontal surface, ranges from 6.4 to 7.5 kWh per day. The use of solar energy in these areas can be of great economic importance.

Within the framework of the UNDP/GEF project “Efficient use of energy and renewable energy sources for sustainable water management in Turkmenistan”, a solar power supply system has been installed in a number of remote villages of the Akhal province to pump and purify water in a desert area, designed to serve about 1,200 residents. The above examples indicate the effectiveness of the use of solar cells. But at the same time, the development of electricity generation using ordinary sand is just emerging as a promising direction and is waiting for new discoveries.

The desert is not only a natural “brazier”. With a deeper study, you can find out a lot of coolness from its depths, and not only at night, but also during the day. One of the promising directions for scientists and experimental engineers may be the realization of the paradoxical at first glance idea of the cooling effect of the Karakum dunes. This is due to the fact that a significant amount of moisture has accumulated on the “bottom of the sandy ocean” of the Karakum Mountains, which causes the preservation of a significant temperature difference compared to the surface of the desert.///Originally published by Neutral Turkmenistan newspaper on 19 November 2022