On 22-23 March 2022, Pakistan hosted the 48th Session of the Council of Foreign Ministers (CFM) of the Organization of Islamic Cooperation (OIC) in Islamabad.

The theme of the Ministerial Conference was: ‘Partnering for Unity, Justice and Development’.

Foreign Ministers and high-level dignitaries from OIC Member and Observer States are attended the CFM. They will also witness the Pakistan Day Parade today (23 March 2022) as Guests of Honour. 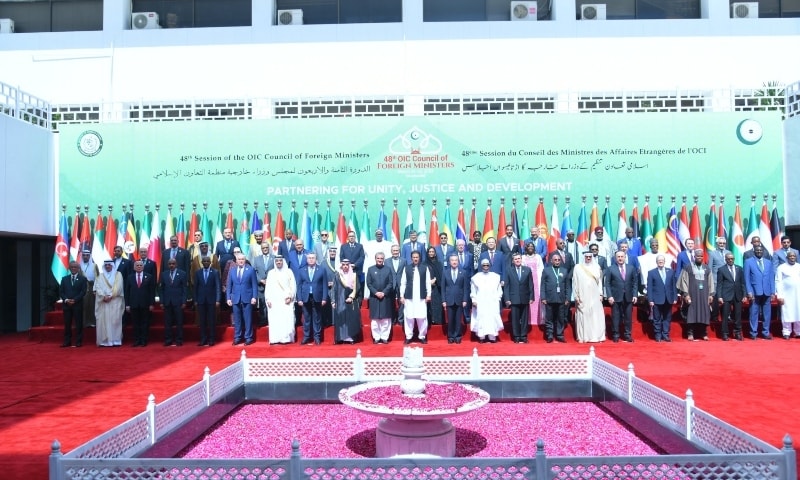 State Councilor and Foreign Minister Wang Yi of the People’s Republic of China attended as a Special Guest.

Foreign Minister of Pakistan Makhdoom Shah Mahmood Qureshi is the chairman of the CFM. 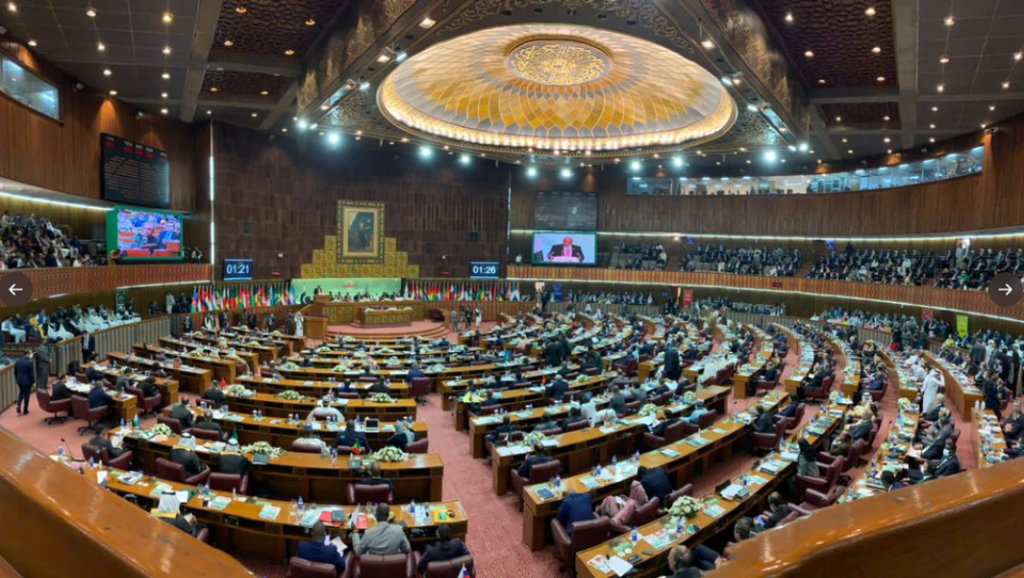 The CFM assumes special significance given the backdrop of opportunities and challenges before the Muslim world in the political, security, social and economic spheres.

Two-day session will consider and adopt over 100 resolutions on a broad range of issues, including peace and security; economic development; cultural and scientific cooperation; and humanitarian, legal, administrative and financial matters.

Prime Minister Imran Khan delivered a keynote address at the inaugural session of the CFM’s meeting.

Welcoming the guests, PM Imran said, “people of Pakistan are overjoyed on this special occasion as we are also celebrating our 75th anniversary this year.”

“I especially congratulate our OIC members because of a landmark resolution passed by the UN to mark March 15 as the International Day to Combat Islamophobia which is the day when a gunman attacked mosques in Christchurch, New Zealand.”

Holding the leadership of Muslim states responsible for the spread of Islamophobia across the world, the PM said that a false narrative was established after the 9/11 tragedy that Muslims are terrorists.

“Unfortunately, we didn’t do anything to check this wrong narrative of Islamophobia and resultantly, the man in the street in the West came to believe this.”

He said that Muslims were wrongly linked with terrorism by the world.

“One of the ideas of OIC is to protect Islamic values,” PM Imran Khan said.

He said that he believed that Islamic values have never been under threat as they are right now.

The premier said that when he became the prime minister of Pakistan, he asked the police chief about the crime chart.

“I was amazed to see that the sex crimes, child abuse and rape are the fastest growing crime in this country.”

He said that Pakistan has an increased divorce rate, rising vulgarity, which is because the more society gets permissive, it has a direct impact on the family system.

He said that one of the most important things about Islam is that it protects the family system, it has values like respecting parents and teachers.

“But [with] the culture that is coming through social media, we really need to think how we are going to protect our generations,” PM Imran Khan said.

The premier also spoke about the global situation, expressing his apprehension that the world is “headed in the wrong way”.

A new Cold War had almost started and the world could be divided into blocs, he said, stressing that unless 1.5bn Muslims took a united stand, “we will be nowhere.”

No other people had suffered as much as the people of Afghanistan, he said, adding that for the first time in 40 years, there was “no conflict” in the war-torn country. “The only danger now is through the sanctions [imposed on Afghanistan] and non-recognition”, which could cause a humanitarian crisis, he cautioned.

He said it was “extremely important” to stabilize Afghanistan because it was the “only way we are going to be able to stop international terrorism from Afghan soil”.

“Let’s not be delusional that some other country can come in and fight terrorism through drones. The only way is a stable Afghanistan government that can take care of terrorism.

“Anyone who knows the Afghan character should be cautioned, please do not push the people of Afghanistan where they feel their sovereignty is being threatened.”

The premier called on the OIC to encourage the Afghan people and include them in the international community, saying he believed the “people of Afghanistan are strong enough to evolve and go in the right direction.”

Talking about the ongoing war in Ukraine, PM Imran suggested that the OIC foreign ministers should discuss how the body could “mediate, try to bring about a ceasefire and an end to the conflict”.

If the war continued, it would have “great consequences for the world”, he cautioned. “All countries that are non-partisan are in a special position to be able to influence this conflict.”

He again repeated his suggestion that the foreign ministers discuss the issue, adding that he would also talk about it with Chinese Foreign Minister Wang Yi about how the OIC, along with China, “can influence the events in Ukraine and stop this and have some ceasefire and resolve this conflict”. [based on the reports by The News, Dawn]

On 21 March 2022 local time, when meeting the press together with Pakistani Foreign Minister Shah Mahmood Qureshi in Islamabad, State Councilor and Foreign Minister Wang Yi introduced the consideration of attending the 48th session of the Council of Foreign Ministers of the Organization of Islamic Cooperation (OIC) upon invitation.

Wang Yi said, it is the first time for me to attend the session of the OIC Council of Foreign Ministers upon invitation in my capacity as Chinese Foreign Minister. This fully reflects the strong desire of China and Islamic countries to further deepen cooperation.

Wang Yi said, the theme of this session of the OIC Council of Foreign Ministers is “Partnering for Unity, Justice and Development”, which is of special significance amid the current international situation. The four keywords are precisely the goals of China’s attendance at the session and the consensus between China and our Muslim friends.

China is here for “partnering”. China and the Islamic world have profound historical ties, seek similar values and share historical missions. In the great process of the revival of the two great civilizations, we are ready to walk together with our friends in Islamic countries through thick and thin with mutual understanding and mutual support.

China is here for “justice”. Today’s world is not peaceful, and the international system and the basic norms governing international relations are facing severe challenges. We are ready to work with our friends in the Islamic world to act on true multilateralism, safeguard all countries’ sovereignty, independence and national dignity, uphold the UN Charter and purposes, and champion fairness and justice in international relations.

China is here for “development”. The cooperation between China and Islamic countries enjoys huge potential, complementary advantages and broad space. We are ready to work with our friends to foster high-quality Belt and Road cooperation and accelerate respective development and revitalization, thus making due contributions to promoting the recovery and growth of the world economy. ///MFA China

He reiterated the need to adopt a common stance against the challenges that the Muslim world faces.

“The theme of our meeting is ‘Partnership for Unity, Justice and Development.’ This theme should not be just a slogan, it should be filled with concrete steps. Because we only succeed when we are united,” he said.

Çavuşoğlu also called on the Muslim world to rediscover “the 14 centuries-old culture, art, civilization, science and wisdom of Islam”. “The classical centers of our civilizations, such as Jerusalem, Damascus, Aleppo and Kabul were destroyed. They lost their identity. The names of many Islamic countries became associated with war, terror, suffering and massacres,” he said.

On 22 March 2022, Minister of foreign affairs of Turkmenistan Rashid Meredov had separate bilateral meetings with Turkish and Pakistani counterparts.

“Started our day in Islamabad, meeting with FM Rashid Meredov of Turkmenistan on the margins of the meeting of the Ministers of Foreign Affairs of the Organization of Islamic Cooperation,” Cavusoglu tweeted.

During the meeting with minister Qureshi, the sides exchanged views on energy and connectivity projects between Pakistan and Turkmenistan, which have the potential to transform the region into a hub of regional trade.

Foreign Minister Qureshi highlighted Pakistan’s “Vision Central Asia” policy, and its commitment to enhancing engagement with Central Asian countries for building a result-oriented, sustainable and long-term partnership. He stressed the need for greater cooperation between Pakistan and Turkmenistan in trade and investment, enhanced connectivity, and people-to-people exchanges.

Foreign Minister Qureshi highlighted that peace and stability in Afghanistan was essential for realizing the goals of greater economic integration and regional connectivity. He stressed the importance of constructive engagement by the international community, including regional countries, for meeting the immediate humanitarian and economic needs of the Afghan people.

The Secretary-General of the Organization of Islamic Cooperation H.E Hissein Ibrahim Taha and the President of the Islamic Development Bank (IsDB) Group President, H.E. Dr. Muhammad Al Jasser, signed on 21 March 2022, in Islamabad, the establishing charter of the Afghanistan Humanitarian Trust Fund, on the sidelines of the ongoing 48th session of the Council of Foreign Ministers of the Organization of Islamic Cooperation.

This signing ceremony is an important milestone on the operationalization of the Afghanistan Humanitarian Trust Fund, as requested by the OIC Council of Foreign Ministers, during its 17th Extraordinary session held on December 19, 2021, in Islamabad.

Dr. Al Jasser underscored the Islamic Development Bank’s readiness and commitment to operationalizing the fund and its endeavor to work closely with all our partners and the international community, to fully coordinate and synchronize all efforts under the Fund. In this regard, he stated that the Bank has undertaken all necessary measures to finalize the process of establishing and operationalizing the Fund including the signing of its Charter and opening a Bank account to receive contributions.

The President further appealed for the generous support from all countries, international, regional, and bilateral organizations, private sector, philanthropists to announce their pledges to the fund.