You are here: Home / Articles And Reports / Turkic countries reaffirmed their firm support and solidarity with Kazakhstan

On 11 January 2022, the Council of Foreign Ministers of the Organization of Turkic States held an extraordinary meeting via videoconference on 11 January 2022 to discuss the recent developments in Kazakhstan.

The Meeting started with observation of a minute of silence to commemorate memories of those who lost their lives during the unrest.

Deputy Prime Minister and Minister of Foreign Affairs of Kazakhstan Mukhtar Tileuberdi spoke on the current situation in his country. 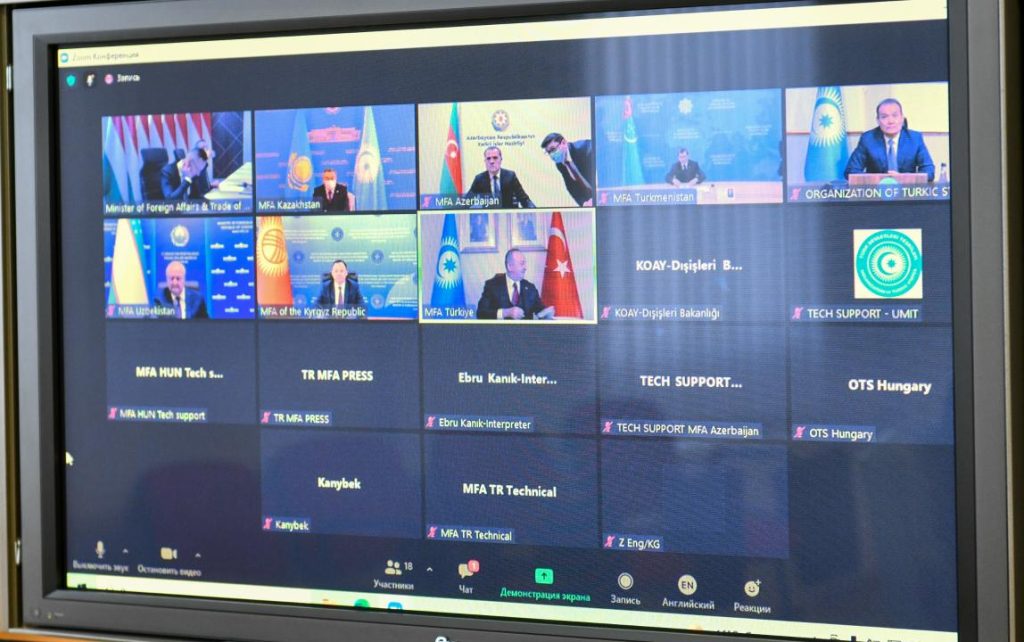 The ministers and the Secretary General delivered their Statements underlining the importance of the peace and stability in Kazakhstan and supported the counter-terrorist operations of the Kazakhstan Government against those who aimed to undermine the constitutional order.

The meeting has adopted the Statement on the situation in Kazakhstan.

Meredov, in particular, emphasized Turkmenistan’s readiness to begin exporting natural gas to Kazakhstan in March of this year.

Turkmenistan is also willing to deliver the necessary volume of electricity to Kazakhstan.

Turkmenistan is interested in the speedy normalization of the situation in this country, in the further stable socio-political and socio-economic development of Kazakhstan, Meredov stressed, speaking about the recent events.

The firm belief was expressed that qualities such as wisdom, foresight, and deep respect for the ancient Kazakh people’s customs and traditions will serve as a solid foundation for resolving all emerging constitutional and legal issues in accordance with international norms.

The foreign minister noted the importance of the OTS Summit held in Istanbul on November 12, 2021.

He quoted the President of Turkmenistan Gurbanguly Berdimuhamedov as saying: “The peoples of our countries share common values with long-standing historical roots aimed at ensuring peace, stability and mutual understanding.”

The minister stated that based on this fundamental approach, Turkmenistan will continue to work closely with all Organization Member States to maintain long-term peace and security, ensuring economic, social, and humanitarian development in the region’s countries.

The Council of Foreign Ministers of the Organization of Turkic States held an extraordinary videoconference meeting on 11 January 2022 to discuss the recent developments in Kazakhstan, upon the invitation of H.E. Mevlüt Çavuşoğlu, Minister of Foreign Affairs of the Republic of Türkiye.

Reaffirming the brotherly ties between the peoples of the Members and Observers of the Organization of Turkic States,

Referring to the joint objective, as stipulated in the Nakhchivan Agreement on the Establishment of the Cooperation Council of Turkic Speaking States of 3 October 2009, to contribute to strengthening peace, ensuring security and stability in the region and in the world as a whole,

Deeming it a responsibility to stand by the people and Government of Kazakhstan when and as needed and in this regard referring to the statement of the Organization of Turkic States of 6 January 2022,

Hearing the assessment of H.E. Mukhtar Tileuberdi, Deputy Prime Minister and Minister of Foreign Affairs of the Republic of Kazakhstan concerning the recent developments and current state of play in Kazakhstan and following extensive exchange of views on the subject,

The Council of Foreign Ministers of the Organization of Turkic States has:

The Council of Foreign Ministers of the Organization of Turkic States agreed to remain in close cooperation and consultation in this regard. /// nCa, 12 January 2022