You are here: Home / Articles And Reports / More than just shipping: New UN report highlights how trade can play a pivotal role in addressing climate change 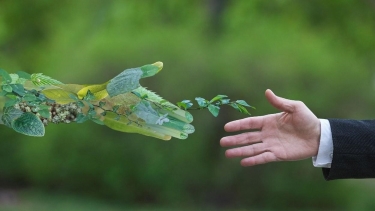 A new United Nations report has underscored an urgent need for economies in the Asia-Pacific region to reduce greenhouse gas (GHG) emissions, including to maintain their trade competitiveness as carbon taxes at borders become more likely.

“As key trade partners consider putting border taxes in place on carbon, there are strong concerns on the effects on the developing countries since many economies in the region are at risk of being pushed out of key markets,” said Armida Salsiah Alisjahbana, United Nations Under-Secretary General and Executive Secretary of ESCAP. She added that the roll-out of COVID-19 recovery packages could provide opportunities to invest in low-carbon technologies and sectors; opportunities that should not be missed considering the urgency for action.

The Asia-Pacific region is now the largest emitter of GHGs in absolute terms. However, the Asia-Pacific Trade and Investment Report 2021 (APTIR) reveals significant room for all economies in the region to make their trade and investment more climate smart.

Barriers to trade in environmental goods are more prevalent than barriers to trade in carbon-intensive fossil fuels. Wasteful and regressive fossil fuel subsidies also continue to contribute to GHG emissions in the region. According to the report, their timely abolishment and replacement with more targeted support policies could provide much-needed finance for social and environmental policies in addition to reducing emissions.

In a message to the report launch event, Tipu Munshi, Honourable Minister of Commerce, Bangladesh, said: “To me, the recommendations in the report, like, trade liberalization in climate smart and other environmental goods, phasing out of fossil-fuel subsidies, private sector initiatives, transition to climate friendly transportation, incorporation of climate issues in RTAs, carbon pricing and carbon border adjustment taxes are very much befitting given the crises we are facing.”

A joint message from Hon Damien O’Connor, New Zealand’s Minister for Trade and Export Growth and Hon James Shaw, New Zealand’s Minister of Climate Change emphasized that: “One of the most substantial roadblocks in the way of cutting emissions is fusil fuel subsides. Subsidies are a trade issue. Trade laws can be a vehicle for driving action on climate change.”

“The links between trade, investment and climate change are complex. The key is to ensure that the positive effects of trade and investment are maximized, such as by promoting trade and investment in renewable energy and low-carbon technologies, while minimizing the adverse effects, like by digitalizing trade and transport systems,” said Rebeca Grynspan, Secretary-General of the United Nations Conference on Trade and Development.

Climate pledges by several countries in the Asia-Pacific region need to be underpinned by policies and measures to drive the transformation towards lower carbon economies, including in the private sector. Some 16 million new jobs would be created in clean energy, energy efficiency, engineering, manufacturing and construction industries, more than compensating for the estimated loss of five million jobs by downscaling industries.

While implementing climate-smart policies comes at a significant cost, particularly for carbon-intensive sectors and economies, the cost of inaction is far greater with some estimates as high as $792 trillion by 2100 if the Paris Agreement targets are not met.

The Asia-Pacific Trade and Investment Report 2021 was jointly launched today by the ESCAP, UNCTAD and the United Nations Environment Programme at the World Trade Organization Environment Week. This is the first report to examine the impact of upcoming border carbon adjustment mechanisms affecting economies in the Asia-Pacific region. It is also the first time an index – the Climate-smart trade and Investment Index (SMARTII) – was constructed to evaluate the degree to which economies in the region had climate-smart trade and investment policies. /// UNESCAP, 11 Oct