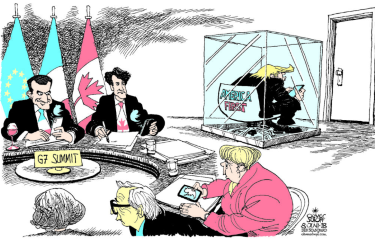 The decisions taken in a simulated reality can backfire when acted upon in actual reality.

The simulated reality usually occurs in the congregations of like-minded people such as the recently held G7 and NATO summits.

The actual reality is what prevails in a society or a country; it is dynamic, vibrant, and somewhat unpredictable.

Inventing the ludicrous terms such as B3W, rules-based world, ethical infrastructure with a straight face is the product of simulated reality. It seems so very profound. The authors of such absurdities pat each other while ‘power networking’ in that hall.

Returning to their countries and trying to sell such novelties to their own people is when the simulated reality collides with the actual reality.

There is the lacuna – the generation that gathered at the G7 and NATO summits is not the generation that represents or understands the bulk of their own societies, much less the global citizenry that is the product of social media and electronic connectivity.

When they return to their own countries and ask their voters to get angry at China and Russia, it is a non-starter.

For them, China is smartphones, electric vehicles, affordable gadgets and electronics, exotic food, and mail order dresses that are sometimes two sizes too small.

They view China mainly as a source of affordable items that make life easy.

For them China is TikTok and funny videos.

Their contact with the Chinese people is mostly limited to the Chinese diaspora in their own countries – generally called Asians – and the Chinese students. They find them likeable and friendly.

Usually there is the distance of a generation or a generation and a half between the people in authority and the youth.

Each new generation is more global and quite allergic to confrontational politics.

The generational transition is visible everywhere, even within the ranks of NATO. Compared to entry level officials of NATO some 20 years ago, the younger generation of today feels rather uncomfortable defending the policies of their elders.

Another example of this generational evolution is OSCE. About 20 years ago OSCE was NATO in civvies, eager to interfere in the internal affairs of the host country, enthusiastic about ramming a rather poor model of democracy down the throat of everyone. The newer generation of officers in OSCE is responsive to the needs and sensitivities of the host country.

For youth, the anger at China and Russia is misplaced. It doesn’t appeal to their sense of fairness.

In the alternate universe, the distance is meaningless to the youth. They are in long distance relationships, they have a circle of friends that stretches halfway across the globe, and they know more about the lives of people in far-away lands than the people on their own streets.

They are connected globally and disconnected from the people who pretend to represent them at forums such as G7 and NATO summit.

All of this zips together and saps the pool of goodwill a country or a nation may have acquired over the years.

It is important to understand that goodwill is the product of reputation and reputation is something that is gained or lost on the basis of perceptions.

The reputation, and the resulting goodwill, is what create the space for a country to act globally. If power alone were adequate without goodwill, Uncle Sam would not have deserted the Bagram base in the middle of night.

It is important for the American allies to understand that the social media is a borderless territory. Opinions are shaped and shredded in no time at all. Perceptions are acquired and discarded without leaving home. The screen of the smartphone is the king and that is where the dinosaurs that gathered in the G7 and NATO summits are the butt of jokes.

There is a limit to how far the shoulder-to-shoulder mantra can go without causing internal injuries. Jumping together into the abyss is a romantic idea but it doesn’t have much use in the real life.

To put it in rather extreme terms, the USA is heading to the Hades in a hand basket. The signs are there already: anger at someone else for its own blunders; sheer arrogance that has impaired the mental faculties; overestimating itself and underestimating everyone else; instead of picking speed to overtake the competition, trying to tilt the playing field to win the race; equipped with three loud mouths, one where everyone else has a mouth and two where the other people have ears, etc.

It is time for the American allies to decide whether they want to be where the USA will be tomorrow. /// nCa, 15 July 2021