President Berdimuhamedov flew by helicopter on Thursday, 20 May 2021, to the Ovadan-Depe area of Ahal province to visit the GTL (gas to liquid) plant that uses the natural gas as raw material to produce Euro 5-compliant gasoline and several other products.

The president spoke to the specialists working at the plant and got thoroughly acquainted with the production process. 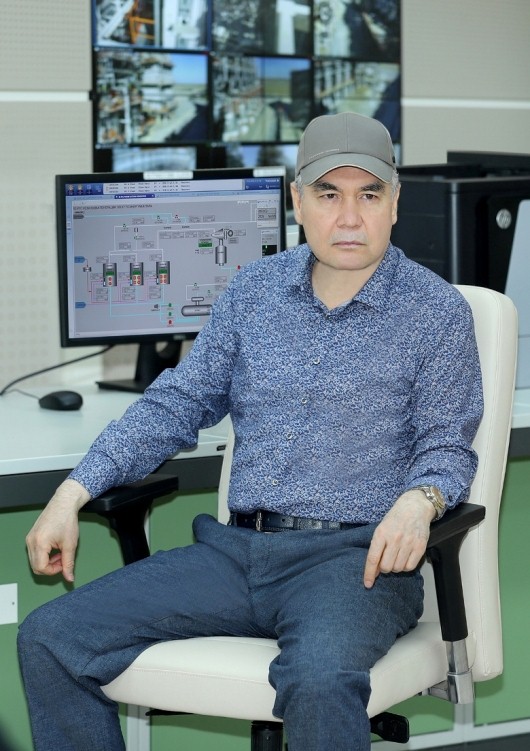 He conducted a site meeting with the leadership of the oil and gas complex including the rectors of the educational establishments of the sector.

Here is the relevant portion from the TDH report:

The director of the Akhal gasoline plant D. Sapbaev reported on the state of affairs at the enterprise. As noted, the entire production operates in accordance with the established requirements.

1,800 tons of gasoline are produced daily, these high-quality products that meet environmental requirements are supplied to Afghanistan and European countries on the basis of signed contracts.

In addition, it was reported about the ongoing work on the construction of the second stage of the plant. At the same time, it was noted that when preparing the project, it would be advisable to introduce innovations, a digital system in order to improve the production process.

After hearing the report, the President pointed out that it is necessary to constantly monitor the high quality of products. Taking into account the growing demand in the world for environmentally friendly gasoline, it is necessary to expand sales markets in foreign countries, the head of Turkmenistan said and gave relevant instructions.

State Minister – Chairman of the Türkmengaz State Concern B. Amanov reported on the issues of increasing production, processing and export of natural gas.

In addition, it was reported on the progress of work on the development of the Galkynyş gas field, carried out jointly with reliable foreign partners.

Head of State Gurbanguly Berdimuhamedov noted that the effective solution of problems related to the processing of natural gas, increasing the volume of its supplies abroad, along with strengthening the country’s economy, will ensure the effective nature of interregional cooperation. That is why the work carried out in this direction should be based on advanced experience and high achievements of science, as well as innovative technologies, and gave a number of instructions.

Then the Chairman of the State Concern “Türkmenhimiýa” N. Nyyazlyev spoke, who noted that as a result of the policy of development and diversification of the national economy, including the chemical industry, the infrastructure of this segment is improving every year.

Our country is not limited only to the export of hydrocarbon resources, but also processes raw materials, producing chemical products that are in high demand on the world market. In recent years alone, such large-scale projects have been implemented as the construction of new production complexes “Marykarbamid”, “Garabogazkarbamid”, a polymer plant in Kiyanly and a plant for the production of gasoline from natural gas in Ahal. All these enterprises are equipped with innovative technologies and are considered environmentally friendly industries.

Along with the already established production of ammonia, urea, polyethylene and polypropylene, gasoline, our country has huge opportunities for creating new capacities for the processing of hydrocarbon resources, including the production of methanol, polyvinyl chloride, polyvinyl acetate, formaldehyde and hydrogen.

In the field of deep processing of natural gas today, three main areas can be distinguished. In particular, synthetic gas can be used to produce synthetic ammonia and nitrogen fertilizers. The second direction is the production of methanol, which is widely used in the manufacture of various formaldehyde resins, plastics, artificial fibers, and other products. Having obtained propane-butane mixtures, they can be used to produce a whole range of products: naphthene and synthetic rubber, high-quality fuel, polyethylene and polypropylene using the technology of converting natural gas into liquefied gas.

In addition, the expediency was noted to pay special attention to the possibilities of establishing and broadly studying the production of hydrogen, which is being developed as a strategy for the “fuel of the future” in the developed countries of the world.

Focusing on the important tasks set for the State Concern “Türkmenhimiýa”, the head of Turkmenistan pointed out the need for further processing of the country’s rich hydrocarbon resources.

Further, the rector of the Yagshigeldy Kakaev International University of Oil and Gas, B. Atamanov, informed about the ongoing comprehensive work to train highly qualified specialists for modern enterprises of the oil and gas industry.

In this regard, relevant subjects were introduced into the curricula of this higher educational institution, including the study of equipment and the latest technologies used at the polymer plant in Kiyanly, the carbamide plant at Garabogaz, the plant for the production of gasoline from gas in the Akhal velayat, as well as the Garlyk potash ore mining and processing complex, and curricula were re-drawn.

Also, taking into account the technologies used at the plant for the production of synthetic fuel, the training of specialists in the specialty “Chemical technology of oil and gas processing” for the oil and gas industry, the chemical industry, etc., bachelors studying in English in the direction of “Chemical technology”, and also students majoring in Standardization and Certification and Environmental Protection and Rational Use of Natural Resources. In addition, students, in accordance with the specialties they receive, are sent to large processing complexes for practical training.

As the rector said, from the moment the plant for the production of gasoline from gas in Akhal was launched and until today, graduates of this higher educational institution have been sent to this large complex. It was also reported about the work carried out in connection with the environmental features of gas chemical production.

In turn, the director of the Scientific Research Institute of Natural Gas of the State Concern “Türkmengaz” B. Pirnyyazov informed that modern technological developments are used in the activities of the Concern.

Currently, the factories of the Galkynyş gas field are conducting scientific research to improve the quality of the commercial “blue fuel”.

The Institute also made a technical and economic analysis of the construction of gas chemical plants. The results were sent to the State Concern “Türkmengaz”.

Along with this, information was sounded that specialists from the Scientific Research Institute of Natural Gas are carrying out a preliminary technical, economic and scientific assessment of the construction of a facility for the production of 6 thousand tons of isobutane per year at a gasoline plant located in Akhal, as well as a new modern gas chemical complex in seaside region.

Among the major investment projects to increase the raw material base of the industry, President Gurbanguly Berdimuhamedov highlighted the industrial development of the super-giant Galkynyş field, the resources of which, together with the Ýaşlar and Garaköl fields, are estimated at 27.4 trillion cubic meters.

Our country, which is one of the world leaders in natural gas reserves, is one of the producers of environmentally friendly fuels in the Eurasian space. The global demand for electricity is constantly growing, especially for natural gas, which is an economical and environmentally friendly fuel. The electric power industry provides gas processing clusters and the petrochemical industry with “blue fuel”, which produce a wide range of products, in particular, household and industrial goods, mineral fertilizers, etc. Along with this, the consumption of natural gas in the housing and communal and transport sectors will also grow.

At the same time, in the future, emphasis will be placed on the development of renewable energy sources, as well as hydrogen energy, innovations in the field of energy-saving technologies and digitalization of the fuel and energy complex, which is due to the growing concern of the world community with climate change problems. Based on this, the head of state ordered to increase the pace of work carried out in this direction.

Further, President Gurbanguly Berdimuhamedov gave the floor to Deputy Chairman of the Cabinet of Ministers Sh.Abdrakhmanov, who reported on the state of affairs in the fuel and energy complex of the country and the upcoming work. As the Deputy Prime Minister noted, the opening of this plant, which took place in June 2019 with the participation of the head of state, launched a chain of new scientific and technological initiatives.

The fuel and energy complex occupies a key place in the national economy, since it is in it that colossal resource, industrial and scientific potential is concentrated, President Gurbanguly Berdimuhamedov emphasized. The introduction of advanced achievements in the field of science and technology in this segment will not only ensure its intensive development, but will also strengthen the position of the Turkmen state in the global energy market.

In this context, the importance of building a unique and the only plant in the world for the production of environmentally friendly synthetic gasoline from natural gas, which will significantly affect the increase in the export potential of our country, was emphasized.

The head of state ordered to keep under constant control the activities of the complex and urged to focus on addressing issues related to strengthening the human resources of industrial enterprises in the industry through the training of highly qualified specialists.

President Gurbanguly Berdimuhamedov emphasized the need for systematic modernization of production through the introduction of advanced scientific and technological developments.

Expressing confidence that those present will make a worthy contribution to solving the tasks set for the development of the industry, the head of state wished them success in their work and left the scene. /// nCa, 21 May 2021