You are here: Home / Articles And Reports / DURING THE INTERNATIONAL CONFERENCE, THE IMPORTANCE OF THE PERMANENT NEUTRALITY OF TURKMENISTAN WAS HIGHLIGHTED

Developing the theme of the current forum, the UN Secretary General’s Special Representative for Central Asia, the Head of the UN Regional Center for Preventive Diplomacy for Central Asia Natalya Gherman, the Head of the OSCE Center in Ashgabat Natalya Drozd, as well as the Ambassador Extraordinary and Plenipotentiary of the Russian Federation to Turkmenistan Alexander Blokhin highlighted, that Turkmenistan is invariably committed to the principles of the legal status of permanent neutrality and always in practice proves that Neutrality, peacefulness and good-neighborliness have been and remain the main basis of its foreign policy. 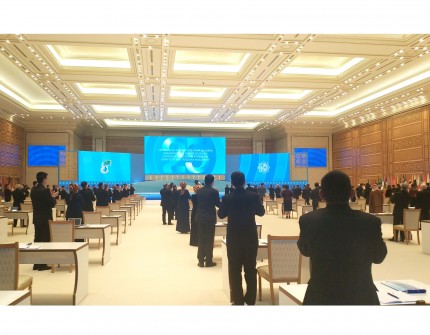 In her speech, Natalya Gherman, Special Representative of the UN Secretary General for Central Asia, Head of the UN Regional Center for Preventive Diplomacy for Central Asia, noted that Turkmenistan gives priority attention to promoting the peacekeeping agenda, establishing multifaceted cooperation in preventing conflicts and contradictions, neutralizing threats and challenges, establishing a solid foundation for peace, security and development.

As is known, the UN Security Council, assessing the results of the activities of the Regional Center, has repeatedly noted the importance of preventive diplomacy and supported the efforts of this structure in Central Asia.

At the current 75th session of the UN General Assembly, Turkmenistan is taking the initiative to adopt a resolution on strengthening the role of the Regional Center.

The head of the Center for Security and Cooperation in Europe in Ashgabat, Ambassador Natalya Drozd, noted that in the context of Turkmenistan’s partnership with international organizations, the long-term and effective interaction in political, economic, humanitarian and environmental vectors should be emphasized.

In his speech at the conference, Ambassador Extraordinary and Plenipotentiary of the Russian Federation to Turkmenistan Alexander Blokhin told the participants about the cooperation between Turkmenistan and the Russian Federation, as well as the role of the status of permanent neutrality in promoting peace, stability and sustainable development at the regional and international levels.

It was noted that at present relations between Turkmenistan and the Russian Federation acquire a qualitatively new content and demonstrate a great potential for development, taking into account the modern realities and interests of the two countries. Turkmenistan and Russia have close or coinciding approaches to solving many international problems. The existing level of political dialogue at the highest level creates the basis for cooperation across the entire spectrum of bilateral interaction.

The President of Turkmenistan called for continuing joint work to strengthen peace, security and stability, to achieve the goals of sustainable development for the benefit of all countries and peoples.