This year, in Kazakhstan and around the world, the 1150th anniversary of the great philosopher of the East Abu Nasr al-Farabi is celebrated. This event is included in the UNESCO Anniversary Calendar and is widely celebrated at international cultural platforms with the support of ISESCO, OIC, TURKSOY and other authoritative organizations. Celebration of the jubilee of al-Farabi on such a scale gives a powerful impetus to the popularization, study and comprehension among the younger generation and the international community of the creative heritage of the great scientist who made an invaluable contribution to the development of world science and civilization.

The great thinker of the East al-Farabi was born in 870 in the Farab area, which was located in the area where the Arys River flows into the Syr Darya on the territory of the modern Otyrar district in southern Kazakhstan. The Otyrar oasis, located at the junction of a nomadic steppe with a sedentary agricultural population, at a fork in the most important trade routes after the Arab conquest, became known as the Farab district.

Al-Farabi’s full name is Abu Nasr Muhammad ibn Muhammad ibn Tarkhan ibn Uzlag al-Farabi at-Turki. The word “Tarkhan” in his name indicates that the philosopher belongs to a privileged family, and the phrase “at-Türki” shows that al-Farabi was a Turkic by origin. Some biographical data about al-Farabi have come down to us thanks to the writings of medieval authors: “Sources of information about the classes of doctors” Ibn Abi-Usaybia, “Reports of scientists and wise men”, the author of which is al-Kifti and sons of time ”Ibn Khallikan.

Historians suggest that al-Farabi lived in Otyrar until the age of twenty. Here he began his journey to the knowledge of the world. In his youth, al-Farabi had the opportunity to get acquainted with the treasures of the richest Otyrar library at that time, which was considered the second in the world in terms of the number of books and manuscripts after the famous library of Alexandria. Probably since then an unquenchable thirst for knowledge has awakened in him.

As a twenty-year-old boy, al-Farabi leaves his native land and travels a lot in search of new knowledge. There is information that before his departure from Central Asia, al-Farabi studied and worked for some time in Shash (Tashkent), Samarkand, Bukhara, and Merv.

To continue his education, the philosopher went to Baghdad, the capital and cultural center of the Arab Caliphate. On the way, he visited many cities of Iran: Isfahan, Hamadan, Rey (Tehran). In Baghdad, which was the center of attraction for intellectuals of that time, al-Farabi began to study various branches of science and languages. It was here that the famous school of translators worked, who translated and commented on the works of Plato, Aristotle, Galen, Euclid. Al-Farabi soon became a leading scholar known throughout the Arab Caliphate.

In 941, the great thinker settled in Damascus, where he spent the rest of his life doing scientific work. In his declining years, the scientist visited Egypt, and returning to Damascus at the end of the 940s, he did not leave this city until his death. Al-Farabi died in 950 at the age of eighty and was buried in the “cemetery of the kings” Bab-as-Sagir in Damascus.

Al-Farabi on the currency of Kazakhstan

Al-Farabi left behind a rich cultural heritage. His works (about 160 treatises) formed the basis of medieval philosophy and the philosophy of the Renaissance. His great merit was the Europeanization of science in the Arab world and the systematization of scientific knowledge. According to some reports, al-Farabi has mastered 70 languages ​​in his entire life. The works of the scientist have been preserved in Turkic, Arabic, Greek, Persian.

Philosophy of the great thinker

Al-Farabi’s knowledge was universal. He was interested in both the humanities and natural sciences. All his life al-Farabi devoted to the study of the Aristotelian concept of reasoning – formal logic, Platonic ontology and epistemology – the theory of being and cognition. He is recognized as the founder of Eastern Peripatetism, a philosophical system that grew up on Aristotelian teachings. Therefore, he is often called the “Second Teacher” (after Aristotle). Al-Farabi created a whole encyclopedic system. His treatises covered all the branches of knowledge known at that time: politics, psychology, ethics, natural science, aesthetics, logic and philosophy.

The result of al-Farabi’s many-sided scientific research was the treatise “On the classification of sciences”, in which the sciences of that time were listed in a strict order, the subject of each research was determined. The scientist proposed this system as the basis of higher education. At the top of the sciences, in his opinion, is linguistics (writing, reading and poetics), followed by logic, mathematics, physics, metaphysics, politics. According to contemporaries, “no one has written anything like this before.” In the XII century, The “Classification of Sciences” has been translated into Latin twice.

A number of al-Farabi’s socio-ethical treatises are devoted to the concept of an ideal society, state and ruler: “A treatise on the views of the inhabitants of a virtuous city”, “On achieving happiness”, “Pointing the paths to happiness”, “Civil policy”, peaceful life “,” Book of the study of society “, “On virtuous morals.” Based on the political and ethical ideas of Greek philosophers and using the social ideas of the ancient East, al-Farabi developed a coherent theory of social structure.

According to the teachings of al-Farabi, the rulers-philosophers are at the head of the virtuous cities, acting simultaneously in the role of the leaders of the religious community. The ruler must be a person who has comprehended the depths of knowledge and renounced the temptations of being, material values. Al-Farabi believed that every person from birth is predisposed to virtue, the destiny of a mentor is to discover this quality in a person. In virtuous cities, they strive to achieve true happiness for all residents; good and justice reign, injustice and evil are condemned. Al-Farabi contrasted the virtuous cities with ignorant cities, the rulers and residents of which have no idea about true happiness and do not strive for it, but pay attention only to bodily health, pleasures and wealth. 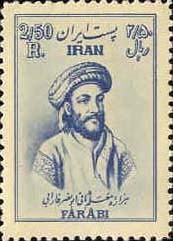 Al-Farabi on the postage stamp of Iran

Al-Farabi contributed to the study of music and poetry. His main works in this area are “Big Book on Music”, “Book on the Classification of Rhythms”, “On the Art of Poetry”, “Treatise on the canons of the art of poetry”. In the formation of al-Farabi’s aesthetic thinking, the Turkic fine arts and folklore played a role. In the Middle Ages, on the territory of Central Asia, there was an accumulation of new values ​​in music, and a special branch of art with such specific genres as kui, mukams, dastans was finally formed.

In the “Big Book of Music” al-Farabi gives a detailed definition of music, reveals its categories, describes the elements from which a piece of music is formed. Al-Farabi grouped all musical instruments known at that time according to the method of sound extraction. Thus, he laid the foundation for the science of musical instruments, which later developed in the East and in Europe. Music in the classification of sciences of the scientist is classified as a mathematical sciences. At the same time, he did not exclude the attitude to it as to artistic creation, designed to emotionally influence the listener. Scientists suggest that it was al-Farabi who was the inventor of the nine-stringed or four-stringed dombra “Ut”.

In 1930-1935. the famous French orientalist Rudolph d’Erlange translated and published in Paris a two-volume French translation of the Big Book of Music, which was a great contribution to the study of al-Farabi’s heritage in Europe.

Developing mathematics and astronomy, al-Farabi made comments on the works of Euclid and Ptolemy. He owns the “Guide to Geometric Constructions” and “Treatise on the True and Unreliable in the Judgments of the Stars.”

Al-Farabi’s natural science treatises include Commentaries on Ptolemy’s Almagest, On Galen’s objection to his disagreement with Aristotle regarding the organs of the human body, On the organs of animals, On the need for the art of chemistry, The Book of High Discourses on the Elements sciences of physics “and others.” The word about emptiness “by al-Farabi is possibly the first scientific work on vacuum in the history of mankind.

The following works of the great scientist are devoted to research in the field of logic: “Categories”, “Dilelectics”, “Book of Letters”, “Gemmas of Wisdom”, “Speeches Used in Logic”, “Analytics”, “Proof”.

The versatile works of Abu Nasr al-Farabi have made an invaluable contribution to the development of human civilization and philosophical thought. The worldview of al-Farabi is recognized by modern researchers as a link between the ancient world and the medieval Islamic world, on the one hand, and the Islamic Middle Ages and Western Europe, on the other.

Arab scholars and thinkers Al-Biruni, Ibn-Sina, Ibn-Rushd, Ibn-Badj, Ibn-Tufayl and many others considered themselves disciples of al-Farabi and had a huge impact on the culture of the Renaissance in Europe.

Ibn Sina said that he understood Aristotle’s Metaphysics only with the help of al-Farabi’s comments. Ibn Sina’s medical work was highly regarded in Europe throughout the Middle Ages. Ibn Rushd was known in Europe under the name of Averroes. He developed al-Farabi’s idea of ​​the superiority of philosophy over religion, reason over revelation, laying the foundations of the doctrine of the duality of truth. Ibn-Badja was also influenced by the philosophy of al-Farabi. In his work “On the way of life of the secluded” he writes about the important role of knowledge in achieving ethical perfection. Ibn-Tufayl in “The Novel about Hayy, the son of Yakzan” develops the idea of ​​al-Farabi about the perfection of the philosophical way of knowing the truth.

Speaking about the influence of al-Farbi on European philosophy, first of all, mention should be made of the Jewish philosopher, theologian Maimonides, whose work “Guide to the Lost” contains the ideas of al-Farabi. Through Maimonides, a thread can be traced in the history of philosophy, leading from al-Farabi to Spinoza, D. Scot, R. Bacon. The English monk and philosopher R. Bacon, who spoke Arabic, studied the works of al-Farabi in originals. During the Renaissance, Europe regained the “treasures” of classical ancient Greek philosophy and the merit of the “Second Teacher” is of no small importance in this.

Al-Farabi is one of the key figures in the history of intellectual thought that influenced the development of world civilization. His legacy has contributed to the establishment of dialogue and the convergence of the cultures of East and West. His writings on common sense, ethics, science, music and happiness have remained relevant for over a thousand years. We still need them today in building a modern, virtuous society.

Al-Farabi and his encyclopedic legacy, expressing universal aspirations to the heights of perfection, are beyond time and beyond spatial boundaries, which is why through him and his work the culture of the past becomes organically understandable to many cultures of the modern world.

The life of al-Farabi is a unique example of striving for knowledge, understanding the world and the meaning of life. On the reflections and spiritual foundations of the great philosopher, one can educate a person as a person and strengthen the true humane values. The wisdom of the great teacher is very relevant and makes a lot of sense today. /// Embassy Kazakhstan in Turkmenistan, 23 July 2020