The Republic of Korea (South Korea) is winning the fight against Covid-19. It is a combined result of timely response, multifaceted effort and total dedication of the frontline healthcare professionals. It is a successful model of how to deal with the outbreak of an infectious disease.

The worst is over and now Korea is ready to share its experience with the world.

As of 30 March 2020, 58.7% of confirmed cases were linked to the Shincheonji Church and 82% were the residents of Daegu / North Gyeongsang Province. Also, 476 confirmed cases were found in the people arriving from abroad and nearly half of them were detected at the point of entry.

The number of new cases has been declining since the start of March. The daily total of new cases is less than 100 now. The recovery rate is also picking pace.

The success of Korea is in its strategy – test, trace, treat.

It is also attributable to the civic participation. The nation is united in the face of a daunting challenge.

Rapid and widespread testing is at the core of the strategy. The testing capacity is 20000 tests per day. So far, more than 400000 people have been tested. The testing is done at 118 centres across the country.

There are 79 drive-through stations where the people can register and the specimen can be collected within 10 minutes without the people getting out of their vehicle.

Because of timely testing and efficient treatment, the fatality rate is only 1.64%, considerably lower than the world average. More than 79% of fatalities are among the patients who were more than 70 years in age. Only 0.036% of the younger people – below the age of 49 – succumbed to Covid-19. 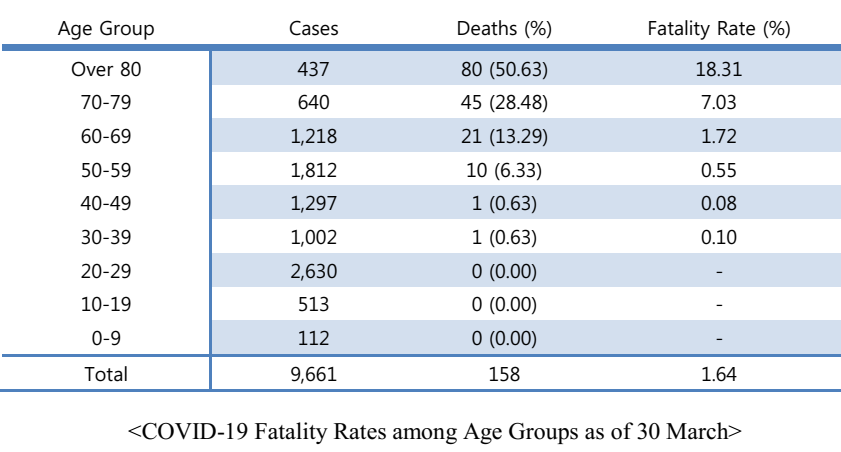 The people in overwhelming numbers are volunteering to play whatever role they can. At one point, there were six volunteers for each patient in the hard-hit Daegu/North Gyeongsang Province.

The government of Korea is committed to compliance with the WHO recommendations. Equally, there is the resolve to help the world community in overcoming this challenge.

Ms. Kang Kyung-wha, the foreign minister of Korea, said in a conversation with the World Economic Forum, “It doesn’t matter that my country is stabilizing and coming to grips with this. The world must overcome this together.” /// nCa, 6 April 2020