The embassy of China in Turkmenistan hosted on Monday (30 September 2019) a reception to mark the 70th anniversary of the formation of the People’s Republic of China.

Here is the speech of Ambassador Sun Weidong on the occasion:

Dear Advisor to the President on Oil and Gas Issues, Mr. Kakaev!

I warmly welcome you to the reception dedicated to the 70th anniversary of the founding of the People’s Republic of China. Thank you for celebrating this important holiday with us.

On October 1, 1949, Chairman Mao Zedong solemnly proclaimed the formation of the People’s Republic of China, which concluded the long history of aggression and oppression from the Opium War in 1840 and opened a new chapter for the great rebirth of the Chinese nation. For 70 years after the founding of a new China under the leadership of the Communist Party of China, the multinational Chinese people fought hard and persistently advanced, making a great leap forward – getting on their feet, getting rich and becoming powerful, thereby creating the magnificent creation of “giving China a completely new look.”

– China has performed a miracle of economic development. Compared to the first years after the formation of the PRC, China’s GDP has grown 175 times and in 2018 exceeded 13.6 trillion US dollars, which is approximately 16% of the total global economy. China firmly holds the place as the second largest economy in the world. China is the only country in the world where all industrial spectra were created according to the UN classification, and has become the world’s foremost industrial and trade power, as well as the largest country in terms of foreign exchange reserves. For several years in a row, China’s contribution to the growth of the world economy has exceeded 30% and has become the most important source and main stabilizer of world economic growth.

– China has made a scientific and innovative leap. China invariably follows the path of independent innovation, takes the second place in the world in terms of investment in research. For several years in a row, China is the first in the world in the number of patent applications for inventions and their authorization, and the second in the world in the number of scientific and technical articles published in international publications and references to them. Important original achievements were achieved in the fields of manned space exploration, exploration of the moon, quantum technology, deep-sea probe, satellite navigation and many other areas. The large passenger plane S919, an aircraft carrier of its own production, a high-speed train, 5G mobile communications, mobile payment, data processing in supercomputers and other innovative technologies have already become China’s new calling cards.

– China has turned into a comprehensive middle-income society. In 2018, per capita GDP of China amounted to approximately 10 thousand US dollars and increased by almost 71 times compared with the first years after the formation of the PRC. Life expectancy in China has been increased from less than 40 to 77 years. Basic pension and health insurance systems cover more than 0.9 and 1.3 billion people, respectively. After pursuing a reform and opening up policy in 1978, more than 700 million people in need were spared from poverty, which UN Secretary-General Antonio Guterres praised: “China’s experience can be useful for other developing countries.” Next year, China will seek to fully build a middle-income society and completely eradicate absolute poverty, which will be an important contribution to the implementation of the 2030 Agenda for Sustainable Development.

– China has opened a new path of great power diplomacy with its own specifics. China constantly adheres to an independent and self-regulating path of peaceful development and implements an openness strategy focused on mutual benefits and joint winnings. China has already established diplomatic relations with 180 countries and partnerships of various types with 110 states, regions and international organizations. China ranks second in terms of contributions to the UN budget and the amount of funds allocated to UN peacekeeping operations. China also sends the largest number of peacekeepers among the five permanent members of the UN Security Council. The initiative to jointly build “One Belt, One Road” was widely welcomed by the international community. More than 130 countries and 30 international organizations have signed documents with China on the joint construction of the “One Belt, One Road”. Chairman Xi Jinping put forward the concept of building a community of the common destiny of mankind, which was several times inscribed in UN resolutions and provides a Chinese version for resolving issues of human development.

The achievements of China over the past 70 years are comprehensive and innovative, and its changes are profound and cardinal. 70 years of experience show us that China was able to develop, become rich and powerful exclusively under the leadership of the Chinese Communist Party, only adhering to the path of socialism with Chinese characteristics, the path of reform and openness, the path of cooperation and joint win. In the new historical era, the Chinese people are enthusiastically waging a consistent struggle to transform China into a rich and powerful, democratic and civilized, harmonious and beautiful modernized socialist power in 2049, when the 100th anniversary of the founding of the PRC will be celebrated. Then the Chinese nation will be able to proudly appear in the family of world nations and will make a greater contribution to the cause of peace and development on the entire planet.

For 27 years after the establishment of diplomatic relations between China and Turkmenistan, bilateral relations have continuously maintained a healthy, stable development trend. In particular, under the strategic leadership of Chairman Xi Jinping and President Berdimuhamedov, a jump in the development of Sino-Turkmen relations was made.

– We, following the principles of equality, are continuously strengthening political relations. China is among the first countries in the world to establish diplomatic relations with Turkmenistan, as well as its first strategic partner, the status of which was determined by a political document. Both parties respect and help each other, render each other strong support in matters relating to their fundamental interests. Recently, the Chinese side, as a co-author, supported the Turkmen side in the adoption by the UN General Assembly of the Resolutions “On cooperation with the International Fund for Saving the Aral Sea” and “2021 is the International Year of Peace and Confidence”, the Turkmen side supported the Chinese policy regarding the Xinjiang Uygur Autonomous Region through joint signing with China the message to the President of the UN Human Rights Council and the UN High Commissioner for Human Rights. All this fully demonstrated the trust of a high level of bilateral relations.

– We, following the looks to the future, are actively promoting the pairing of strategies. President Berdimuhamedov noted that the initiatives “One Belt, One Road” and “Revival of the Great Silk Road” are based on a common historical basis and are designed to serve the well-being and prosperity of the peoples of all our countries. Both initiatives are highly aligned. The China-Turkmenistan gas pipeline, container transport by rail route China-Kazakhstan-Turkmenistan-Iran became models of cooperation as a result of the combination of both initiatives. The Chinese side is ready, together with the Turkmen side, to make efforts to actively promote conjugation of strategies, to provide mutual support and participation, to search for large common ground for cooperation, as well as to jointly promote the great cause of building the “One Belt, One Road” and the “Revival of the Great Silk Road.”

– We, following the principles of mutual benefit and joint win, comprehensively expand practical cooperation. In the first years after the establishment of diplomatic relations, Sino-Turkmen bilateral trade amounted to only 4.5 million US dollars and in 2018 reached 8.4 billion US dollars, an increase of more than 1800 times, reflecting the swiftness of the Akhal-Teke horse. Since 2011, China has become Turkmenistan’s largest trading partner for 8 years in a row; the Chinese brands Huawei and Lenovo are very popular in Turkmenistan. Sino-Turkmen gas cooperation is strategic, long-term, mutually supportive and mutually beneficial. Since the end of 2009, China has imported more than 250 billion cubic meters of Turkmen gas in total. The structure of Sino-Turkmen gas cooperation has already developed, covering an entire industrial chain, including production and development, transportation, trade, construction work and financial services.

– Following the centuries-old friendship, we are constantly building up cultural and humanitarian ties. The traditional friendship between the peoples of the two countries is passed down from generation to generation and receives a consistent deepening. Bilateral exchanges and communications in the fields of education, culture, sports, youth, etc. are continuously strengthened. Currently, over 2,400 Turkmen students are studying in China. Since June of this year, the Akhal-Teke horse festival has been held in Jilin Province of China, which has been going on for three months and wins a warm greeting from local residents. For several years in a row, the Embassy of the People’s Republic of China in Turkmenistan has been organizing trips to China for youth, Paralympic athletes, teachers, students and schoolchildren from Turkmenistan, which significantly enhances mutual understanding and friendship.

Today, when the world is undergoing tremendous changes unprecedented over a century, the fate of different states is closely interconnected as never before. The Chinese people are celebrating the 70th anniversary of the founding of the PRC and are making unremitting efforts to realize the Chinese dream of the great revival of the Chinese nation. A few days ago, the Turkmen people solemnly celebrated the 28th anniversary of the country’s independence and are struggling to build a prosperous and powerful Fatherland. The Chinese side is ready, together with the Turkmen side, to act hand in hand in one direction, actively promote the construction of a community of the common destiny of mankind and achieve the magnificent goals of development and rise for the benefit of our countries and their peoples. 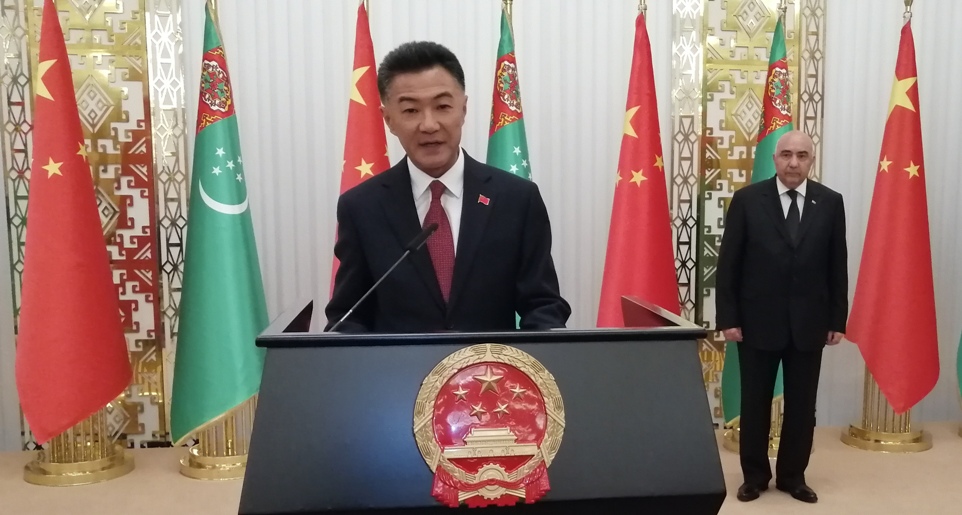 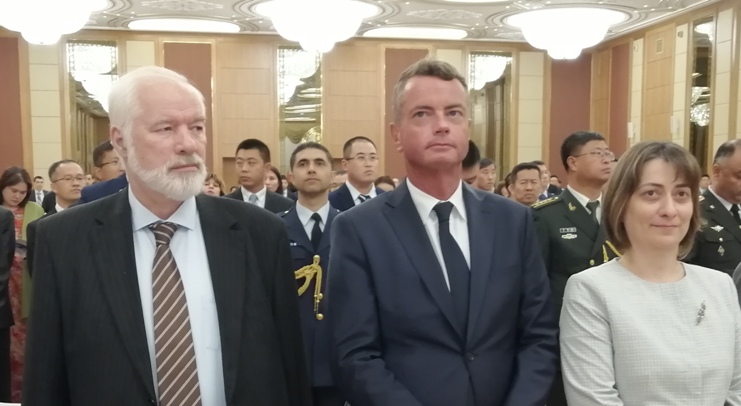 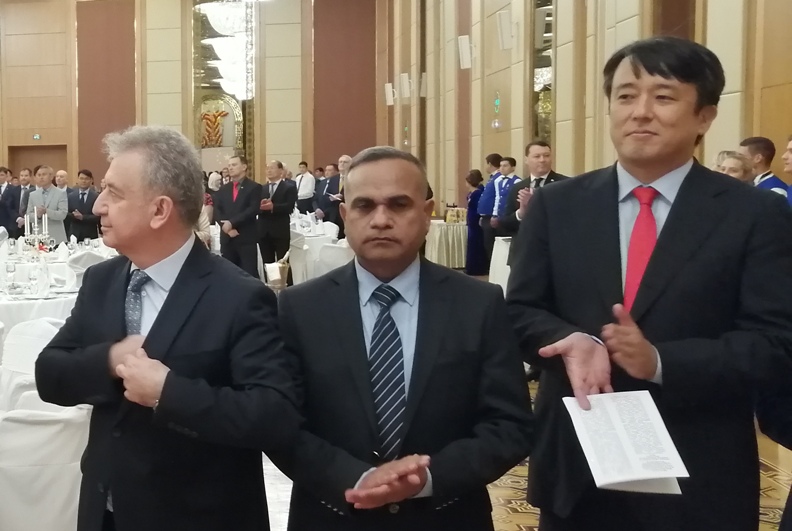 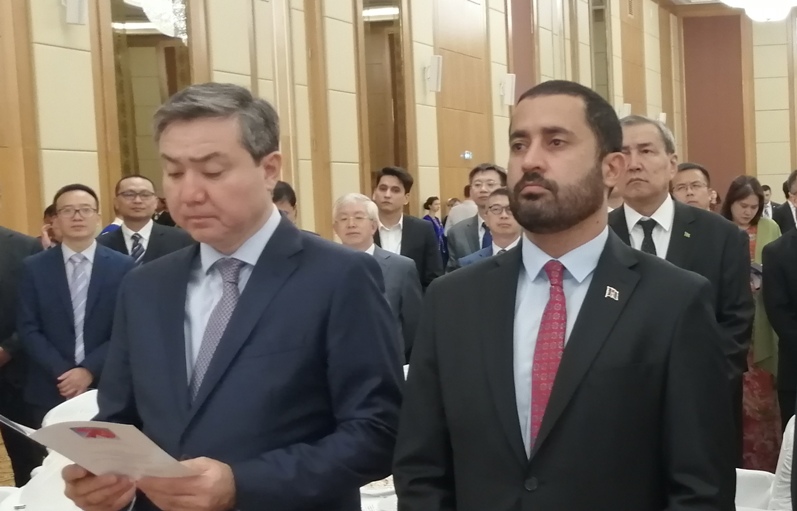 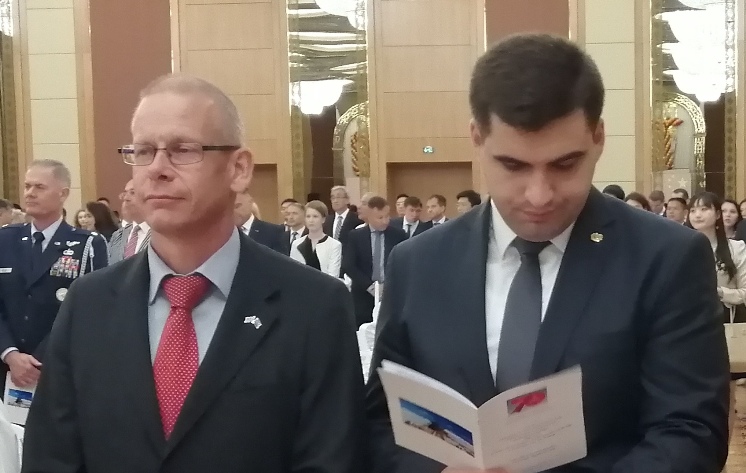 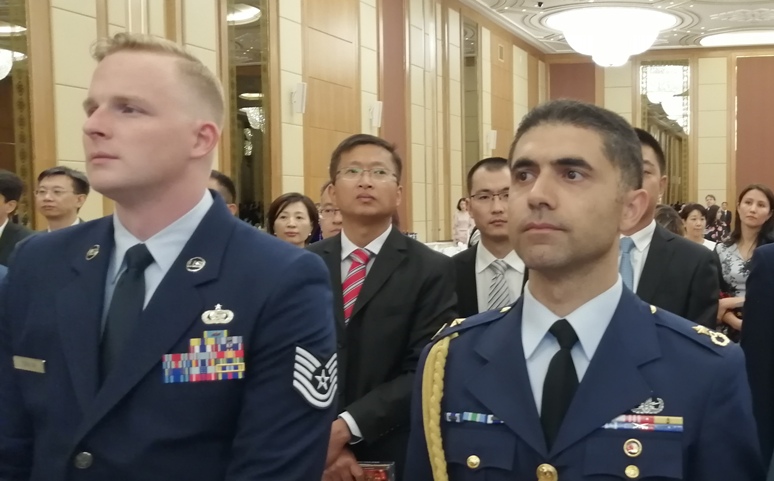 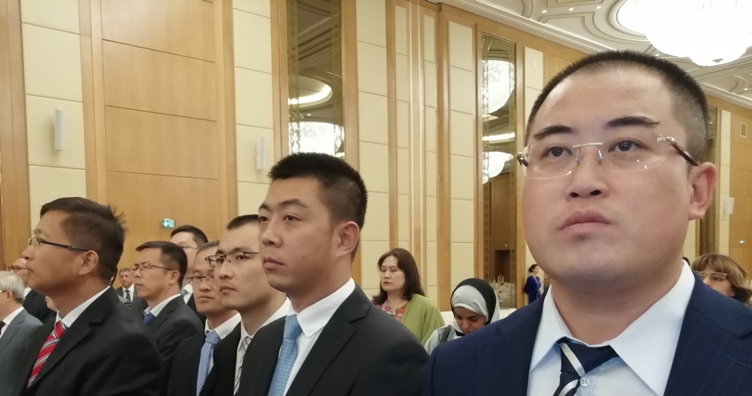 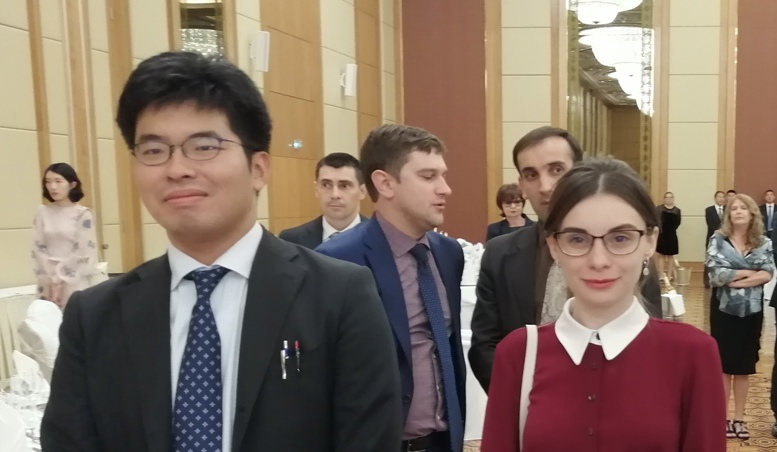 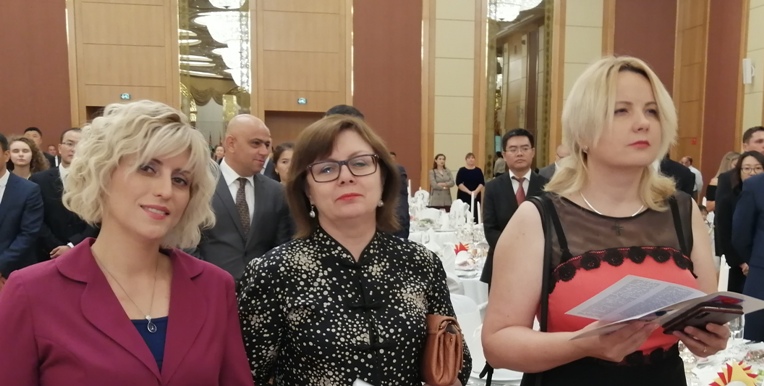 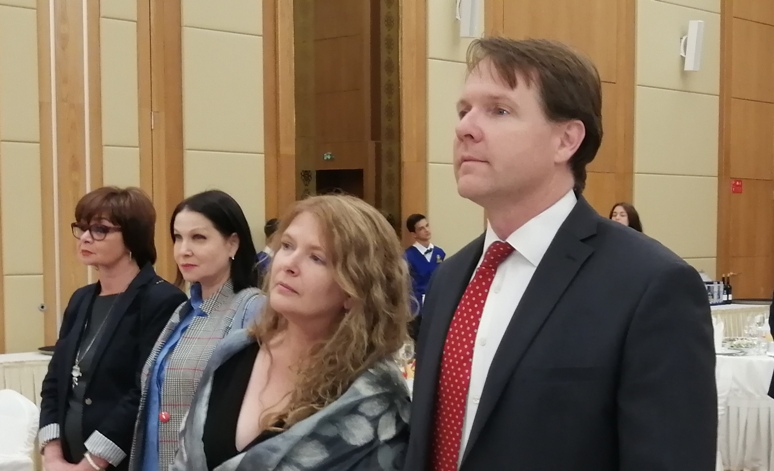 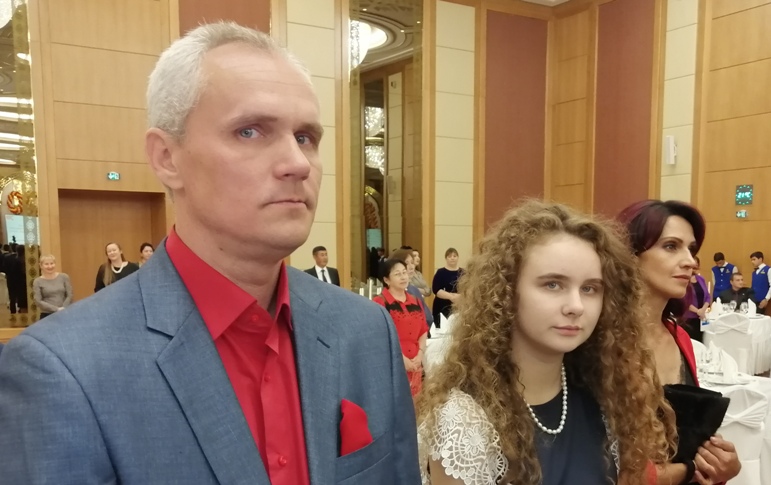 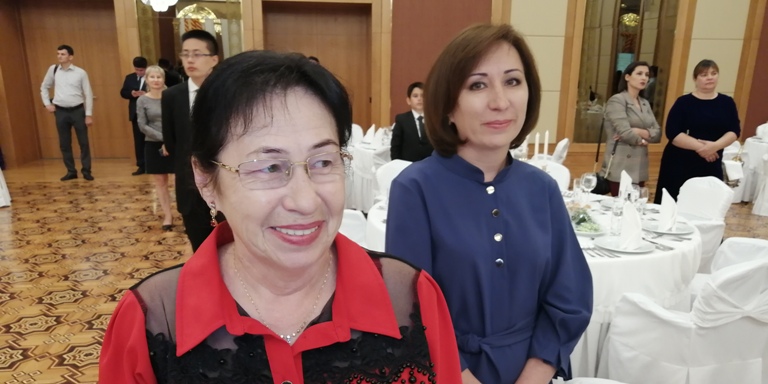