Home » Sexual Exploited Girls and Child Soldiers Around the World

Amnesty International has once again launched a campaign under the following slogan: “Child soldier. They will throw him into the front lines, and if he dies, they’ll go to a school and find another; and after that another”. Jean-Charles, Guru missionary in Nord Uganda, has explained that children are kidnapped and turned into authentic killing machines. For many years now, terrorist group LRA conducts these kidnappings and reduces the children’s mothers to sexual slaves for the children’s army.

Many young girls of South East Asia are miserably destined to be slaves of sexual trafficking. Under this slogan, Anesvad launches an advocacy campaign to save these innocent girls and train them to find a decent job.

According to the Pontifical Mission Societies, child exploitation rates are mind-boggling: there are 14 million homeless children due to AIDS. Out of the half of the 600 million poor people in the world, 130 million do not go to school, 180 million suffer from malnutrition, 250 million are exploited for labor, and 1 million are victims to sexual trafficking. 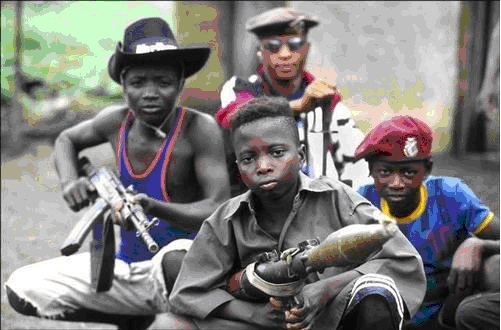 A child’s image represents an adult’s moral conditions. A civilization that fights against children is a world that has lost any type of hope. Allowing children to suffer poverty, abuse, beatings, and/or abandonment is a crime against humanity that will soon be judged by their own descendants.

Lastly, one out of seven children born in the most indigenous countries is sentenced to die before reaching the age of 5. About 250,000 children under-5 die each year. Most of these children die due to the lack of food and vital nutrients; condition which weakens them, makes them drop weight, thus, emphasizes their vulnerability. These children are exposed to a high risk of catching infectious diseases. This burden of grief is prevalent in all countries of Latin American and the Caribbean.

The Declaration of the Rights of the Child states that every child must enjoy the benefits of social security. Every child has a right to grow and develop in good health. It is therefore necessary for special care to be provided for the child and the mother, such as pre- and post-natal care. Every child must enjoy appropriate nutrition, housing, recreation, and medical services.

(Translated by Gianna A. Sanchez Moretti).

Author and journalist Clemente Ferrer has led a distinguished career in Spain in the fields of publicity and press relations. He is currently President of the European Institute of Marketing. clementeferrer3@gmail.com