You are here: Home / Articles And Reports / A New Chapter in a New Era 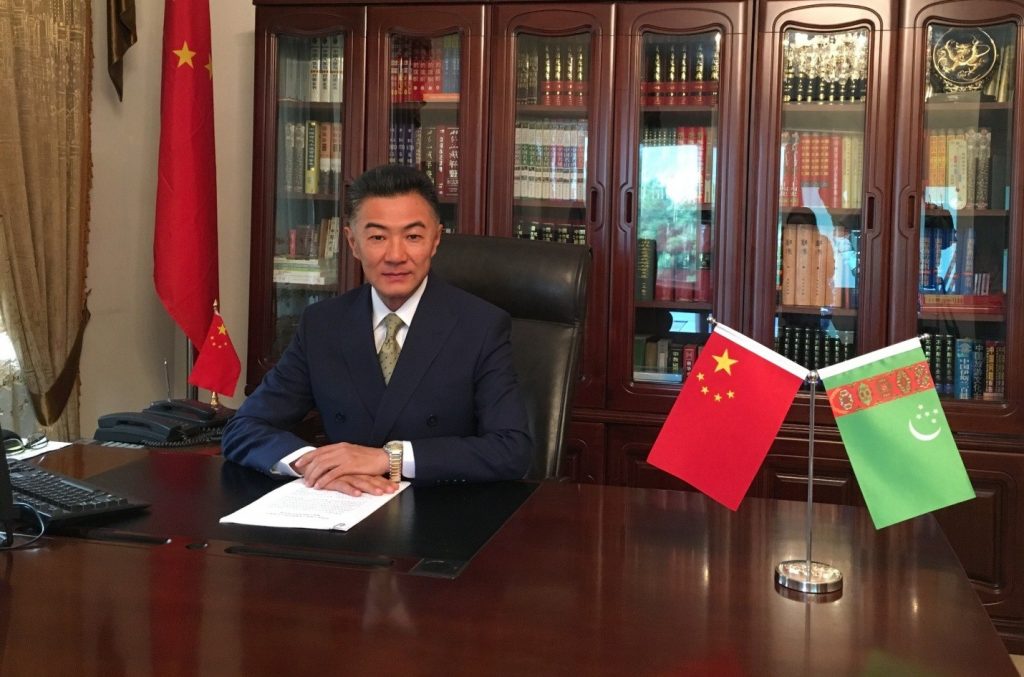 The sides, having deeply exchanged views on cooperation in combating the pandemic, economic recovery, maintaining regional security and enhancing international cooperation, published a Joint Statement. The parties unanimously decided to create the format of the China-Central Asia meeting of foreign ministers and hold regular meetings, which marked the beginning of a new chapter in the history of cooperation between China and Central Asian countries.

China and the countries of Central Asia are good and close neighbors, the creation of a collective dialogue format between them has matured naturally at the right time. In 1992, China was one of the first to establish diplomatic relations with the five independent Central Asian states, which opened a new page in bilateral relations.

For 28 years, China has established strategic partnership relations with all Central Asian countries. China and the Central Asian states respect each other’s path of development, chosen in accordance with national characteristics, provide each other with firm support in matters relating to vital interests, such as state sovereignty, security and territorial integrity, obvious results of practical cooperation were achieved in various fields, which became an example of a new type of interstate relations characterized by mutual respect, equal cooperation and mutual benefit.

Against the backdrop of a rapidly changing and complicating international situation, as well as the spread of the COVID-19 epidemic, the creation of the China-Central Asia meeting format for foreign ministers will strengthen coordination, jointly overcome temporary difficulties and achieve common development.

This session demonstrated the concept of cooperation for a common future. Faced with a sudden outbreak of coronavirus infection, China and Central Asian countries are cooperating in a spirit of mutual assistance. At a difficult anti-epidemiological moment for China, the Governments and various strata of society in CA countries supported the Chinese side in various ways in the fight against the epidemic.

After the outbreak of the epidemic in the Central Asian region, the Chinese side immediately dispatched teams of medical experts to the respective countries, repeatedly provided medical protective equipment, and organized remote exchange between specialists many times.

The parties noted the inadmissibility of discrimination, discrediting, racism and xenophobia in the fight against the pandemic, and are ready to further strengthen cooperation in the field of epidemiology, the development of vaccines and traditional medicine.

More Chinese humanitarian supplies will still be delivered in accordance with the needs of the Central Asian countries, including ventilators, masks, test reagents and protective suits. Xinjiang Uygru Autonomous Region of the PRC, as a close neighbor and close partner of Central Asia, is ready to provide assistance by providing another batch of medical protective equipment. In addition, in the coming years, the Chinese side intends to train specialists from Central Asian countries in the field of medicine and healthcare, is ready to open new centers of traditional Chinese medicine in Central Asia to help protect the health and safety of local residents, and strives to form an effective partnership in the field of healthcare between China and Central Asia. Asia.

At this meeting, an agreement was reached on joint stimulation of economic recovery.

Since the establishment of diplomatic relations, economic cooperation between China and the Central Asian countries has been fruitful, the volume of mutual trade has grown almost a hundredfold, the China-Central Asia gas pipeline and the China-Kazakhstan oil pipeline have been built, China has become one of the main partners of Central Asia in trade, investment and cooperation in industrial production capacities.

The epidemic has dealt an unprecedented blow to regional socio-economic development.

The heads of the foreign affairs agencies noted their readiness to jointly stimulate economic recovery and development, will promote the alignment and harmonization of the One Belt and One Road initiative with national strategies and initiatives for international cooperation of the Central Asian countries, create an integrated and multifunctional system of infrastructure connectivity and sustainable transport architecture, and increase the volumes of mutual trade and improve its structures, actively expand cooperation in the field of high technologies, including e-commerce, smart city, artificial intelligence and big data, and strive to jointly build a digital partnership.

The Chinese side is ready to increase imports of agricultural products from Central Asian countries, make efforts to jointly search for a new model of modern agricultural cooperation, ensure uninterrupted supply and stability of the agricultural market in the region, and protect regional food security.

China is ready with the Central Asian countries in the spirit of complete unity and solidarity to promote the revitalization and development of the regional economy.

At this meeting, the parties have shown the determination to ensure regional security.

Security is a prerequisite and basis for development and cooperation. The “three forces of evil”, that is, terrorism, extremism and separatism pose a serious threat to security and stability in the region. In recent years, China and the Central Asian countries have been actively developing cooperation to ensure security, by joint efforts they are fighting against the “three forces of evil”, which powerfully protects common interests. During this meeting, the parties announced the continuation, in the spirit of the concept of common, comprehensive, joint and sustainable security, of deepening cooperation in the field of security, combating the “three forces of evil”, drug trafficking and cross-border organized crime, ensuring regional security and stability.

The parties will also resolutely support the peace process in Afghanistan, are ready to play a constructive role in promoting inter-Afghan dialogue, establishing peace and stability in this country, restoring the national economy and further involving Afghanistan in regional integration processes.

The Chinese side proposed, together with the Central Asian countries, as soon as possible to create a mechanism for cooperation to ensure the security of large projects within the framework of the Belt and Road, first of all, it is about significant cross-border infrastructure projects, including highways and railways, oil and gas pipelines and container trains China-Europe for the sake of common security and common prosperity in the region.

This meeting voiced a unanimous voice in defense of multilateralism and international justice. China and the Central Asian states have coinciding or similar positions on a number of topical issues on the international and regional agenda, and maintain close coordination and agreement in international affairs, which indicates a high degree of political mutual trust and a high level of strategic partnership.

In today’s world, hegemonism and power politics still exist, protectionism and unilateralism are increasing, and the fruits of peace and cooperation are eating up the outdated thinking of the Cold War and the zero-sum game.

The heads of the foreign affairs agencies noted that they intend to further build up interaction within the UN and other international institutions, as well as financial structures, together to confront global and regional challenges, firmly uphold a multilateral approach, oppose interference in the internal affairs of other countries, defend international justice, promote world order and the system of global governance in line with equitable and rational development.

The Chinese side is ready to take a clear position with the Central Asian countries, uphold the purpose and principles of the UN Charter, support the international system under the auspices of the UN, resist the unilateral approach and bullying in all its manifestations, strengthen cooperation on such multilateral platforms as the UN and WTO, join efforts with partners on the SCO, including with Russia, in the matter of justice and democratization of international relations.

China and Turkmenistan are sincere friends, reliable partners and close brothers. In 1992, China was among the the first to establish diplomatic relations with Turkmenistan. In 2013, China became the first strategic partner of Turkmenistan by signing a political document.

The Chinese side, as a co-author of the resolutions of the UN Assemblies, twice supported Turkmenistan in affirming its status as a permanently neutral state. In the 28 years since the establishment of diplomatic relations, the Sino-Turkmen trade turnover has sharply reached about 10 billion US dollars and increased more than 2 thousand times.

Since 2011, China has been the largest trading partner of Turkmenistan for 9 consecutive years.

Since the commissioning of the China-Turkmenistan gas pipeline in 2009, China has been importing a total of over 270 billion cubic meters of Turkmen natural gas.

At the same time, both sides are continuously deepening cooperation in the security sphere and developing close interaction in the international arena, including within the UN, which firmly protects the common interests of the two countries.

This year, at the beginning of the outbreak of the COVID-19 epidemic, the Embassy of the PRC in Turkmenistan for the first time created a contact mechanism for the prevention of the epidemic with the Ministry of Foreign Affairs of Turkmenistan, within which the mutual exchange of information is carried out, assistance is provided to Turkmen students in China, as well as how to properly organize preventive work for Chinese companies in Turkmenistan, etc.

Leading experts of the State Committee for Healthcare of China held two videoconferences with the Ministry of Health and Medical Industry of Turkmenistan and shared their experience in the prevention and treatment of coronavirus. Focusing on the normalization of epidemic prevention and the post-pandemic era, China and Turkmenistan are actively discussing new areas of cooperation.

Within the framework of bilateral platforms and the format of the China-Central Asia ministerial meeting, there is a wide space for cooperation between China and Turkmenistan in the fields of transport and logistics, traditional medicine, cross-border e-commerce, 5G, artificial intelligence, big data, cloud computing, satellite navigation, etc.

At a new historical stage, there is a new situation and opportunities for cooperation in front of China, Turkmenistan and other Central Asian countries. State Councilor, Minister of Foreign Affairs of the People’s Republic of China Wang Yi stressed that China is aimed at strengthening good partnerships in the name of peace, harmony and prosperity, and is ready, together with Central Asian partners, to strengthen political mutual trust and increase the level of cooperation in the interests of joint development.

During the first meeting of the ministerial meeting “China – Central Asia” in the format of a video conference, Deputy Chairman of the Cabinet of Ministers, Minister of Foreign Affairs of Turkmenistan R. Meredov. also stated that the countries of Central Asia and China have powerful resource, economic and scientific-industrial potential, through which they can make an even greater contribution to ensuring global peace, stable development and security.

We are convinced that under the strategic leadership of Chinese President Xi Jinping and the leaders of the Central Asian countries, taking advantage of the occasion of the meetings of foreign ministers, China and all Central Asian countries jointly confront challenges in the name of common development and prosperity, will definitely write a new, more wonderful chapter in the future! /// nCa, 22 July 2020