You are here: Home / Articles And Reports / Revolutionizing Fruit and Vegetable Sector of Turkmenistan – Part 2

The compilation of the standardization guide took quite some time and tremendous work. The first task was to study the flaws that appear naturally and the flaws that take place because of poor storage and handling conditions.

Once it started taking shape, it became clear that its potential went far beyond the mere cataloguing of the visual and other flaws in the produce. 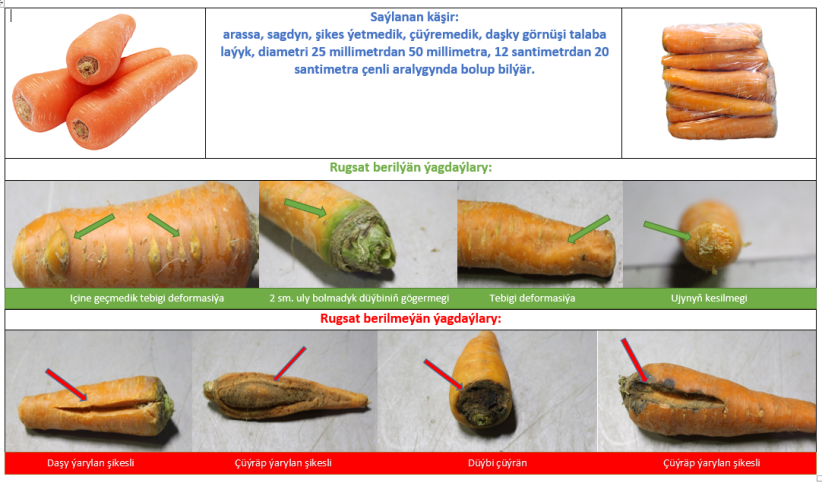 The introduction with the farm and garden marketing structures of other countries was helpful in understanding that the standardization was a vital step in quality control. This is very important in terms of getting ISO and other international certifications for exporting the fruit and vegetables of Turkmenistan. 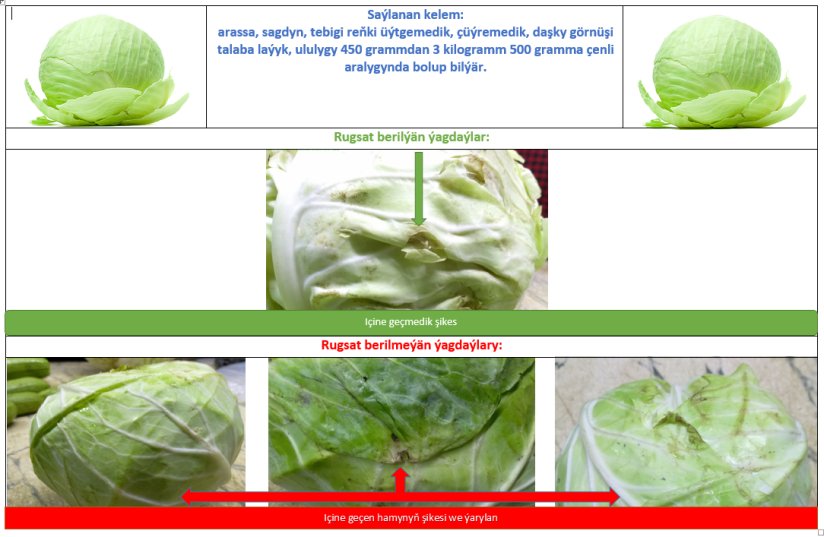 The standardization guide developed by Dovlet and his team at Ter Onum is already influencing the local markets.

Even the markets and shops that are not in the Ter Onum network are sorting the fruit and vegetables on display in separate trays depending on their visual flaws. This is in turn benefiting the buyers because the produce with more visual flaws is priced slightly lower than the batch that has passed the guidelines of standardization.

As Dovlet pointed out during our conversation, when the fruit or vegetable loses freshness it also loses weight.

Hypothetically speaking, if a retailer stocked 10 kg of a fruit or vegetable, and could not sell it until it lost its freshness, they are left with something like 8 kg. A few such losses a day could cut deeply in the profits of the shop. 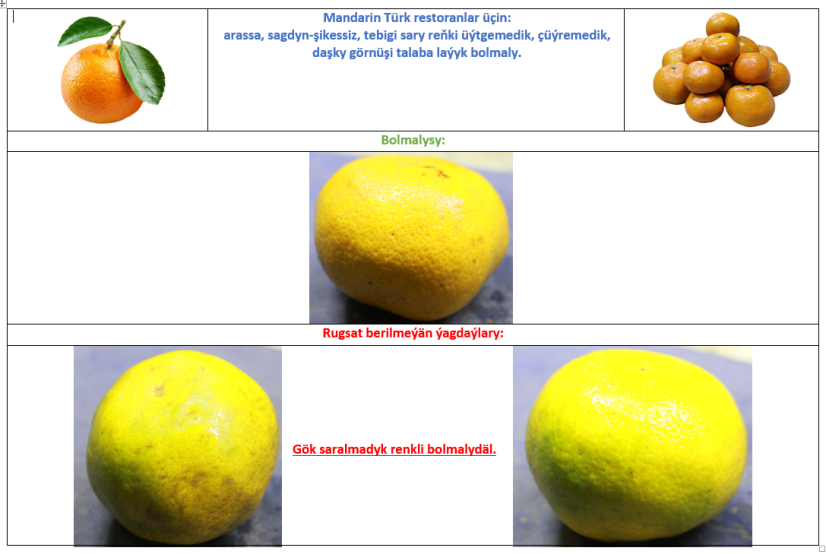 The standardization guide is useful for the consumers too and not just because of the aesthetically pleasing appearance of a fruit or vegetable.

There could also be some hazard to health even though it is not mostly the case.

As you may have noticed looking at the slides in these two parts of the series, there are local fruit and there are imported fruit in this standardization guide.

It is helpful for the companies exporting fruit to Turkmenistan in the sense that it gives them the idea of the degree of tolerance the Turkmen consumer could be willing to accord to their produce. 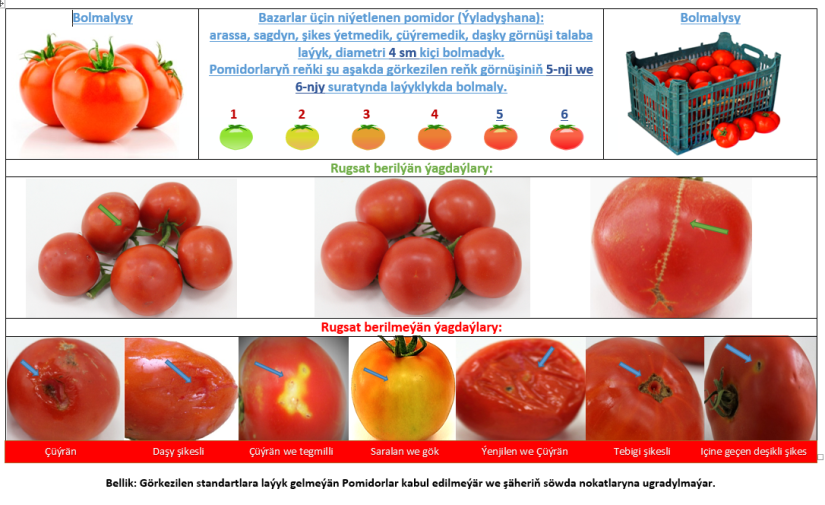 The standardization guide of Ter Onum is also helpful for the local authorities that are mandated to enforce the quality standards in the markets.

Although they have a whole bunch of their own guidelines and standards against which to judge the suitability of the produce, backed by their own labs for testing, this guide is an easy way for visual scanning. 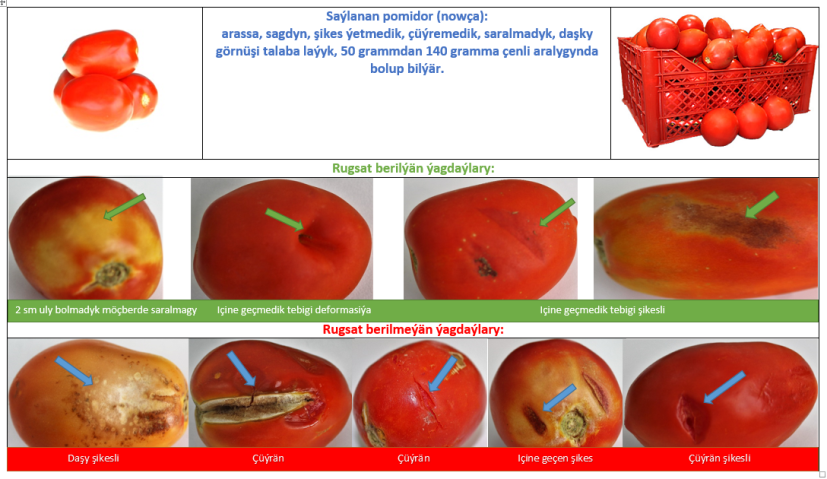 The small farmers in remote areas who previously did not have any idea as to what can be sold at top price and what would be rejected right away by the consumers are also the beneficiaries of this visual guide of standardization.

These farmers are also learning another lesson — they are now mindful of the fact that the packing, handling, and transportation conditions can affect the visual appearance of their produce, thereby causing damage in the price they can fetch from the market. 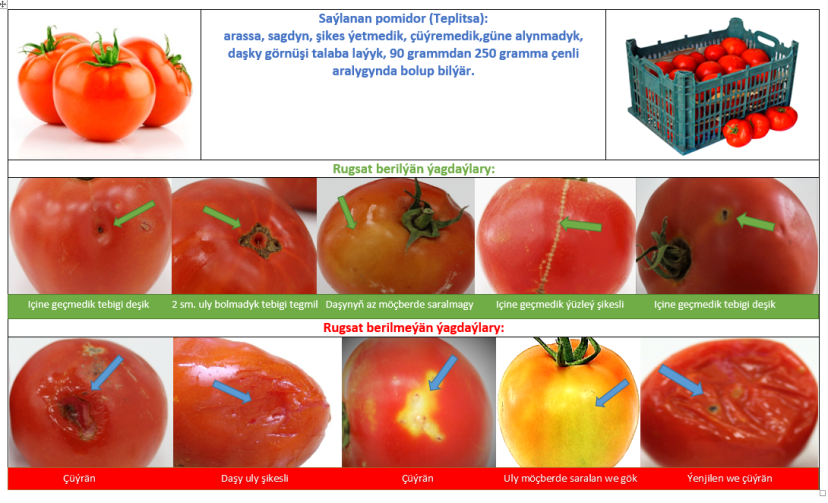 By drawing a line between what is acceptable and what is not in terms of visual and physical flaws of fruit and vegetables, the Ter Onum standardization guide is a versatile tool for the entire chain, from the farmer to the consumer. /// nCa,