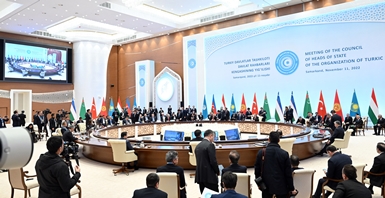 The Organization of Turkic States (OTS) met for its first heads of state summit in Samarkand on 10-11 November 2022. — It is evolution in motion. It is also powerful display of agility and purpose.

The Turkic Council held eight summits of the heads of state from 2011 to 2021. In the eighth summit, held in Istanbul on 12 November 2021, it was agreed to upgrade the Turkic Council and rename it Organization of Turkic States (OTS).

The first OTS Summit in Samarkand, hosted by President Shavkat Mirziyoyev was a landmark event.

The documents signed during the summit include the Samarkand Declaration, OTS’s 2022-2026 Strategy, cooperation on transport between member states, the establishment of simplified customs corridors and trade strategies agreements.

The range of areas covered by these documents is in line with the motto of the summit: “New era of Turkic civilization: towards common development and prosperity.” No doubts, the summit has opened up new horizons and prospects for practical cooperation between the Turkic countries.

While the Turkic states are recalibrating the current mechanisms and forming new mechanisms for partnership among themselves, there is the need to look as to how it will influence their relations with the rest of the world, particularly the countries and regions bordering them.

The Turkic countries are also a transit space for panoramic trade in the Eurasian land mass. There are several trade and transit corridors and the development of these corridors is a continuous process. As seen during the past few years, the transportation of cargo through the Turkic states is quick and less expensive compared to the sea routes.

The Turkic states, some of them with vast territories, and all of them with centuries of experience in agriculture, are ideally located to become the grain and food providers to the Eurasian land mass. With their variety of terrain and climate the Turkic states are amply suited to prevent the looming global food crisis.

The mutual trade turnover among the Turkic states is at present only a fraction of the true potential. This is the desire to address this issue. The increase in the intra-Turkic trade will perhaps proportionally reduce the trade with the other countries. This would actually be an opportunity for the partners of the Turkic states to establish joint ventures or locate some of their production facilities to the space of the Turkic states. It is a market of more than 170 million, with the literacy rate among the highest in the world.

The meticulous planning that went into the organization of the Samarkand Summit has earned Uzbekistan laurels from all quarters. It is just the start. Uzbekistan chairs OTS until the next summit in Kazakhstan in 2023.

There is also the need to underline that OTS is not a political or military alliance. It is purely a platform for shared prosperity and development through cooperation in all areas of life and economy.

The year 2023 could be unpredictable in many ways and the world needs the stabilizing effect of OTS. ///nCa, 12 November 2022