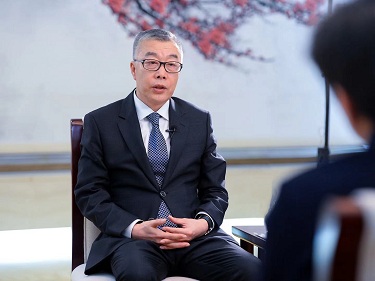 2. We are one China, and Taiwan is part of China. This is an indisputable fact supported by history and the law. Taiwan has never been a state; its status as part of China is unalterable. Any attempt to distort these facts and dispute or deny the one-China principle will end in failure.

4. Taiwan has been an integral part of China’s territory since ancient times. Moves to separate Taiwan from China represent the serious crime of secession, and undermine the common interests of compatriots on both sides of the Taiwan Straits and the fundamental interests of the Chinese nation. They will lead nowhere.Taiwan belongs to all the Chinese people, including the 23 million Taiwan compatriots. The Chinese people are firm in their resolve and have a deep commitment to safeguarding China’s sovereignty and territorial integrity, and the fundamental interests of the Chinese nation, and this resolve and commitment will frustrate any attempt to divide the country.

5. The important principles of respecting state sovereignty and territorial integrity as enshrined in the Charter of the United Nations are the cornerstones of modern international law and basic norms of international relations. It is the sacred right of every sovereign state to safeguard national unity and territorial integrity. It goes without saying that the Chinese government is entitled to take all measures necessary to settle the Taiwan question and achieve national reunification, free of external interference.

6. Taking into consideration the overall goal of national rejuvenation in the context of global change on a scale unseen in a century, the CPC and the Chinese government have continued to follow the CPC’s fundamental guidelines on the Taiwan question and implement its principles and policies towards Taiwan, and have made concrete efforts to promote peaceful cross-Straits relations, integrate the development of the two sides, and work towards national reunification. National reunification by peaceful means is the first choice of the CPC and the Chinese government in resolving the Taiwan question, as it best serves the interests of the Chinese nation as a whole, including our compatriots in Taiwan, and it works best for the long-term stability and development of China. We have worked hard to overcome hardships and obstacles to peaceful reunification over the past decades, showing that we cherish and safeguard the greater good of the nation, the wellbeing of our compatriots in Taiwan, and peace on both sides.

7. We will work with the greatest sincerity and exert our utmost efforts to achieve peaceful reunification. But we will not renounce the use of force, and we reserve the option of taking all necessary measures. This is to guard against external interference and all separatist activities. In no way does it target our fellow Chinese in Taiwan. Use of force would be the last resort taken under compelling circumstances. We will only be forced to take drastic measures to respond to the provocation of separatist elements or external forces should they ever cross our red lines. We will always be ready to respond with the use of force or other necessary means to interference by external forces or radical action by separatist elements. Our ultimate goal is to ensure the prospects of China’s peaceful reunification and advance this process.

8. Once peaceful reunification is achieved under One Country, Two Systems, it will lay new foundations for China to make further progress and achieve national rejuvenation. At the same time, it will create huge opportunities for social and economic development in Taiwan and bring tangible benefits to the people of Taiwan. Provided that China’s sovereignty, security and development interests are guaranteed, after reunification Taiwan will enjoy a high degree of autonomy as a special administrative region. Taiwan’s social system and its way of life will be fully respected, and the private property, religious beliefs, and lawful rights and interests of the people in Taiwan will be fully protected. All Taiwan compatriots who support reunification of the country and rejuvenation of the nation will be the masters of the region, contributing to and benefitting from China’s development. With a powerful motherland in support, the people of Taiwan will enjoy greater security and dignity and stand upright and rock-solid in the international community.

9. Peaceful cross-Straits reunification is of benefit not only to the Chinese nation, but to all peoples and the international community as a whole. The reunification of China will not harm the legitimate interests of any other country, including any economic interests they might have in Taiwan. On the contrary, it will bring more development opportunities to all countries; it will create more positive momentum for prosperity and stability in the Asia-Pacific and the rest of the world; it will contribute more to building a global community of shared future, promoting world peace and development, and propelling human progress. After reunification, foreign countries can continue to develop economic and cultural relations with Taiwan. With the approval of the central government of China, they may set up consulates or other official and quasi-official institutions in Taiwan, international organizations and agencies may establish offices, relevant international conventions can be applied, and relevant international conferences can be held there.

10. Embarking on a new journey in a new era, the CPC and the Chinese government will continue to rally compatriots on both sides of the Taiwan Straits, and lead the efforts to answer the call of the times, shoulder historic responsibilities, grasp our fate and our future in our own hands, and work hard to achieve national reunification and rejuvenation. The journey ahead cannot be all smooth sailing. However, as long as we Chinese on both sides of the Taiwan Straits devote our ingenuity and energy to the same goal, let there be no doubt – we will tolerate no foreign interference in Taiwan, we will thwart any attempt to divide our country, and we will combine as a mighty force for national reunification and rejuvenation. The historic goal of reuniting our motherland must be realized and will be realized. /// nCa, 12 August 2022 (in cooperation with Embassy of China in Ashgabat)