The first power generation turbine on the Rogun hydropower (HPP) project of Tajikistan will be commissioned on 16 November 2018. This will coincide with the President’s Day celebrations in Tajikistan.

The Rogun HPP is being built on the Vakhsh River, which is a main tributary to the Amudarya River – it contributes about 25% of water volume of Amudarya.

The project, worth USD 3.9 billion, is being done by the Italian company Salini Impregilo SpA.

The commissioning of the first turbine will mostly be symbolic in nature because it will take 3-5 years for the dam to fill to the level that will make it possible to run the turbine efficiently. The total dam capacity will take 12-15 years to fill.

At 335 meters, it will be the highest dam in the world.

Even though the construction of the dam is in an advanced stage, there is still time to review some of the details and adjust the design and capacity of the dam to make it safer, and longer lasting.

Some legal aspects have been ignored and it is important for the sake of regional cohesion to give them due consideration.

The Vakhsh River being a major tributary to Amudarya is classified as a trans-boundary shared water resource. As such, the norms and conditions of the international best practices are applicable to the case of the Rogun HPP.

As we know, Uzbekistan, Turkmenistan and Afghanistan are the other riparians of the Amudarya i.e. they have the legal right to expect a say in the decision-making about the shared water resources.

In the international law, there are many precedents of the rights and obligations of upper and lower riparians.

The verdict of the Institute de Droit International, better known as Madrid Declaration of 1911 states that the regime of rivers and lakes, contiguous or successive, cannot be altered by one state to the detriment of a co-riparian without the consent of the other. Interference with the utilization of waters by other riparians is banned outright.

The article 4 of the Geneva Convention of 1923 provides that if a state desires to develop hydraulic power, which might cause serious prejudice to any other contracting state, the states concerned shall enter into negotiations with a view to the conclusion of agreements which will allow such operations to be executed.

The article 2 of the Declaration of Montevideo of 1933 provides that no state may, without the consent of the other riparian state, introduce into water courses of an international character, for industrial or agricultural exploitation of their waters, any alterations which may prove injurious to other interested states.

The treaty of Brazil-Uruguay (1933) provides that the state concerned shall not carry out the work necessary until it has come to an agreement with the other state.

The Argentina-Bolivia-Paraguay treaty of 1941 deals with the adoption of measures taken by common agreement for the utilization and development of the waters of the said river.

The Dominican Republic Treaty of Haiti of 1929 sets up a compulsory arbitration procedure and limits the parties’ right to the waters of international rivers to just and equitable uses having regard to the effect on each other’s water supplies.

The UN Watercourses Convention 1997 is a legal document that is applicable to the case of the Rogun HPP because, according to the definitions provided for in the Convention, Afghanistan, Tajikistan, Uzbekistan and Turkmenistan are ‘Watercourse States’ of the Amudarya River.

Article 4 of the Convention is about ‘Parties to watercourse agreements’

Clause 2 of the article says: A watercourse state whose use of an international watercourse may be affected to a significant extent by the implementation of a proposed watercourse agreement that applies only to a part of the watercourse or to a particular project, programme or use is entitled to participate in consultations on such an agreement and, where appropriate, in the negotiation thereof in good faith with a view to becoming a party thereto, to the extent that its use is thereby affected.

This clause unambiguously provides for the inclusion of other riparian states in the consideration and planning of a major project such as Rogun HPP.

The Part II of the UN Watercourses Convention 1997 defines the general principles related to equitable and reasonable utilization and participation, obligations not to cause harm, general obligations to cooperate, regular exchange of data and information, and relationship between different kinds of uses.

It is clear from the developments so far that some of the lower riparians have been deprived of their right under this section of the UN Watercourses Convention 1997.

In fact, as far as Rogun HPP is concerned, there seems to be complete disregard of the provisions and framework of the UN Watercourses Convention 1997.

The complete text of the UN Watercourses Convention 1997

The seismic assessment of the Rogun HPP site is also of concern.

Two prominent fault lines cross the site of the dam. 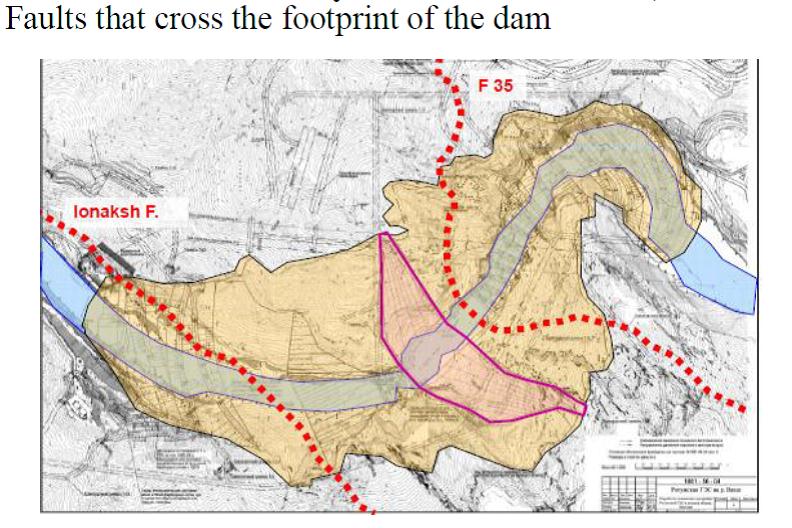 A World Bank report has evaluated the seismic risk and found it within the acceptable parameters. However, as we know about the unpredictability of the seismic activity and its shifting patterns, the size and capacity of the Rogun HPP must be cut down to eliminate the risk of a massive catastrophe at some point in the future.

The then-Secretary General of the UN, Ban Ki-moon, at the launch of the World Bank assessments on the Rogun HPP, recognized the challenges of the countries of Central Asia to meet their sustainable development and energy needs and appreciated the efforts of the World Bank in leading the independent assessment.

He encouraged the Governments of Central Asia to engage in a constructive discussion on the management of trans-boundary water resources in line with international law, and to refrain from unilateral actions. He said that such a discussion could lead to a sustainable, comprehensive solution that takes into consideration the interests of all of the countries of the region. He invited all stakeholders to avail themselves of the support offered by the United Nations Regional Centre for Preventive Diplomacy for Central Asia (UNRCCA).

It illustrates the legal balancing and mutually acceptable formats used in the cases of the Indus River, the Columbia River, the Mekong River, and the Senegal River.

The mechanisms, with due adjustments, could have been applied when planning the Rogun HPP for the sake of protection of interests of the upper and lower riparians.

Another document of UNRCCA that is relevant here is the ‘Early Warning on Potential Trans-boundary Water Problem Situations in Central Asia.’

It can be found at this link:

There is an endless stream of arguments to build a convincing case that the Rogun HPP is a unilateral enterprise and for all the right reasons it needs to be readjusted in size, capacity and timeline of implementation.

It would be advisable for Tajikistan to bring all the riparians into the loop for the sake of regional unity. This is the only way to ensure lasting and robust stability and prosperity. /// nCa, 3 November 2018