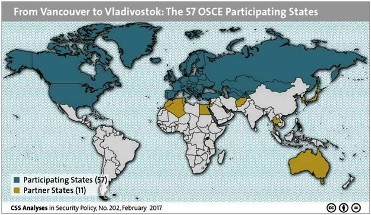 The OSCE needs to think out of not just one box but two boxes and we shall look at it a bit later – first, the credit must be given where credit is due.

On 30-31 May 2018, the OSCE, together with the government of Turkmenistan, hosted a conference titled ‘Good Governance and Economic Connectivity – Best Practices within the OSCE region.’

It was a meticulously planned event. Arguably, the main outcome was that it managed to position good governance and economic connectivity as inseparable elements vital to sustainable and sustained development.

According to its concept paper, the objectives of the conference were to:

Quite often, a word or phrase loses its impact factor because of its excessive use. We bring up certain words or phrases, which are ‘in’ or fashionable so frequently that they fail to evoke the image associated with them. The bulbs lights up dimly, if at all.

‘Good governance’ is in this unfortunate category.

Going back to basics, let’s reconnect ‘good governance’ to its intended image:

There are many ways to describe good governance. From the Council of Europe to GovernancePro, many institutions have put together the defining elements of good governance.

For our purpose, the explanation put together by the UNDP (2997 – Governance for Sustainable Human Development) seems most suitable:

All men and women should have a voice in decision-making, either directly or through legitimate intermediate institutions that represent their interests. Such broad participation is built on freedom of association and speech, as well as capacities to participate constructively.

Legal frameworks should be fair and enforced impartially, particularly the laws on human rights.

Transparency is built on the free flow of information. Processes, institutions and information are directly accessible to those concerned with them, and enough information is provided to understand and monitor them.

Institutions and processes try to serve all stakeholders.

Good governance mediates differing interests to reach a broad consensus on what is in the best interests of the group and, where possible, on policies and procedures.

All men and women have opportunities to improve or maintain their well-being.

Processes and institutions produce results that meet needs while making the best use of resources.

Decision-makers in government, the private sector and civil society organisations are accountable to the public, as well as to institutional stakeholders. This accountability differs depending on the organisations and whether the decision is internal or external to an organisation.

Leaders and the public have a broad and long-term perspective on good governance and human development, along with a sense of what is needed for such development. There is also an understanding of the historical, cultural and social complexities in which that perspective is grounded.

The conference was specifically devoted to ‘economic good governance.’ —– This is actually the merger of two ambitions: Economic Growth; and Good Governance.

Ms. Yuen Yuen Ang, in her admirable blog at the World Bank website, argues the importance of innovative solutions.

First she poses the question, which is also the title of her blog: Which comes first: good governance or economic growth? (Spoiler: it’s neither) 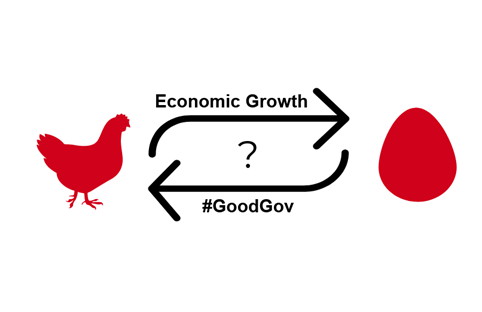 “My research finds a surprising answer to this debate. The first step of development is to harness normatively “weak” institutions to kick-start markets. This argument seems paradoxical, even impossible. But once laid out, the logic is obvious.”

“Taking history seriously, my book How China Escaped the Poverty Trap, traces the steps of economic-institutional changes in China from 1978 to 2014. This exercise reveals that development occurs in a sequence of three interactive steps, summarized below.” 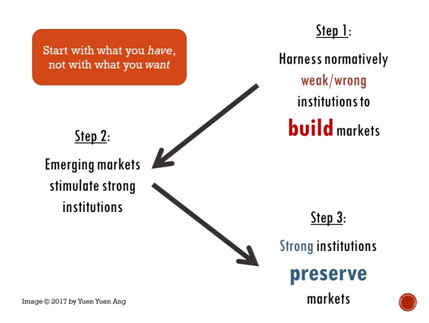 The complete blog post of Ms Yuen Yuen Ang can be found here:

How China Escaped The Poverty

‘How China Escaped The Poverty Trap’ is an excellent book that should be read by less developed countries’ political leaders and their policy makers. Indeed, it is not a question of which comes first, good governance or economic growth, but building on the strength of each particular economy. However, a stable political environment is needed because implementing regional or national changes, radical or not, requires time, much time, and continuity otherwise democracy could be seen to be abused. Each political party leader has its own agenda and believes that he/she has the recipe for economic growth. In less developed countries, no government can implement substantial changes in only one term. From this perspective, China is different. The author has recognized the specificity of each country and never suggested her approach as “one size fits all”. Her book is one of the best in political economy.

The purpose of quoting from the blog post of Ms. Yuen Yuen Ang here is that ‘OSCE region’ is not a politically or economically homogenous space. There cannot be a universally applicable solution for the entire OSCE region. Each of the 57 countries is unique in its own right and each has its own chosen direction and pace for development.

The events like the conference held on 30-31 May 2018 in Ashgabat can best serve their purpose if they are treated as incubators of ideas rather than workshops for carving out a roadmap.

When writing this piece, I came across a profoundly thought provoking cartoon strip of the Venezuelan artist Maria Guadarrama – Unspoken Truth.

Through art work, Ms. Guadarrama celebrates the concept of unity in diversity. 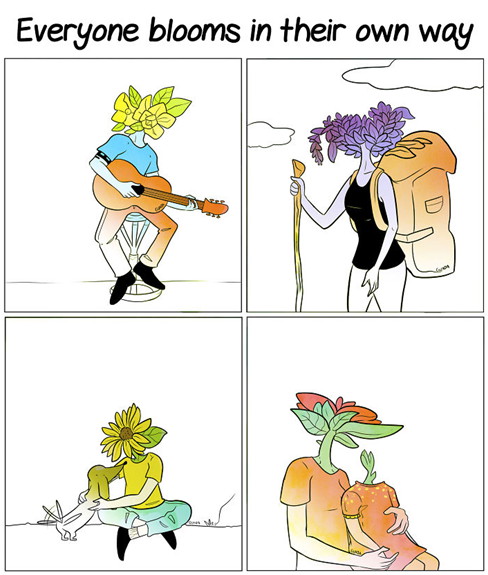 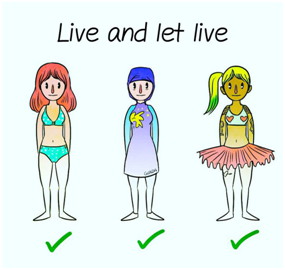 She also underlines the obvious: A journey is a step-by-step endeavour. It can rarely be a single leap. 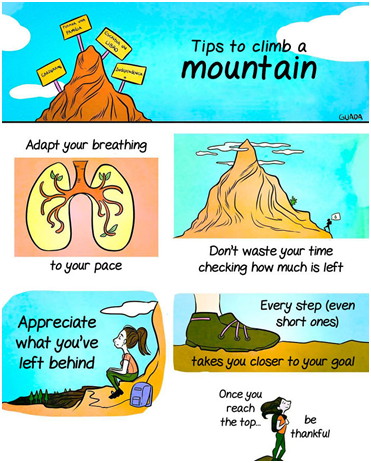 In the beginning of this piece I said that the OSCE needs to think out of two boxes. The good news is that for the past several years the OSCE has shown the signs of being aware of this challenge.

The flaw was in the early years of OSCE – the jubilation in the demise of the USSR and the desire to occupy as much space as soon as possible, basically to prevent the resurgence of Russia as a successor state of the USSR.

This was quite evident in the earliest ambassadors of the OSCE to this region.

During the last decade of the 20th century and the first few years of this century, the OSCE acted as an instrument of disruption, kind of NATO in civvies, a one-way lecture club.

I am a witness to at least two major incidents where the OSCE acted very dangerously and irresponsibly.

Nevertheless, past is past and now is now.

It is best to jettison to ditch the baggage of the past for the sake of smooth and light travel ahead. Herer is another cartoon of Ms. Guadarrama to highlight the point. 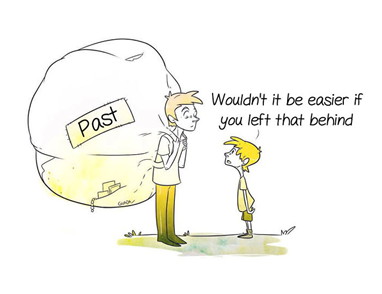 There were five thematic sessions in this conference. They featured 20 speakers, of which only 4 were from the Central Asian region.

Does it imply that Europe has everything to teach but nothing to learn from this region?

It is a question that cannot be answered one way or the other. Primarily, it is the question of the mindset.

The second box is that the OSCE region is somehow a self-contained space. This is a troubled idea.

The notion that the OSCE is all about ‘Security and Cooperation in Europe’ was shattered in its formative years when it started spreading fast beyond the borders of Europe.

The OSCE’s comprehensive concept of security, covering the politico-military; the economic and environmental; and the human dimensions would remain rather fragile if it doesn’t demonstrate vocally and convincingly that it is mindful of the diversity within and the volatility without.

Here is the map of the OSCE region: 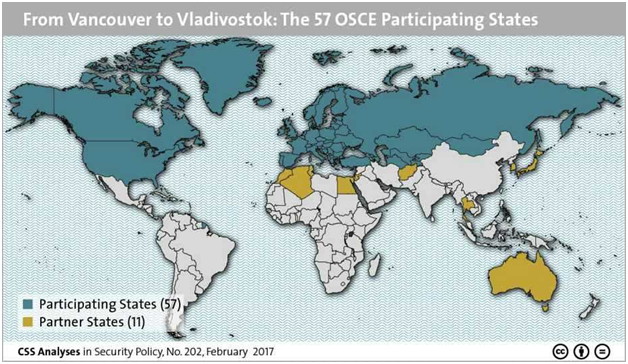 As can be seen in this map, the OSCE has a very long border with China. It also borders with Iran, and it has Afghanistan among its partner states.

The belt and road initiative (BRI) of China is going to encompass 69 countries, many of them the members of the OSCE. The global electricity grid led by China and expected to be in place by 2050 would be an infrastructure network worth some USD 50 TRILLION, spanning much of OSCE space. The trade, transit and communications corridors going in all directions are projected to touch many of the OSCE countries and China, Iran, South Asia and Middle East.

Iran is possibly returning back to square one, potentially sinking into a far deeper hole than it ever was in.

The activities of OSCE need to reflect the awareness of these realities.

On country to country basis, the example of the current ambassador of OSCE in Turkmenistan is among the great success stories.

Ms. Natalya Drozd has quietly transformed the interaction between OSCE and Turkmenistan. The main reason is that she is a seasoned diplomat from within the CIS space. She brings with her the insight to identify and promote what is best for both the OSCE and Turkmenistan. And, being an insider to the region, she knows how to argue the case for a mutually win-win outcome. This can be seen from the range and nature of projects done during her tenure.

This is also the example to plead the case that the OSCE ambassadors should be chosen for their ability to understand, and successfully interact with the host country. /// nCa, 4 June 2018