You are here: Home / Articles And Reports / Victory Day of Turkey 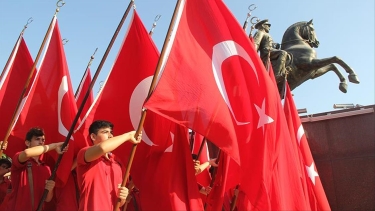 The holiday commemorates the decisive victory in the Battle of Dumlupınar, the last battle in the Greco-Turkish War, on 30 August 1922. Following the battle, Greek presence in Anatolia ended. Victory Day has been celebrated as an official holiday since 1926, and was first celebrated on 30 August 1923.

Here are the message of the President of Turkey and an article by the ambassador of Turkey in Turkmenistan on the occasion:

We are happy to celebrate the 99th anniversary of the great victory which is one of the cornerstones of our centuries-old glorious history.

I congratulate our nation, the Turkish Cypriots and each one of our citizens living in different countries of the world on the August 30 Victory Day.

I thank on behalf of myself and my nation all our friends as well as our brothers and sisters who share our joy on this day which is a source of pride for us.

On this occasion, I remember with grace Ghazi Mustafa Kemal Atatürk, the founder of our Republic and the Commander-in-Chief of our War of Independence, esteemed members of our Great National Assembly and gallant soldiers of our military.

The Great Offensive, started under the commander-in-chief of Ghazi Mustafa Kemal on August 26, 1922, ended in a decisive victory in Dumlupınar following the 4-day-long hand-to-hand combats.

The Turkish nation proclaimed with this glorious victory, which went down in world’s history of wars, that it would never bow down to any pressure in its homeland forged with the blood of martyrs.

August 30 is one of our history’s most critical milestones when our nation thwarted the hopes of imperialist intentions, which made estimates on its existence, and laid the groundwork for the foundation of our Republic.

These lands, which were made our homeland in Malazgirt in 1071, were once again acknowledged as our eternal homeland with this victory that our nation won despite all kinds of hardship and impossibilities.

The spirit, faith and will, which inspired the great victory, guide our nation today, too, just as it did 99 years ago.

The most important manifestations of this are our achievements in every area, from defense industry, economy and foreign policy to energy and our fight against proxy terrorist organization that threaten our country’s unity and integrity.

Today, our country has become a hope for not only its 84 million citizens living inside its borders, but also for its hundreds of millions of friends as well as brothers and sisters living in places that are dearly to itself, from the Balkans and Asia to Africa and Europe.

We will inshallah not frustrate these hopes with Allah’s help, the support of our friends, whose hearts beat with us, and the heartfelt prayers of our august nation.

Despite the ill-intentioned among us, we will continue to defend the rights of the oppressed and endeavor in order for peace, justice and freedom to prevail in the entire world.

Under the guidance of the faith that rose up in Dumlupınar 99 years ago, we as the 84 million will march towards our bright future in unity, peace and brotherhood.

With these thoughts in my mind, I remember with gratitude all the heroes of our War of Independence, first and foremost Ghazi Mustafa Kemal.

I wish Allah’s mercy upon our august martyrs and ghazis who sacrificed themselves for the sake of our homeland, adhan, flag and independence.

Happy August 30 Victory Day to my nation and all my brothers and sisters in the Turkish Republic of Northern Cyprus!” —– RECEP TAYYİP ERDOĞAN, PRESIDENT

The 99th anniversary of the start of the Great Offensive- the Victory Day: Paving the way for the foundation of the Republic of Turkey

Togan Oral, Ambassador of the Republic of Turkey to Turkmenistan

On 30th of August, we celebrated the 99th anniversary of the start of the Great Offensive, which was a major counterattack launched by the Turkish army under the leadership of Mustafa Kemal Atatürk, the father of modern Turkey, against the occupying forces in 1922.

The Great Offensive started on 26 August 1922 with the Battle of Dumlupınar, or the Field Battle of the Commander-in-Chief, and ended with the total defeat of occupying forces on 30 August 1922.

By the victory at the “Battle of Commander in Chief” led by the founder of the Republic of Turkey, Mustafa Kemal Atatürk, the Turkish nation -whose ancestors from Central Asia had settled in Anatolia for the first time through a victory at the 1071 Battle of Manzikert (Malazgirt) achieved by Great Turkish Emperor Sultan Alparslan- has perpetuated the fact that Anatolia is Turkish nation’s motherland.

As the occupying forces retreated from 31 August to 9 September 1922, the front line of the Great Offensive moved a distance of 300 km (190 miles). The Turkish army reached the Anatolian coasts of the Aegean Sea by liberating the city of İzmir on 9 September 1922.

In this regard, the Great Offensive, not only symbolizes the most glorious victory of the Turkish nation, but has also paved the way for the foundation of the Republic of Turkey on 29 October 1923.

Established in impossibilities by a nation of 13 million, the Republic of Turkey has currently turned into an important power in its region and beyond. Through its young and educated population reaching 85 million, competitive labor force, dynamic private sector and high-tech infrastructure, Turkey has successfully carried out big development initiatives, and has become among the top 20 largest economies of the world.

The Republic of Turkey pursues a multi-dimensional, enterprising and humanitarian foreign policy in order to ensure peace, stability, security and prosperity in its immediate vicinity and at the international level.

In this regard, Turkey has repeatedly proven its determination to overcome challenges it faces in a volatile geography marked by conflicts, irregular migration, epidemics, populism, xenophobia, Islamophobia, climate change and terrorism.

Turkey has sent medical aid to over 158 countries and 12 international organizations since the beginning the COVID-19 pandemic.

Turkey is also the largest humanitarian donor in the world, and the most generous country on the basis of per capita humanitarian spending. At the same time, Turkey is currently the top refugee hosting country in the world. It hosts more than 4 million externally displaced people, approximately 3.7 million of whom are Syrians under temporary protection.

Turkey, together with its allies and partners, continues to fight terrorism in its different forms and manifestations. Turkey resolutely stands against all such forces of evil, be it DEASH, PKK, PYD or FETO.

Moreover, in recent years, Turkish defense industry has witnessed significant leaps. It has achieved to increase the ratio of indigenous military hardware developed, designed, and produced by Turkey up to 70% by decreasing reliance on foreign products.

Turkey’s defense industry exports increased dramatically in recent years, reaching to over 3 billion USD in 2019. Our country is determined to continue its policies to ensure that the Turkish defense industry operates fully independently.

On the 99th anniversary of 30th of August Victory Day, we remember with respect and profound gratitude our eternal guardians, all our heroes, our dear martyrs and above all, the leader of our War of Independence and the founder of the Republic of Turkey, Mustafa Kemal Atatürk and his comrades in arms and also our veterans with the same gratitude.

I would like to once again celebrate the 30th of August Victory Day, together with our heroic Turkish Armed Forces which serve in the defense of our country in several fronts from Iraq to Syria, and from Mediterrenean Sea to Libya, hence contributing to regional and global peace throughout the world in line with Atatürk’s guiding principal of “Peace at Home and Peace in the World”.

Taking this opportunity on this remarkable occasion, I would like to emphasize that the brotherly relations between the Turkish and Turkmen people- which have a long and deep-rooted history, and rely on “one nation two states” principle- will continue to flourish on political, commercial, economic, educational, cultural, and social areas under the leadership of H.E. President Recep Tayyip Erdoğan and H.E. President Gurbangulu Berdimuhamedov. /// nCa, 31 August 2021 (in cooperation with Embassy of Turkey in Turkmenistan)