You are here: Home / Articles And Reports / Adaev – Where art and journalism meet 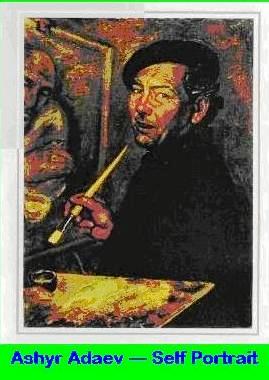 Ashyr Adaev – to his friends and to us, Ashyr Aga – was a man of many talents, the foremost being the flare for art and journalism. At some point in his life he must have confronted the question: To be an artist or to be a journalist.

He decided to be both.

Born in 1927 in a collective farm near Ashgabat and orphaned at an early age, he was raised by his uncle. His uncle died fighting in WWII while Ashyr Aga was still in his teens.

Left with no elder to support him, Ashyr Aga started working as railway engine driver’s helper and began learning to paint in his spare time.

In no time at all he started painting still life and landscape and graduated to portraits of impressive quality.

However, the satisfaction that usually accompanies the fulfillment of artistic talent was missing.

That is, until he joined Tokmak. 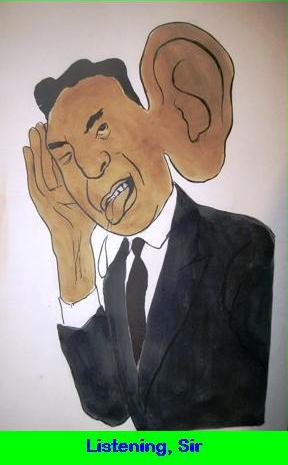 Tokmak was a satirical magazine in the Turkmenia SSR (the present-day Turkmenistan). It was published in the Turkmen language and was available for circulation in the territory of Turkmenia SSR only. The magazine, rich in satire and humour, carried poems, articles, sketches and caricatures of very high quality.

Tokmak was a smaller version of the legendary Krokodil (Crocodile) magazine that was published from Moscow from 1922 to 2005.

Tokmak specialized in pointing out the misdeeds, follies and pettiness of the bureaucrats. Tokmak means mallet, the kind of hammer used by a judge. The authors and artists mostly didn’t name the person who was under their hammer but because of the small population of Turkmenia SSR it was not difficult for the readers to identify the butt of the satirical jab.

The people loved Tokmak. The bureaucrats also loved it except for those who were at the receiving end of Tokmak. More than the visit of the official appraiser or auditor, the bureaucrats feared Tokmak.

A mild-mannered and patient man, Ashyr Aga ran Tokmak during its peak years. Here we are producing three samples of his work for the magazine. One of them – Flowers for the Boss – needs some background explanation. The sycophant is putting two flowers in the vase, apparently to please the boss. However, in the CIS space, odd number of flowers are for the living people and even number of flowers are for the dead. 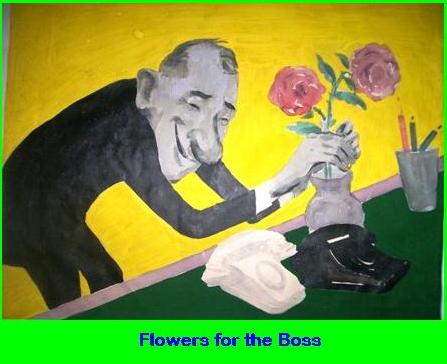 Gulshan Ashyrovna, the daughter of Ashyr Aga, and the academy of fine arts of Turkmenistan, organized on 10 June an exhibition of his works. Gulshan is a well known journalist and she went to great lengths to gather together the friends and colleagues of Ashyr Aga for the occasion.

One of them was Vladimir Pavlotski, who was for several years the honourary consul general of Poland in Ashgabat. He is 92 and holds the highest title available to art workers (People’s Artist). Another was Eduard Serapian, also a titled artist.

Pavlotski has lost the use of his eyes, and can hardly walk a few steps. Serapian is only slightly better in health. Their presence in the gathering showed the great regard they had for Ashyr Aga. 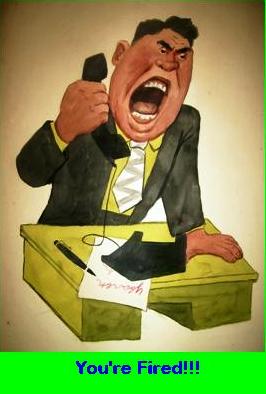