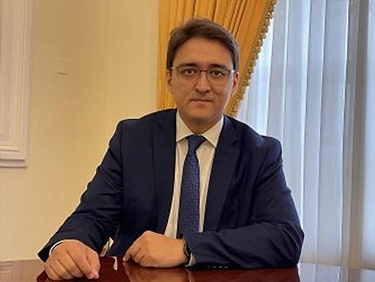 Bobur Usmanov, Deputy Director of the Institute for Strategic and Interregional Studies under the President of Uzbekistan

The Organization of Turkic States is a new phenomenon of global changes at the regional level that emerged in Eurasia as a result of modern geoeconomic realities.

According to experts, the participating countries of the Organization have significant potential: the human resource is about 170 million people; they occupy the 13th place in the world in terms of GDP, which amounted to US$ 1.4 trillion in 2021. The trade turnover between the members of the organization is US $ 21 billion. The annual growth rate of industry in the organization’s states averages 8-12%, and the share of industry in the GDP is about 24%.

Uzbekistan has been participating in the OTS as a full member since 2019. Joining the organization was the result of the intensification of Tashkent’s multilateral diplomacy carried out in recent years.

Our country is the second Turkic-speaking state after Türkiye in terms of population, having enormous economic potential with a dynamically growing economy.

The OTS states account for 22.4% of the total trade turnover of Uzbekistan. Over the past 5 years, mutual trade with the states of this organization has grown 2.4 times, amounting to US $9.4 billion by the end of 2021.

The increased interest of Uzbekistan’s participation in the activities of the OTS is primarily due to the following reasons:

Firstly, joining the organization clearly fits into President Shavkat Mirziyoyev’s modern foreign policy strategy, which is establishing a new model of relations with external partners and international structures. Uzbekistan is a key player in the Turkic world due to objective factors and historical, cultural, civilizational, geographical, geo-economic parameters.

Secondly, the organization is an effective platform for solving topical issues of developing cooperation in trade, economy, transport, energy, tourism and cultural and humanitarian spheres, coordinating efforts to ensure peace and security in the region, consolidating efforts to counter the global challenges of our time.

Thirdly, participation in the work of the OTS as a permanent member gives Tashkent additional political and diplomatic resources for the broad promotion of its initiatives on the world stage, and also strengthens the international authority and status of the country as one of the centers of the Turkic-Islamic civilization.

Uzbekistan’s entry into the organization is already demonstrating its high efficiency. In just three years, the president of Uzbekistan Shavkat Mirziyoyev, has proposed more than three dozen initiatives and proposals for advancing and intensifying collaboration with the organization’s member states.

They include the establishment of a Center for Research on Trade Cooperation of the Turkic States, adoption of the Program of Connectivity of the Participating Countries in the Transport Sector within the OTS, and the creation of a Permanent Platform of Experts and IT Specialists.

Today, we are witnessing the organization’s successful activity, which is due to the combination of its participants’ common interests in the cultural and humanitarian spheres with the dynamic development of trade and economic ties, as well as the OTS’s fast  adaptation to the world’s rapidly changing situation.

The Samarkand Declaration will be adopted at the end of the summit. It will reflect the assessment of the activities of the OTS, the coordinated approach of the member States regarding the prospects for its development and the position of the member-countries regarding the current international and regional situation. The document will also outline the main decisions of the summit and the initiatives proposed by Uzbekistan and other member countries of the organization.

The chairmanship of the organization for the period 2022-2023 will be transferred from Türkiye to Uzbekistan. In this regard, active preparation for work in this status has already begun in the country. Tashkent intends to actively promote the entire development agenda of the OTS and implement the agreements reached.

The adoption of the OTS Strategy for 2022–2026, which aims to improve coordination of measures in the field of food security, intensify trade and economic ties, form an interregional extensive transport and communication system, strengthen cooperation in the energy sector, and consolidate efforts in the field of digitalization and high technologies, will also be a landmark event at the meeting of the leaders of OTS countries.

Uzbekistan will consistently work to maximize the use of the organization’s reserves and fully contribute to increasing the potential and capabilities of the integration association of the countries of the Turkic world.

It is safe to say that the Samarkand Summit will give a new impetus to the development of the organization of Turkic States and will lay a solid foundation for cooperation between the member states for the foreseeable future. Further cooperation within the framework of the OTS will be of great importance in terms of unlocking the enormous potential of good-neighborliness, unity and cooperation between nations and their peoples, laying a successful model of interstate interaction and solidarity. ///nCa, 11 November 2022 (in cooperation with Embassy of Uzbekistan in Turkmenistan)