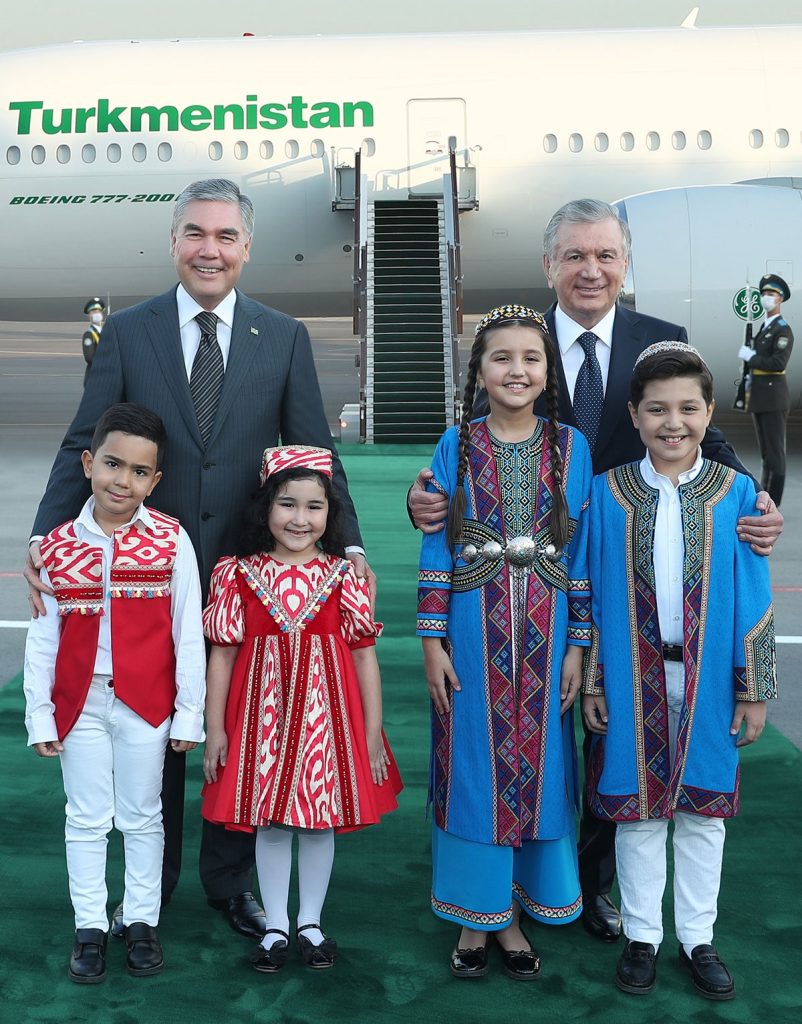 President Berdimuhamedov embarked on his two-day official visit to Uzbekistan on 4 October 2021.

There were several breakthroughs during the forum, the result of months of close coordination and consultations that would reshape the partnership of both the countries and send positive vibes across the region.

The Uzbek corporation Uzavtosanoat and Turkmen company Turkmenistan-Motors will jointly produce vehicles in Turkmenistan. The joint venture, in the first year of its operation, will produce up to 10000 agricultural machinery and trailers. The production capacity will be expanded to 50000 units per year within four to five years of the establishment of the facility.

There is also the mutual agreement to start jointly producing electrical appliances and products in Turkmenistan.

Reciprocally, there are plans to establish joint ventures in Uzbekistan for the gas chemical industry, deep processing of agricultural products, the production of finished textile and leather goods and footwear, as well as construction materials.

An important area where the working group led by officials of the level of deputy minister for foreign trade has already had its first meeting in September this year is the study to identify the products that can be purchased from each other but are currently being imported from third countries.

It was voiced during the forum that in 2020, Uzbekistan imported goods worth about USD 600 million from third countries that could have been sourced from Turkmenistan. Similarly, in 2020, Turkmenistan imported goods worth about 612 million from third countries whereas similar goods could have been found in Uzbekistan.

In this context of joint production, Uzbekistan mentioned that it has obtained the GSP+ status in the EU. It means that 6200 items of various products can be exported to the EU countries without duties. Uzbekistan urged the business community of Turkmenistan to consider joint production projects to take advantage of this facility.

An agreement has been prepared for simplification of mutual settlements in mutual trade between the economic entities of the two countries.

Another agreement has been prepared to create regulation of activities of the Turkmen-Uzbek border trade.

In all, 13 documents were signed during the forum, mostly related to import and export, with total value of about USD 13.5 million.

However, it must be noted that the economic forum was not a self-contained event. It connects with the preparatory work done before it and it contributes to the bilateral documents that would be signed today (5 October 2021) after the summit talks between the two presidents.

The total number of documents signed during the visit would be about 45.

This part of the report is taken from a Sputnik story:

According to the Minister of Finance and Economy of Turkmenistan Mukhammetgeldi Serdarov, in 2020 foreign trade turnover with Uzbekistan amounted to $ 410 million. He also noted that the structure of the export of Turkmen products to the neighboring state is changing noticeably. In particular, the share of products from the raw material industries is increasing: the volume of supplies of chemical fertilizers, inorganic chemistry products, vegetables, and textile products is growing. Agricultural products, technological equipment, building materials prevail in imports, Serdarov added.

There are 157 enterprises operating in Uzbekistan with the participation of Turkmenistan, including 65 joint ventures and 92 with 100% Turkmen capital.

There are four economic entities operating in Turkmenistan, and 11 investment projects with the participation of Uzbek capital worth more than $ 12 million have been registered.

Taking into account the indicators of economic interaction, Deputy Prime Minister of Uzbekistan, Minister of Investments and Foreign Trade Sardor Umurzakov noted that there are a number of specific areas for expanding partnership.

For several years, the trade turnover between our countries has tripled and continues to grow. Despite the pandemic, in the first 8 months of this year, according to our statistics, bilateral trade showed an increase of almost 25%. This speaks of a colossal potential, which, unfortunately, has not yet been fully utilized.

Another important area in deepening economic partnership is the development of industrial cooperation.

In very many areas and sectors, our economies should and can effectively complement each other. We can achieve this by creating continuous value chains, taking into account the comparative advantages of the two countries. We could create joint ventures both in Turkmenistan and in Uzbekistan.

Another area of ​​cooperation, which the minister noted, is the deepening of transport and logistics partnership. It is not only about the access of goods of both countries to each other’s markets, but also about building up the transit potential of the republics. As Umurzakov said, for this a separate working group has already been created at the level of transport departments, which is engaged in the study of issues of further development of transport corridors and the provision of mutual tariff preferences for the next year.

Separately, I would like to draw the attention of business entities of Uzbekistan to the advantages and opportunities of the Turkmenbashi International Sea Port. Using its potential will allow Uzbek entrepreneurs to significantly expand their business, reduce transport costs, costs when exporting their products both to the markets of the South Caucasus and European markets.

As noted by the forum participants, trade in the chemical industry is developing at the most active rates. According to the chairman of the board of Uzkimyosanoat, Jurabek Mirzamakhmudov, if products worth $ 12.4 million were exported in 2019, then in 2020, exports amounted to about 30 million. This year, more than 50 million are expected. And the list of types of exported products will increase from four to nine items. He also added that not only the export of Uzbek products is growing, but also imports from Turkmenistan.

We import bischofite, there are agreements on the purchase of Turkmen products, in particular, polyethylene and polypropylene. We are ready to expand the supply of our new car tire plant. Conveyor belts aroused great interest among the Turkmen colleagues. In addition, we are ready to expand cooperation in the use of the Turkmenbashi port infrastructure.

Jurabek Mirzamakhmudov also added that within the framework of the upcoming visit of the head of Turkmenistan, it is planned to sign one of the largest contracts with the state concern “Turkmenhimiya” for a period of five years. Previously, such agreements were short-term – for one year.

According to Mirzamakhmudov, the possibilities of using the mineral resource base of Turkmenistan are being actively studied. First of all, we are talking about the deposits of iodine, bromine, the organization of the production of sodium sulfate, which is in demand not only in the construction industry of both countries, but also in neighboring states.

According to the official statistics, the trade turnover between the two countries in 2020 stood at $527 million, while the turnover in January-August of this year exceeded $418 million.

In the first eight months of 2021, the volume of international traffic through the countries increased by 13.5%. Within the Ashgabat agreement, the countries are participating in the creation of subregional transport corridors of Russia-Kazakhstan-Uzbekistan-Turkmenistan-Iran-Oman-India and China-Central Asia-Caspian-South Caucasus-Europe, which will allow them to directly enter foreign markets.

This part of the report is taken from TDH:

At the plane ladder, President Gurbanguly Berdimuhamedov was warmly and cordially greeted by the President of the Republic of Uzbekistan Shavkat Mirziyoyev, as well as members of the government delegation of Turkmenistan.

According to the established good tradition of hospitality, the distinguished guest is greeted by children in national costumes.

Then the motorcade of the Turkmen and Uzbek leaders from the airport went to the Monument of Independence and Humanism, located on the Independence Square.

The monument, symbolizing statehood, sovereignty and the desire of the Uzbek people for prosperity, is one of the main attractions of modern Tashkent.

On a massive granite obelisk rises a globe with an engraved outline of Uzbekistan. In front of the pedestal there is another monument “Happy Mother” – a sculpture of a woman holding a child in her arms. This deeply meaningful image testifies to the continuity of generations, a careful attitude towards centuries-old national traditions and spiritual values, which now ensure the unity and cohesion of the Uzbek people. 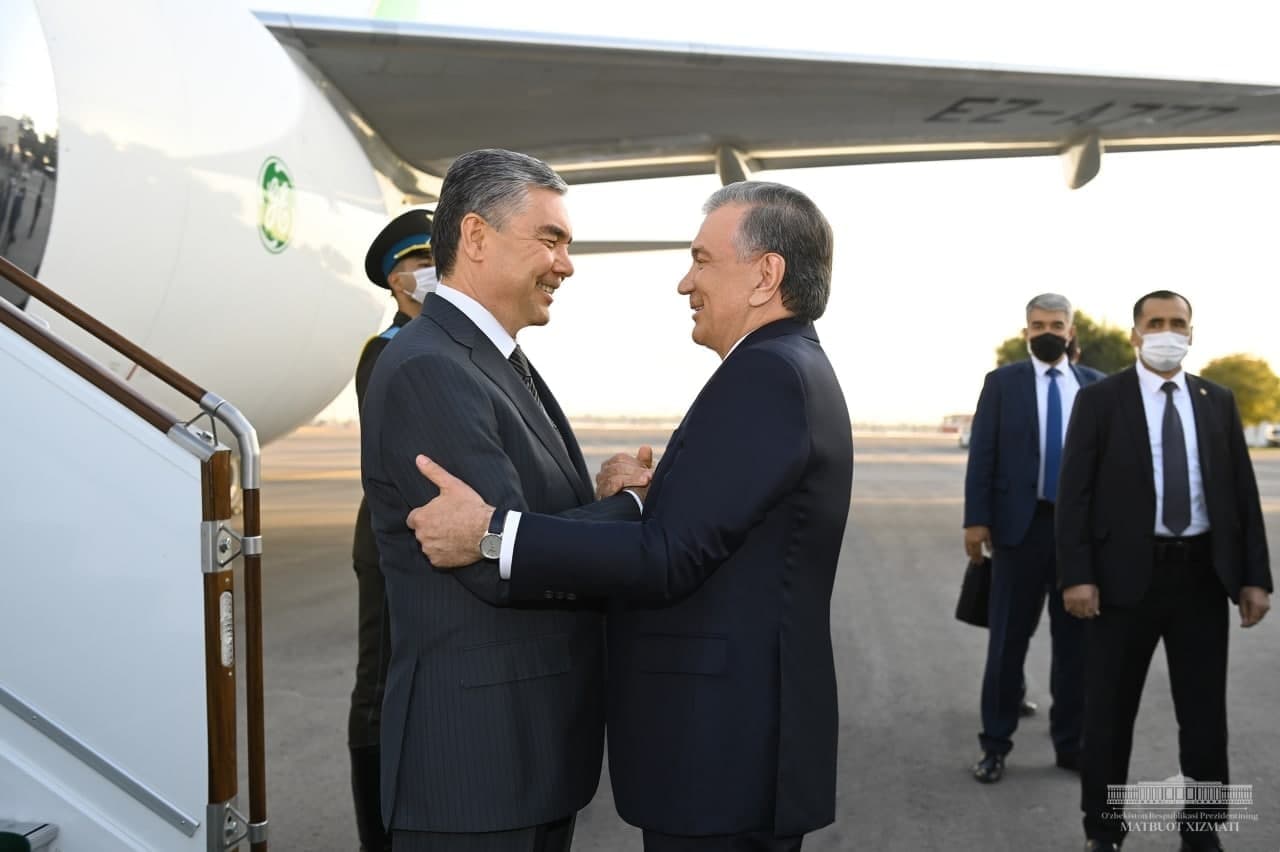 After laying flowers at the majestic monument, the head of Turkmenistan, together with the President of Uzbekistan, go by car to the Kuksaroy State Residence.

Tomorrow – October 5 – Turkmen-Uzbek negotiations at the highest level will take place, during which Presidents Gurbanguly Berdimuhamedov and Shavkat Mirziyoyev will concretize the approaches of the parties to further building mutually beneficial cooperation, creating opportunities for the fullest realization of the existing potential.

Let us recall that preparation for this visit became one of the central topics of discussion at the last meeting of the Cabinet of Ministers of Turkmenistan, where it was noted that today both countries, diplomatic relations between which were established in February 1993, actively cooperate in political, trade, economic and cultural humanitarian spheres.

Only for the period 2007–2021. 23 mutual state, official and working visits at the highest level took place, which contributed to the strengthening of the established constructive dialogue, successfully built in the modern era on a bilateral and multilateral basis, primarily through authoritative international organizations and regional structures – the UN, OSCE, CIS and others.

Both countries pin great hopes on the upcoming summit meeting, which is important not only from the point of view of expanding bilateral relations, built on a long-term mutually beneficial basis, but also taking into account the actively developing dialogue in the Central Asian region.

Today, Turkmenistan and Uzbekistan are united in their desire to contribute to the positive development of regional processes, the strengthening of all-round ties between the states of Central Asia, the establishment of lasting peace, stability and security in the region, contributing to overall progress and prosperity.

Today, at a new stage in their state development, the fraternal states demonstrate a mutual desire to bring long-standing cooperation to a qualitatively new level, fully meeting the priorities of socio-economic development and the national interests of each of the parties.

The strategic nature of long-term partnership is evidenced by both successfully implemented large-scale joint projects, in particular, the construction of the transnational gas pipeline Turkmenistan-Uzbekistan-Kazakhstan-China, and only those planned for implementation.

Uzbekistan actively supports important global initiatives of Turkmenistan, including the formation of a modern transport infrastructure and the creation of new transport and transit corridors, which open up new horizons for deepening regional cooperation.

It should be noted that the expansion of trade and economic ties has always been and remains the dominant feature of interstate dialogue, as evidenced by the steadily growing trade between the two countries, despite the negative impact of the consequences of the global pandemic. The interest and readiness of the parties to further increase and diversify mutually beneficial partnership was confirmed during the 16th meeting of the Joint Turkmen-Uzbek Commission on trade, economic, scientific, technical and cultural cooperation held last month. /// nCa, 5 October 2021