You are here: Home / Articles And Reports / Turkmenistan switches to bicameral system of parliament – Why?

Turkmenistan has decided to switch to the bicameral model of the parliament. The announcement was made during the recent session of the Peoples Council (Halk Maslakhaty) on 25 September 2019 in Ashgabat.

The exact role this model is expected to play in the system of governance and society of Turkmenistan will be clear next year when the Constitutional Committee presents its recommendation at the session of the Peoples Council in 2020.

However, looking at how the bicameral model is popular around the world for various reasons, it is possible for foresee some of the benefits Turkmenistan can hope to reap from this switch over.

Starting from the basics, the unicameral legislature is the system of the government where a single central unit has got the exclusive right to make laws and decide upon government policies. On the other hand, a bicameral legislature is one where there are two chambers of parliament: generally a house of representatives and an upper house and they divide among themselves the legislative work and other responsibilities and authorities.

As can be seen from the map below, the bicameral system is the most prevalent structure of the parliament around the world, with more than 50% of the countries following this model: 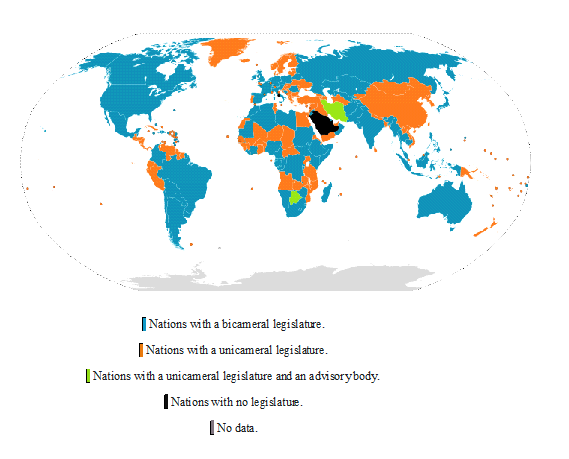 When looking for the reasons for Turkmenistan’s decision to switch to the bicameral system, one of the first things that come to mind is that the population is growing fast in the country and it is already putting great stress on the unicameral system.

For instance, the number of the children entering the school system in Turkmenistan this year was around 150000. Some ten year ago this figure used to be in the vicinity of 100000. In about a decade, nearly 50% growth has been seen in this number of children reaching the school age.

Also, because of the growing population, the public and private sector housing schemes are springing up in Ashgabat and every province. —– 1. The territory of Ashgabat was expanded by about 30% some years ago to accommodate the growing number of people in the capital; 2. A new town is being built within the expanded territorial limits of Ashgabat which would be equal in size to a mid-sized city in any other province; 3. A new city is being built some 60-km from Ashgabat to serve as the new capital of the Ahal province; 4. New residential areas are being developed in every province where a mix of the urban and rural lifestyle would be available to the owners.

When the population grows, it triggers a number of demands on the entire system. One such demand is the need for timely and effective legislation to deal with the new and emerging challenges. This is where the bicameral system justifies its suitability.

Moreover, in the unicameral system, sometimes there has to be a compromise between the grassroots representation and the need to bring the best possible talent to the parliament. Just hypothetically speaking, there can be a constituency where one person is highly popular but doesn’t have the necessary experience and skills for the legislative work while there is another person in the same constituency who has tremendous knowledge, experience and skills for legislative work but is not inclined to go through the hassle of elections. —– The bicameral system offers the possibility of bringing both of them to the floor of the parliament.

As we know, the national development plan of Turkmenistan for the period 2019-2025 is based on the aspiration to make the provinces economically and financially self-sufficient. This is a perfectly reasonable and doable goal.

This is how —– The governor of a province is the representative of the President of Turkmenistan. He is answerable to the central government in the shape of the cabinet of ministers and the presidential administration. The governor exercises his power and authority in a pyramid structure. Under him there are districts, cities and towns, each of which has its own governor and the governorate. Further down, the last link in the chain is the village administration which looks after one village or a cluster of villages.

Running parallel to this, down to the level of the village council, is the current structure of the provincial, district, city, and village Peoples Council. In other words, for every administrative arm of the government, there is a similar entity, at the same level, representing the people.

Weaving them into a strand without obliterating their separate identities is the secret to make the provinces self sufficient economically and financially. This can be done speedily with a bicameral system where the Peoples Council, as the supreme legislative authority, can act decisively and quickly to introduce legislative cover for the economic and social activities at the grassroots level because of its direct presence in every layer of the society.

There would be an additional benefit. As the provinces move closer to self sufficiency, they would be able to initiate and implement the measures for spreading economic opportunity to every member of the society, using the local talent and local raw materials. The Peoples Council, strengthened by its inclusion into the bicameral system, would be both its partner and mentor.

Also, looking from another angle, and based on the experience of many countries, it can be said that the bicameral system is supportive of the process of nation building.

This is what immediately comes to mind about the usefulness of the bicameral system for Turkmenistan. We will have to wait till next year to find as to how the people of Turkmenistan react to this idea when the Constitutional Commission presents its recommendation based on the input from the society. /// nCa, 27 September 2019