You are here: Home / Articles And Reports / Central Asia – Caucasus: 2018 – The Year of Opportunity for France

Gilles Remy, CEO of CIFAL Group, Vice-President of the Eurasian Commission of Foreign Trade Advisers, Chairman of the French-Turkmen Chamber of Commerce

Ashgabat, the 5th Asian Games in closed premises and in martial arts, September 2017.

2017 was a year of economic recovery for Central Asia and Caucasus. Following a sluggish phase, growth has resumed, driven by a rise in hydrocarbon prices. In most countries in the region, growth exceeded the world average, estimated at 3.5% for 2017. Formerly isolated, the area has become a trade corridor between Europe and Asia, at the heart of the Silk Road. Inter-regional cooperation, which had been very weak since these States gained independence, has been given new life under the impetus of China and the new vision of the leaders who have come to power over the past two decades.

Intra-regional diplomatic and economic exchanges experienced a new dynamic over the past year. One outcome with concrete results for the populations is the resumption of air travel between the countries’ capitals.

While this may sound banal from a European standpoint, it was not a given in a region where the prime focus of each newly independent State was to assert its sovereignty.

It is noteworthy that the new Uzbek president, S. Mirziyoyev, chose Ashgabat as his first international destination following his election. Likewise, the Turkmen president Gurbanguly Berdimuhamedow met with his Azerbaijan counterpart I. Aliyev in Baku last August. At this meeting, the two heads of state broached several sensitive issues that had been hampering good relations between the two countries : delimitation of the Caspian Sea’s territorial waters, potential paths for joint development of the Kyapaz/Serdar fields, and advancement of a Trans-Caspian gas corridor project.

Furthermore, increased exchanges with regional countries outside of CIS such as China, Afghanistan, Pakistan, India, and even the Middle East, illustrate an economic diplomacy that is both diversified and balanced. 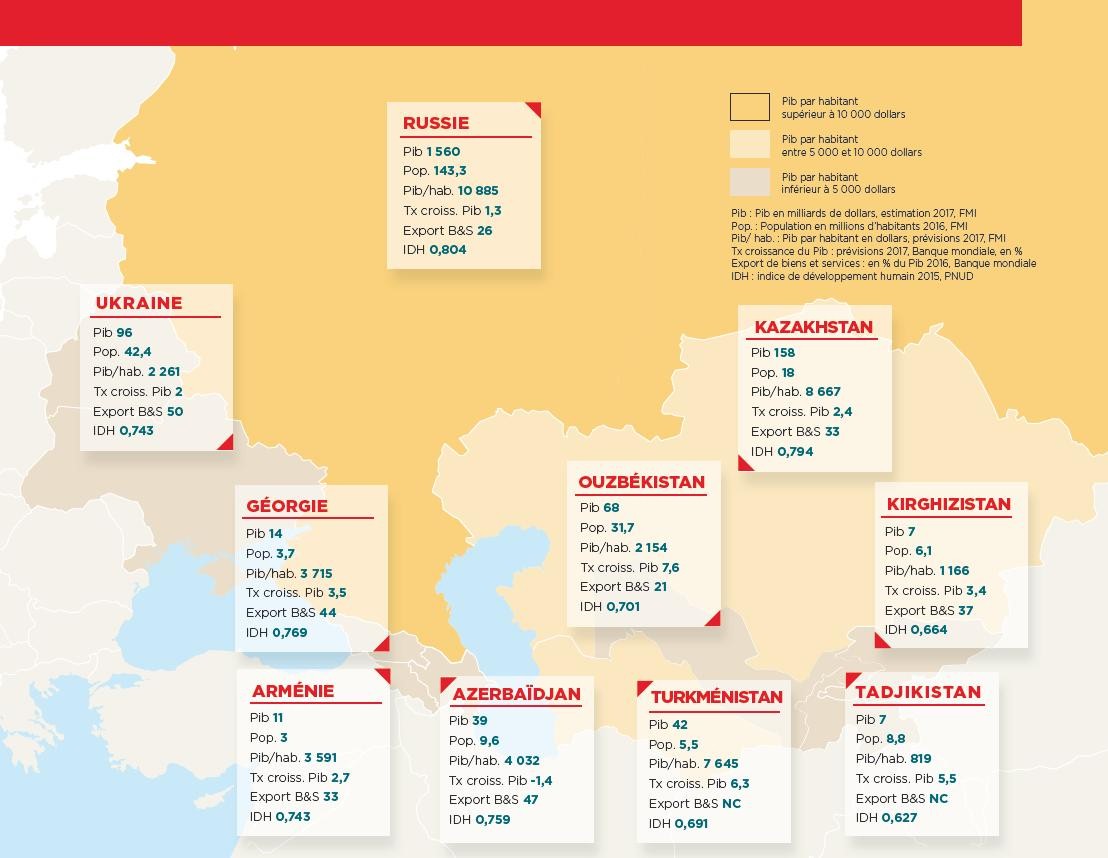 China : at the forefront of Eurasian integration

In this emerging regional integration, China stands at the forefront. The “New Silk Road” project launched by Xi Jinping in 2013 determines a large part of the region’s new logistical organization. China has a long-term vision and a capacity for investment that gives it the leadership in the region, including over Japan and South Korea, which have very dynamic economies. The Chinese government estimates that its “One Belt, One Road” initiative can generate a total wealth of 21,000 billion dollars. To accelerate investment in infrastructure, the Chinese authorities have created a 40 billion dollar fund dedicated to the project, in addition to the 50 billion dollars already invested in the region.

Two major projects already connect Central Asia to China. The first is an oil pipeline between Kazakhstan and China, built from 2001 to 2009, that has an annual capacity of 20 million tons of crude. The second project is a gas pipeline that transports Turkmen gas to China; the annual target is 80 billion cubic meters by 2020. Turkmenistan already supplies more than a third of China’s gas import requirements. At this stage, the relationship is shifting from dependency to interdependency.

Taking a stand on the international scene

The Central Asia/Caucasus region consists of eight countries from the former USSR, but four of them are truly key to the French market: Azerbaijan, Kazakhstan, Turkmenistan and Uzbekistan.

Azerbaijan, like most oil-producing countries, is emerging from two years of economic and financial hardship. After a 3.8% recession in 2016, economic growth barely attained 0.2% in 2017, but will reach 1.5% in 2018. Azerbaijan played a central role in the development of the corridors : it financed and supplied the TANAP and TAP gas pipelines for the European markets, built the Baku-Tbilisi-Kars railway, promoted the north-south train line, and developed the port of Alat, located south of Baku. With the impending launch of Shah Deniz phase 2 and the beginning of the development of Absheron, a return to strong and sustainable growth is guaranteed. French corporations such as Total, Engie, Alstom and Thales, supported by COFACE and AFD financing, play an active role in the development of these projects. For instance, the first of 40 locomotives ordered by Azerbaijan Railways was completed at Alstom’s Belfort factory in October 2017.

Turkmenistan has also chosen to develop its transportation infrastructures, in particular to Iran and Afghanistan. Likewise, the port of Turkmenbachi on the Caspian Sea is being completely modernized. The 5th Asian Indoor and Martial Arts Games, held in September 2017 in Ashgabat, funneled off a sizable portion of the country’s finances, but the games promoted a new Turkmen image across Asia, the Middle East, and throughout the Pacific. In 2018, growth will remain at the high level of 6.3%, a rate close to that of 2017.

More than any other country, Turkmenistan plays a crucial role – insufficiently recognized by Europe – in regional stability, namely through the TAPI project. The Turkmenistan-Afghanistan-Pakistan-India gas pipeline, expected to be operational in 2020, will convey 33 billion metric cubes of gas annually for 30 years from the Galkynysh field, the equivalent of three quarters of French gas consumption. This ambitious and costly project has the complete and unswerving support of the Turkmen authorities, who have a pressing need to diversity their buyers. It should also foster a more stable southern flank for Central Asia and firstly Afghanistan, by bringing together States with traditionally difficult relations around a common interest. The initial phase of the project was financed by the Asian Development Bank and the Islamic Bank, and is not closely followed by France or Europe. Yet aside from the opportunities it represents for our oil service companies, this project is currently the only example of a collaboration that benefits the populations of the four concerned countries.

As for the largest economy in the region, Kazakhstan, after two years of virtual stagnation (1.1% growth in 2016), it has resumed a solid pace of growth that should approach 4% in 2017 and 3.5% in 2018. The long-delayed operation of the giant Kashagan field has already produced significant results this year. With five million visitors, the Astana International Exposition devoted to the energy of the future was a resounding success, despite the isolated location of Astana. At a unanimously praised national booth, France presented its offering

in several innovative fields, and mainly sustainable cities and renewable energies. Kazakhstan is also asserting itself politically and diplomatically by hosting the negotiations in Astana for the Syrian de-escalation process, putting the regional powers at the same table as the parties to the conflict. 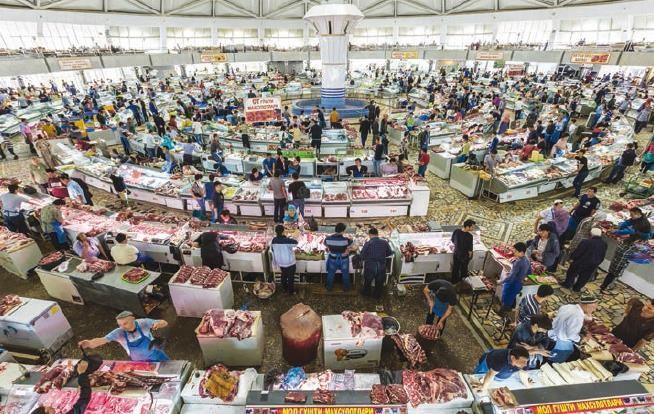 Uzbekistan, the market in Tashkent, the economic growth reached 6% in 2017.

In Uzbekistan, since the election of President Mirziyoyev in December 2016, the winds of change seem to be blowing, auguring an encouraging outlook for 2018. The convertibility of the national currency, the Sum, and the extension of the tourist visa to one month, are all signs pointing to the new Uzbek authorities’ wish to open up their country. Given the changes in progress, France is showing an interest in this country, the most populated in the region, and whose economic growth remains high and stable (6% in 2017, 5.4% in 2018). The AFD now finances many projects whose total amount next year could exceed the sum of its loans in all the other countries in the region. Nonetheless, our bilateral economic relations are lacking in major projects, given the potential between our two countries. The Uzbek president’s visit to Paris in early 2018 could rectify this situation.

What is France’s vision of the region ?

While the European Union has been relatively active diplomatically in Caucasus, it has shown neither a vision nor a strong interest in Central Asia other than to state – as it has for the past 25 years – its concern that it not fall back into the orbit of Russia. The involvement of the main European countries is limited. Great Britain, historically very active, is conspicuously missing from all diplomatic efforts, given its focus on managing the Brexit. The Germany of Angela Merkel, our main European competitor, has little sympathy for these countries, which they simply label as authoritarian. Germany’s domestic political instability does not make it predisposed to major international initiatives, in this region in particular. Italy, while very active economically, does not carry the diplomatic weight that these countries are looking for in a strategic bilateral relationship. France is therefore objectively the European country best positioned to develop a combined diplomatic and economic presence that is consistent with our fundamental interests.

In Caucasus, we have established a constructive dialog with Armenia and Georgia, though these markets are limited due to their small economies. Azerbaijan indisputably represents the largest stake for the upcoming period. The 100th anniversary of the first republic, which France had strongly supported in 1918, could be the opportunity for a fresh start in bilateral relations, upheld by a strategic shipbuilding collaboration with Naval Group.

In Central Asia, the investments of Total in Kashagan, and of Areva in uranium in Kazakhstan, clearly make our cooperation with this country a strategic priority, though there are questions surrounding who will succeed

President Nazarbayev, in power for more than 25 years. In Uzbekistan, the most populated country in the region, the arrival of a new president, whose visit is awaited in France, should allow us to re-establish and strengthen our economic relations.

Lastly, Turkmenistan offers assets and special features. The country has a unique status of permanent neutrality, and its president is clearly seeking a special relationship with France, at the highest levels. Our economic exchanges require a new impetus that can only be given at the highest levels of both countries. Several major projects, such as the signing of a contract with Thales for the observation satellite system the country requires in 2018, depend on it. Turkmenistan could offer us a stable and secure base on the borders with Iran and Afghanistan, countries with which it maintains strong relations and for which it possesses expertise that could be precious to us.

President Macron has made the fight against terrorism France’s diplomatic priority. Its success also goes through Central Asia. All these countries allocate significant resources to controlling their borders and combating jihadism. As secular countries of a Muslim culture, they protect religious freedom, which is virtually non-existent in the Arab-Muslim world. Their geographic position has become strategic for the world’s equilibrium. This rich region offers us a market with a development potential that is all the more appealing in that its needs match our know-how.

If France wants to, it can become their Western mooring and their leading European political and economic partner. It has the assets. Not least of them is the election of a young French president who is open and pragmatic. It will all play out in 2018.